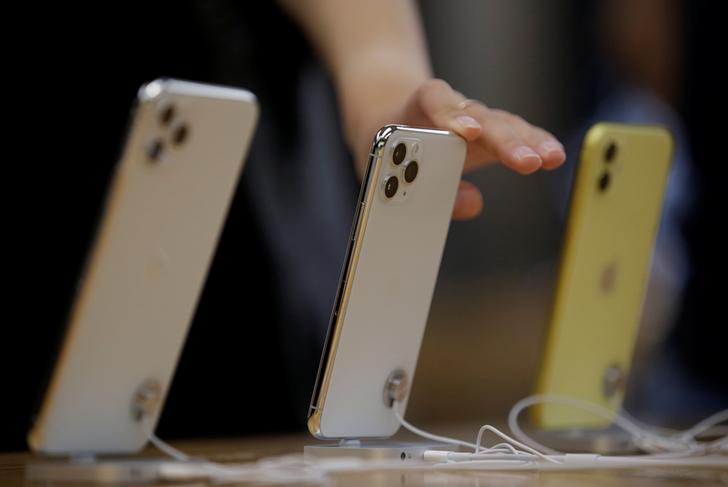 Risk crescendo. Apple and Margrethe Vestager are locking horns again. Europe’s competition tsar issued a “statement of objections” on Friday alleging that the $2.2 trillion iPhone maker abused its dominance over the distribution of music-streaming applications. Apple’s App Store charges an up to 30% fee when customers use it to subscribe to a service. Since Apple’s own music offering competes with streamers like Spotify Technology, Vestager reckons the company can use its smartphone dominance to discriminate against a rival.

The risk for Apple is this line of thinking becoming contagious. U.S. senators grilled representatives from the company last week about whether it was using its App Store to favour its own products. “Fortnite” creator Epic Games has already filed a lawsuit alleging that Apple abused its dominance. Bernstein analysts reckon the App Store’s gross profit this year will be $19.3 billion, or 13% of Apple’s total. Losing some of that would create some jarring disharmony for its stock price. (By Liam Proud)

SPACwater. British regulators are scrambling to join the special-purpose acquisition company boom. The UK Financial Conduct Authority on Friday outlined possible changes in rules governing blank-cheque vehicles under the guise of “strengthening investor protections”. It’s also an attempt to keep up. So far this year more than 300 newly listed entities have raised $96 billion for yet-to-be-determined deals, exceeding the total for the whole of 2020, Refinitiv data shows. The vast majority are in the United States.

London is a SPAC backwater because most vehicles are required to suspend their shares when they identify a target. That prevents investors who don’t like the deal from selling. The FCA’s solution is to lift the suspension requirement for SPACs that raise at least 200 million pounds, have ring-fenced funds, grant shareholders a vote on deals, and return the cash if they fail to secure a target. It’s up to the government to tackle another disadvantage: British liability laws discourage companies from publishing forecasts about their business in the way most firms listing through U.S. SPAC deals do. But by the time UK regulators have finished watering down their rules, the party may be over. (By Peter Thal Larsen)

Shadowland. Darktrace’s IPO surge only partially covers the cost of future risks. The Cambridge-based cyber security firm soared 40% on its stock market debut on Friday after pricing slap bang in the middle of its pre-listing range. Its 250 pence a share price on debut implies a market value of 1.7 billion pounds ($2.4 billion).

The float was priced to go. Concerns over investor Mike Lynch’s possible extradition to the United States meant that Darktrace Chief Executive Poppy Gustafsson played it ultra-safe. The listing price equated to 12 times Darktrace’s $199 million of revenue in the year to last June. That’s a fraction of the valuation of rivals like $47 billion CrowdStrike and $25 billion Zscaler, which trade at 54 times and 59 times their respective trailing revenue. Friday’s bounce means Darktrace is worth over $3 billion, or around 16 times sales. If it were to be priced at even half the multiple of its U.S. rivals it would be worth over $5 billion. Lynch is still casting a long shadow. (By Aimee Donnellan)

Banking on it. The world’s back office is front of mind. Companies and banks rely on their workforces in India to power their global businesses. Now employers are scrambling to secure vaccines and medical supplies for employees as Covid-19 cases in the country top 18 million and grave diggers work round the clock.

Deutsche Bank has 13,000 people on the ground, its largest staff presence outside of Germany. It has set up teams to help them tap urgent medical assistance, according to an internal memo to staff seen by Reuters Breakingviews. Standard Chartered Chief Financial Officer Andy Halford said yesterday that more than 4% of its 20,000 staff were infected.

Protecting people is a tall order. Even the country’s rich and well-connected are struggling to secure hospital beds for their loved ones. Many back offices are located away from New Delhi, the current epicentre of the crisis where an oxygen shortage has led to more deaths. But with the virus rippling across the country, they are now the recipients as well as the providers of support. (By Una Galani)

DBS shares rose 2% on Friday for a 4% gain on the week, while the two Hong Kong-focused lenders have added 9% each since Monday. The disparity is partly because much of the lender’s strength is already priced in: its shares trade on 1.3 times forecast book value, far above HSBC at 0.7 times, and StanChart at 0.5. With a return on equity of 15.4%, per Citi calculations, the primary question for investors is how much further DBS might go. (By Jennifer Hughes)

New Apple iPhones are displayed after they went on sale at an Apple Store in Beijing, China, September 20, 2019.