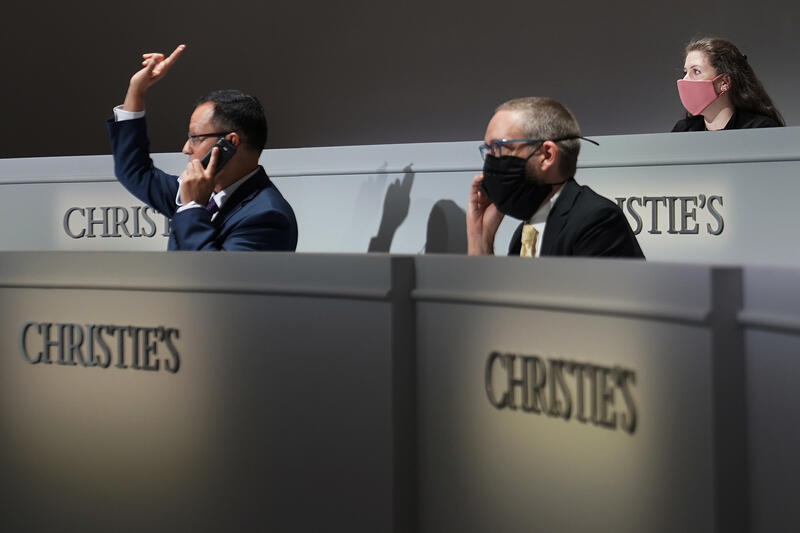 NFT WTF. The Christie’s single-lot auction is over and the artwork, a 5,000-photograph collage by artist Beeple packaged as a so-called non-fungible token, sold for a staggering $69.3 million including buyer’s premium. A flurry of late bids saw the price rocket from around $20 million in the final minutes of Thursday’s sale. It’s a landmark for digital art, trouncing the previous record of $6.6 million set days earlier for a video clip by the same artist, also known as Mike Winkelmann.

Beeple is a serious digital creator. And non-fungible tokens or NFTs – a blockchain-based way to ensure a work can’t be copied – solve a big problem that existed for virtual artists. Yet the sudden acceleration in interest and prices for NFT-based art, from trading cards to the piece Christie’s described as a “masterwork,” are also one more facet of the ongoing tech-crypto-online fever. Breakingviews has joked about joining another investing phenomenon, the craze for blank-check companies. Columnists should maybe now get busy with Photoshop, too. (By Richard Beales)

Minority report. Company bosses are feeling optimistic, up to a point. Three-quarters of chief executives surveyed by audit giant PwC said they expect global economic growth to improve in 2021, and over one-third of the 5,000 business leaders included in the poll said they were “very confident” that revenue growth will rebound in 2021.

Vaccines and a reopening of the economy explain the optimism. But there is also a significant minority of around a quarter of business leaders who reckon there will be no growth at all this year, or even a decline in output. Stock market analysts are more bullish: they expect the 1,585 companies included in the MSCI World Index to report 11% higher net income in 2021 compared even to 2019. That leaves plenty for disappointment if the more pessimistic view proves correct. (By Aimee Donnellan)

Coal minder. The impending departure of chairman and former BP boss Tony Hayward gives Glencore the chance to prove its green credentials. The 38 billion pound commodity miner-trader may have dug up 106 million tonnes of coal last year, but outgoing Chief Executive Ivan Glasenberg has pledged to run that down while lifting production of copper and cobalt, both crucial to the low-carbon economy.

The new chairman will have to adjudicate a crucial debate. Some shareholders want Glasenberg’s successor, Gary Nagle, to phase out coal sooner; others prefer a sale to maximise coal’s residual value, which is likely to do little for global carbon emissions. Hayward, remembered primarily for a catastrophic oil spill, was poorly placed to referee. His replacement doesn’t exactly have to be Greta Thunberg, but a corporate bigwig with a track record of taking climate change seriously would lend handy credibility to the group’s green turn. (By Ed Cropley)

Wide spread. Britain’s IG Group is getting love from investors – just not its own. The 3.1 billion pound spread-betting specialist is signing up retail traders at an astonishing pace. Over 40,000 new clients placed their first trade with IG in the final three months of 2020, the company said on Thursday, helping to boost its revenue by 65% year-on-year to 230 million pounds. It’s further evidence that the trading boom is not limited to the United States.

You wouldn’t know from IG’s valuation. Including debt, the company trades at 7.5 times expected EBITDA for 2021, well below a five-year median of 9.4, using Refinitiv data. After a 5% jump on Thursday morning, its shares are up about 50% from their March 2020 low; U.S. peer Interactive Brokers’ stock has more than doubled. A recent acquisition of Chicago-based tastytrade hasn’t helped: IG’s shares are down 7% since the deal was announced. Chief Executive June Felix’s job is to convince shareholders that the fun will continue. (By Liam Proud)

Wobbly trolley. British supermarkets are looking more like pandemic losers than winners. WM Morrison, the country’s fourth largest grocer, said on Thursday that even though like-for-like sales were up almost 9% in the year to January, pre-tax profit before exceptional items halved to 201 million pounds. Covid-19-related costs like extra payroll and bonuses soared to 290 million pounds. Meanwhile, the grocer declined to take government tax relief worth 274 million pounds.

Up in the air. Australia’s pandemic support is turning from work to play. With the government’s JobKeeper subsidy programme coming to an end this month, Canberra wants to prop up the struggling tourism industry by covering half the cost of 800,000 airline tickets as part of a broader A$1.2 billion ($930 million) package that also aims to preserve international travel jobs.

Internal borders between states have been quick to close when new virus cases arise, so it’s unclear whether the savings will tempt vacationers. What’s more, Japan’s similar discount scheme backfired last summer when it was blamed for spreading Covid-19.

Australia’s timing might be better than Tokyo’s, considering its successful containment measures. The budget impact also looks manageable. A typical discount airfare from Melbourne to the Gold Coast, for example, runs about A$200. That suggests the ticket tab could be around A$80 million. Travelers themselves would then help sustain visitor-dependent businesses. Economically speaking, it will be more about the destination than the journey. (By Jeffrey Goldfarb)

Employees of Christie's auctions speak to people on the phones as they bid on a 1663 rare first folio of 36 Shakespeare works that was sold for a record 8.4 million dollars (9.978 million with buyers fee) in the Manhattan borough of New York City, New York, U.S., October 14, 2020.