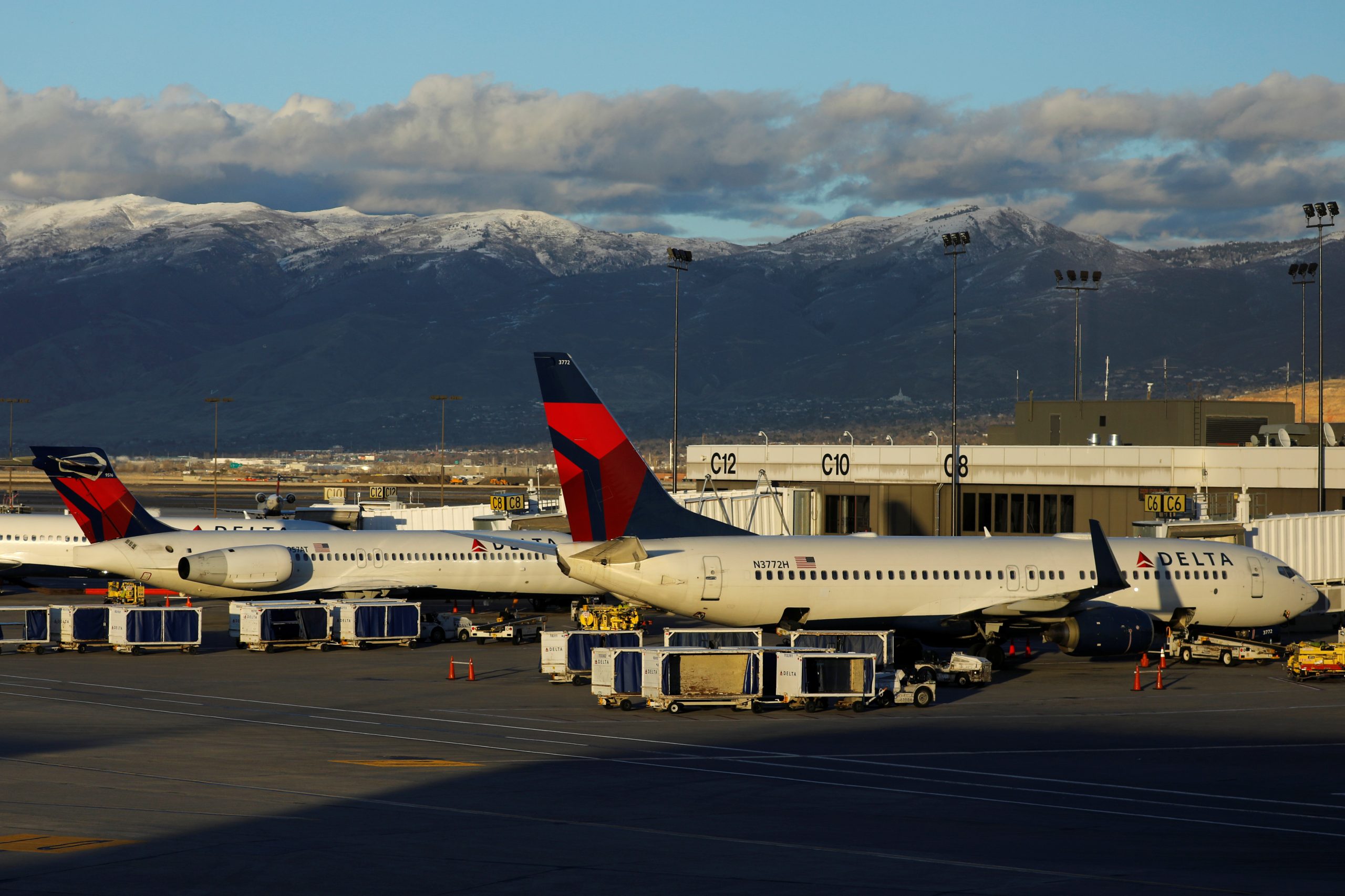 Better visibility. Delta Air Lines may have rounded the corner. The $30 billion U.S. carrier’s first-quarter earnings on Thursday revealed that cash flow turned positive in March. After five straight quarterly losses, boss Ed Bastian foresees a return to profitability in the third quarter. Delta’s shares slipped, but nonetheless it signals the beginning of the end of the pandemic.

It hasn’t come easy for Delta or its industry. The company has cut 33% of operating costs compared with the first quarter of 2019. Domestic leisure bookings are back to 85% of pre-Covid strength, but business and international travel remain in intensive care. International passenger demand in February was down 89% from two years earlier, according to the International Air Transport Association.

Delta will unblock middle seats on May 1, boosting domestic capacity at little extra cost. International flights, though, aren’t busy enough for that to matter. Things like the hoped-for U.S.-UK travel corridor need to materialize. Rich countries’ vaccine programs will help, but they need to get their border bureaucracies in order, too. (By Richard Beales)

The only wrinkle is outgoing Chief Executive Jean-Paul Agon has been making money faster than the Lancome mascara maker can spend it. Net cash is forecast to rise to almost 6 billion euros this year from 4 billion euros last year, Refinitiv data shows. That could enable some aggressive dealmaking. Bringing leverage up to 2 times EBITDA would give the French group 30 billion euros to play with. It could also put its shares in drugmaker Sanofi on the block, currently worth 10 billion euros. That would be enough to acquire Japanese rival Shiseido or clean up its shareholder structure by buying back most of Nestlé’s 44 billion euro stake. With the stock already up 9% this year, Agon’s successor Nicolas Hieronimus has time to decide. (By Dasha Afanasieva)

Onward and upward. BlackRock, the $122 billion asset manager led by Larry Fink, now looks after an eye-watering $9 trillion for its clients, it said on Thursday. Despite its focus on index tracking – a world of fee compression – the company managed 14% annualized organic base fee growth for the first quarter, easily outstripping the underlying 8% increase in assets.

Throw in a timely and successful-looking push towards sustainable investing plus growth in its technology services, and BlackRock’s earnings beat expectations. Its stock is up nearly 90% over the past 12 months, against a roughly 50% gain for the S&P 500 Index.

One thing that for BlackRock remains just “a conversation,” according to Fink, is cryptocurrencies. Crypto specialist Coinbase Global, which debuted as a public company on Wednesday with a diluted market capitalization of around $86 billion, is partly an exchange but also partly a facilitator of access to the market, a bit like BlackRock is for stocks and bonds. Digital currencies are hot, but Coinbase looks overvalued. Were Fink to make any crypto moves, that would become even clearer. (By Richard Beales)

Making the drugs work. Elliott Management may help put life into GlaxoSmithKline’s lengthy turnaround. On Thursday the Financial Times revealed that Paul Singer’s fund had built up a “multibillion-pound” stake in the $92 billion drugmaker. The activist is pouncing at a tricky time for GSK Chief Executive Emma Walmsley: her group’s shares trade on just 12 times forward earnings, a discount to peers like AstraZeneca, which is valued at 18 times, despite her plans to revive drug development and separate the pharmaceutical and consumer businesses.

There’s plenty of scope for change. Elliott could ask GSK to cut back on in-house research and development, and spend more on acquisitions to boost the otherwise lacklustre drug pipeline. Singer’s fund could also insist that Walmsley spin off the consumer division, rather than list it and hang on to a stake, a move that might make a takeover of either business easier. GSK’s shares rose 5% after the news. That suggests that if Elliott does make demands, it may be able to count on other shareholders’ support. (By Aimee Donnellan)

Strap in tight. Elon Musk fans around the world have ever more ways of showing their appreciation. Leverage Shares, a creator of exchange traded products, is listing one on Paris’s Euronext that offers exposure to just Tesla, leveraged three times. Such securities are quick ways of making short-term geared punts, without needing to open a brokerage account or dabble in derivatives. The ETP buys the shares and borrows in the market, taking a 75-basis point fee plus margin costs. Leverage Shares offers the product for other companies like Alphabet, as well as “inverse” ETPs, for betting against stocks.

There are reasons to be nervous about Tesla’s valuation. Even with its sales growth slowing, Musk’s group is still valued at nearly 100 times 2023 earnings, according to Refinitiv. Traditional carmakers like Volkswagen are catching up with their own electric vehicles ranges. The Tesla leveraged ETP is up 21% in the last month. Past performance is unlikely to be a good guide. (By Neil Unmack)

Credit where it’s due. The haggling over Credito Valtellinese (Creval) may finally be nearing its end. Suitor Credit Agricole on Thursday raised its bid for the Italian lender to 12.20 euros per share, rising to 12.50 euros if 90% of shares are tendered. At the upper end, that values Creval at 877 million euros, compared with 737 million euros under the original offer.

It’s still lower than the range of 900 million euros to 1.6 billion euros that Creval cited as a fair price. But at roughly half 2021 tangible book value, using Refinitiv data, the offer is high enough for a bank that will only make a 4.6% return on tangible equity in 2022, using the median analyst estimate. Credit Agricole should still make money: its return on investment at 877 million euros will be about 9.4% in 2022, according to Breakingviews calculations. Cost savings can nudge that higher. Creval shares were trading at 12.34 euros after the news – roughly in the middle of the French bank’s offer range, a sign that the latest price should be enough. (By Liam Proud)

Late delivery. Deliveroo’s first quarterly trading update as a publicly listed company looks appetising. The UK-based food delivery company led by Will Shu processed 71 million meal orders in the first three months of 2021, up 115% year-on-year. Roughly half those orders were in the United Kingdom. Even so, it’s trailing rival Just Eat Takeaway.com. The Amsterdam-based company on Tuesday reported it had handled 63.8 million UK orders in the first quarter, a 96% jump.

Yet investors trying to understand Deliveroo’s performance still face challenges. It reported gross transaction value per order in the UK of 25.2 pounds in the quarter. That looks superior to Just Eat Takeaway, which earned gross merchandise value of about 19 pounds per order in the UK in the same period, according to Breakingviews calculations. However, Deliveroo includes service and delivery fees in its measure; its larger rival does not. Investors remain sceptical: Deliveroo shares, which dipped 1% on Thursday morning, remain 47% below the IPO price earlier this month. (By Karen Kwok)

Disruption, interrupted. Sbanken, a 20-year-old digital upstart, wanted to be Norwegians’ favourite bank. It’ll now have to pursue that mission from within the financial establishment after agreeing to a $1.3 billion takeover by $34 billion domestic behemoth DNB. A chunky 30% premium to its undisturbed price looks alluring. At 1.5 times forward tangible book value, using Refinitiv data, it’s a one-third premium to the multiples of big Nordic peers. For its part, DNB can put excess capital to work, increase its mortgage market share to 27% from 24% and nab some digital expertise in the process.

Sbanken’s decision to sell is notable given all the hoopla about digital lenders disrupting incumbents. It turns out that’s harder than it sounds. Its loan growth slowed to 2.4% in 2020 and 2.9% in 2019, compared with 13.7% in 2017. Retail customer growth was a humdrum 3% last year. Sbanken is about a decade older than sexier European upstarts Monzo, Revolut, N26 and Starling Bank. The risk for them is that Sbanken is a sign of future mediocrity. (By Liam Proud)

SK-pop. South Korea’s SK Telecom is broadcasting a clearer signal to shareholders. The $21 billion company led by Park Jung-ho unveiled plans to split itself up by spinning off technology investments, including stakes in chipmaker SK Hynix and e-commerce outfit 11street, from its dominant but low-growth mobile and broadband businesses.

Specifics like share ratios and dividend policy remain to be seen, but the basic idea is promising. Assume the telecom business is valued at 5 times the EBITDA that Citigroup analysts forecast for 2021, and it would be worth about $16 billion after backing out net debt. They also estimate the combined net asset value for the rest at about $23 billion. Apply a 40% discount for the sprawl and many unlisted assets and it drops to $14 billion. That still implies a potential post-split valuation uplift of nearly 50%.

SK Telecom is also eyeing “diverse investment activities” for the new entity. It’ll have to get those right to fully realise the restructuring benefits. (By Jeffrey Goldfarb)