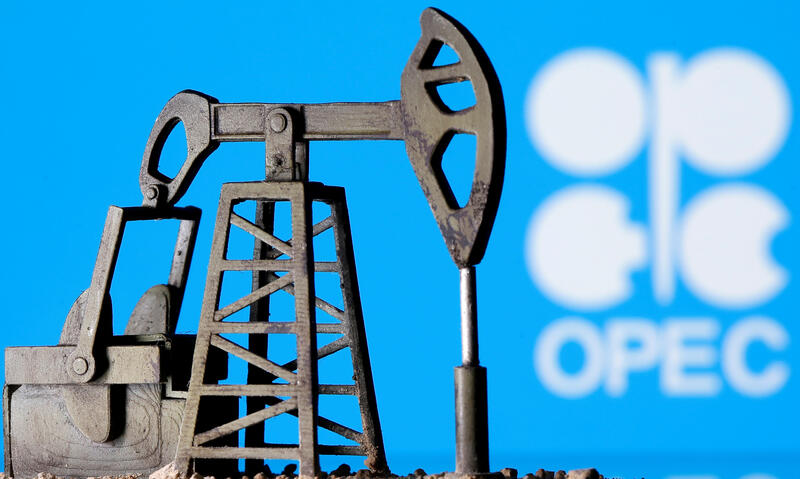 Flow motion. OPEC+ is betting on economic recovery later rather than sooner. The Saudi-led oil cartel and fellow traveller Russia agreed on Thursday to extend cuts to the global supply of oil to the tune of 7 million barrels per day, around 7% of what the world consumes normally. With demand due to outstrip supply by 400,000 barrels a day this month, according to OPEC+ forecasts, the largest fossil fuel producing countries could have prised open the taps.

That they chose not to points to nervousness about the economic prospects. After predictions before the OPEC+ meeting of an additional 500,000 barrels per day of output, the surprising restraint pushed crude prices up 5% to their highest price since January 2020, before the pandemic. Yet in OPEC’s eyes, that does not presage a return to normality. Crude prices may have risen 30% this year, but major economies are still under partial at lockdowns. Mutating virus strains and hesitant vaccine roll-outs could yet delay reopening. Better to wait another month than risk an overshoot. (By Ed Cropley)

Scraps. Apollo won’t have to be too creative with Michaels. On Wednesday the craft retailer said it was selling itself to Apollo Global Management for $3.3 billion. That is some 15 years after the company was sold to private equity firms including Bain Capital and Blackstone for nearly twice as much. By many measures, Apollo has gotten a screaming deal.

The private equity group offered $22 a share, a hefty 47% premium to Friday’s price, before a deal was mooted by the New York Times. Sales of yarn, fabric markers, frames and the like have done well over the past year, according to earnings on Thursday. Even so, the all-cash offer for shares values the company at a price-to-2020 earnings ratio of more than 11 times.

That is the highest it has been in around three years, according to Refinitiv, but still much lower than what other specialty retailers like Home Depot sport. It is also far less than the triple-digit multiple the group paid in 2006. This is one project that may not need too much work. (By Lauren Silva Laughlin)

The company most recently valued at over $7 billion is expected to choose a temporary dual-class share structure, allowing founder Will Shu to retain more control for three years. There’s just one problem: the new rules don’t exist yet. Rather than wait for the Financial Conduct Authority to design them, Deliveroo is likely to initially opt for a less prestigious “standard” listing, which permits shares with special voting rights. As it was probably planning all along. (By Karen Kwok and Peter Thal Larsen)

Battery charge. Blank-cheque companies can lay out their dreams more freely than in a traditional initial public offering. Sustainable Opportunities Acquisition’s merger with DeepGreen Metals takes that to a new level. The Canadian target aims to extract metals for electric-vehicle batteries from the bottom of the Pacific. It’s fascinating and potentially game changing for the industry.

The special-purpose acquisition company reckons the deal enterprise value of around $2.4 billion is just 35% of the net present value of expected cash flows from a DeepGreen project called NORI-D. That suggests a fat cushion for likely delays and extra costs related to an effort that won’t see revenue until 2024 and lasts for at least 22 years thereafter.

Yet the chosen discount rate for NORI-D cash flows is 9%. That’s low for a risky project. At 15%, the deal enterprise value and the project NPV are on a par, Breakingviews calculates. That would mean zero cushion. SPAC investors evidently have more enthusiasm for EVs than the time value of money. They may regret that omission. (By Richard Beales)

Pandemic punt. Permira is looking for a post-pandemic bargain. The private equity group is in talks to buy U.S.-listed medical devices manufacturer LivaNova for over $80 a share, which would value the company, which makes heart valves and nerve therapy systems for chronic depression and epilepsy, at around $4 billion, according to the Financial Times. The news on Thursday lifted shares in LivaNova by 3% to $78.50.

Convincing investors to accept an offer at that price could be tricky. Activist shareholder PrimeStone, which revealed a 2.2% stake in the company last October, argued that the business could be worth more than $100 a share, when valued according to the sum of its parts. LivaNova’s share price has been weighed down by Covid-19 as hospitals throughout the world have cancelled non-emergency procedures. But an offer at the mooted $80 area would be worth less than the group’s share price before the pandemic. With vaccines being rolled out, and countries emerging from lockdown, LivaNova may be better off waiting for a higher price. (By Aimee Donnellan)

Dry spell. The global chip drought could get dryer. For the first time in 56 years, Taiwan, home to the $580 billion Taiwan Semiconductor Manufacturing, did not experience any typhoons in 2020. Scant rainfall over the past few months worsened a water shortage. Authorities on Wednesday unveiled unprecedented supply curbs across three counties, affecting 1.3 million households. Water reservoir levels in those regions have dropped below 20% of capacity. Bad policies, like low water prices, are to blame too.

That’s a headache for the world’s largest chipmaker, which has over two dozen factories in Taiwan. Making semiconductors sucks up a lot of water. A recent H2O outage in rival Samsung Electronics’ Austin, Texas facility docked an estimated $89 million from sales, according to Citi analysts. TSMC has resorted to buying truckloads of water, but there is only so much it can do against mother nature. Customers could be up creek. (By Robyn Mak)

Frosty response. Sweden’s Nordax Bank may have to raise the temperature on its bid for Oslo-listed Norwegian Finans. The would-be buyer on Thursday launched a $2.1 billion offer for the owner of Bank Norwegian. Private equity group Nordic Capital and Finnish insurer Sampo jointly control the bidder, and together also own 23% of the target. Nordax Chief Executive Jacob Lundblad probably hopes to cross-sell the two companies’ products to their customers and gain an underwriting edge by pooling data.

The question is whether he’ll reach the required threshold of 50.1% of Norwegian Finans shares. Given Nordic and Sampo’s support, Lundblad effectively needs just another 27%. But the shares on Thursday soared above 100 Norwegian crowns, well above Nordax’s offer of 95 crowns per share. The bid values the target at 1.7 times 2021 tangible book value, using Refinitiv data. Norwegian Finans traded at over 2 times in January 2020. Investors’ cool reception may force a rethink. (By Liam Proud)

Heal thyself. Serial corporate fixer-upper Melrose Industries could do with some self-improvement. On Thursday the $12 billion industrial buyout specialist announced a 69% drop in adjusted operating profit for 2020 after the pandemic revealed the cracks in its highly leveraged business model. Though net debt dropped 13% to 2.8 billion pounds, it’s still a toppy 4 times last year’s EBITDA.

A sale of Melrose’s air conditioning unit, which Chief Executive Simon Peckham confirmed is in the pipeline, would hasten a revamp. Assume it raises 2.5 billion pounds. Melrose’s other industrial businesses might be worth around 12 billion pounds, according to a Breakingviews calculation using Investec analysts’ operating profit forecasts for 2023 and peer multiples. Subtract debt and Melrose’s equity would be valued at 11.7 billion pounds, over a third higher than on Thursday morning. The disposal would also give Peckham more M&A ammo for his next target. That adds up to a welcome lick of paint. (By Christopher Thompson)

A 3D printed oil pump jack is seen in front of displayed Opec logo in this illustration picture, April 14, 2020.