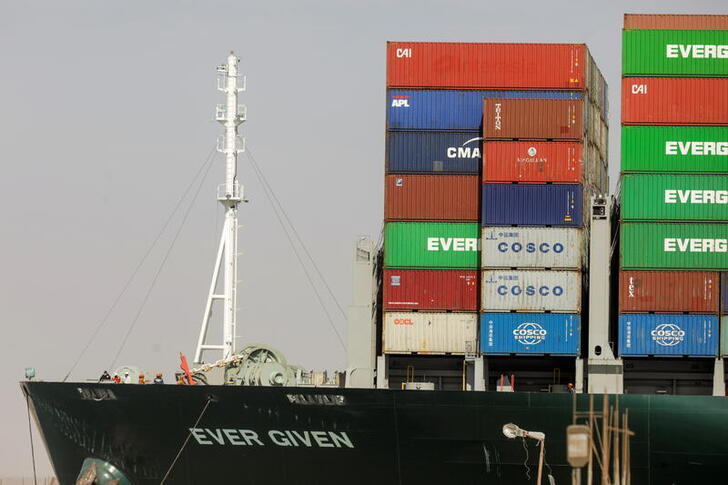 It’s virtually free. Companies that service Wall Street-from-home are feeling their oats. On Monday Broadridge Financial Solutions, an $18 billion fintech firm that facilitates companies’ investor communications and compliance technology, said it would buy trading platform Itiviti for roughly $2.5 billion. Broadridge shares have risen 60% in a year, aided by companies and their advisers taking more of their communications online.

Still, the deal is richly priced. Broadridge is paying 10 times Itiviti’s revenue last year, more than twice as high as Broadridge’s own equivalent multiple. What’s more, Broadridge’s multiple is near a high. The fact the company is paying in cash rather than its own generously valued shares suggests it doesn’t see a risk to waning interest in virtual work as the world opens back up. Broadridge’s investors don’t either – the company’s stock was up almost 3% on the news. (By Lauren Silva Laughlin)

Sue us. The Ever Given’s removal from its unscheduled berth in the Suez Canal on Monday allowed for the smooth resumption of trade between Asia and Europe. It also opens up an epic legal battle over who is owed what for the week-long debacle. The bill could run into billions.

Egypt can justifiably claim $100 million in lost transit fees, especially if it has to offer cut-price rates to the 400-odd ships held in line. Meanwhile, operators like Moller-Maersk have re-routed dozens of vessels around South Africa, a detour costing probably $500,000 per ship in fuel alone. But that’s chicken feed compared to the other claims stacking up against the ship’s owners, Japan’s Shoei Kisen KK, and UK P&I Club, the providers of its cover. Nearly a third of global container traffic goes through the canal each day. German insurer Allianz reckons the hit could be up to $10 billion. Lawyers, start your engines. (By Ed Cropley)

All that glitters. Norilsk Nickel shareholders are cashing in on high copper prices. The $48 billion Russian nickel producer is spinning off its Bystrinsky copper and gold mine, which generates $717 million of EBITDA. JPMorgan reckons the asset, of which NorNickel owns just over half, is worth around $6.3 billion based on spot prices.

The deal’s proceeds would be distributed among shareholders. The decision may sweeten investors ahead of a tussle over dividends between Interros, controlled by Chief Executive Vladimir Potanin, and aluminium producer Rusal. Coffers were stretched by a record $2 billion fine for a fuel spill last year. Interros is calling for lower payouts to fund investment in production and reducing the spill’s environmental impact. Rusal last year resisted a cut. The promise of a payout, after approvals which could take two years, may smooth negotiations. (By Dasha Afanasieva)

End of an era. Czech Republic’s richest man, Petr Kellner has died in a helicopter crash on a skiing trip in Alaska. The 56-year-old telecoms tycoon went from selling copy machines in the aftermath of the 1989 Velvet Revolution to amassing a $17.5 billion fortune, according to Forbes. The PPF conglomerate he founded took part in hundreds of privatisations and now owns 49 billion euros in assets across sectors including telecoms and banking. Shares in PPF’s lender Moneta Money Bank fell almost 3% on the news while O2 Czech Republic slipped just 0.4%, perhaps reflecting the balanced leadership at the investor.

The death is a huge loss for Czech Republic’s business community. But it appears the billionaire died doing what he loved: while keeping a private profile, he seems to have been a fan of winter sports, pictured snowboarding in one of his company’s annual reports. (By Dasha Afanasieva)

Spanner in the works. The European Union’s 750 billion euro post-Covid rescue plan has hit a legal hurdle. Germany’s top court on Friday suspended the ratification of a Berlin-approved law authorising the European Commission to issue EU bonds to fund its recovery plan. The court must rule whether the plan constitutes illegal joint debt financing. That risks delaying EU funds. Without ratification by all member countries by May, the Commission will struggle to hand out some 13% of planned grants and loans before July.

Judging by past decisions, however, the German constitutional challenge is more likely to be a passing squall than a storm. The court has in the past questioned but finally approved EU developments, like the European Central Bank’s asset purchase programme. And the EU rescue plan won a large majority in the German Parliament. A compromise that reiterates the transfers won’t be permanent is in everyone’s best interest. (By Lisa Jucca)

Small is beautiful. Bigger is not always better in China’s financial sector. A trio of state-owned lending giants including the $296 billion Industrial and Commercial Bank of China each reported a surge in fourth-quarter net profit of over 40% from a year earlier. That’s a huge improvement from previous quarters, when banks were directed by Beijing to lend to pandemic-battered sectors resulting in heavy loan-loss provisions. Beat-up valuations are due a boost: CICC analysts reckon local bank stocks, most of which trade at less than 1 time book value, may rise over 40% over the next year.

Private line. Buyout groups have thrown another cat into Spain’s telecoms chicken-run. Less than a year after pouncing on number four operator MasMovil, KKR, Cinven and their buddies are taking a swipe at Basque country outfit Euskaltel. Their bid, worth 3.5 billion euros including debt, represents a modest 16% premium to Euskaltel’s closing share price last week. But at 10 times expected EBITDA for this year it’s still on the pricey side.

The private equity barons paid 8 times EBITDA when they snapped up MasMovil last June. Synergies should help the numbers stack up. Euskaltel, for instance, will be able to switch to MasMovil’s network, rather than leasing space off Orange and Telefonica. The buyers also get extra heft in any future consolidation of the ultra-competitive Spanish market. A rumoured tie-up with Vodafone’s local unit now looks distant. But if it happens, private equity may be calling the shots. (By Ed Cropley)

(The Norilsk Nickel item has been corrected to change billion to million in paragraph one.)

The Ever Given, one of the world’s largest container ships, is seen after it was fully floated in the Suez Canal, Egypt, March 29, 2021.