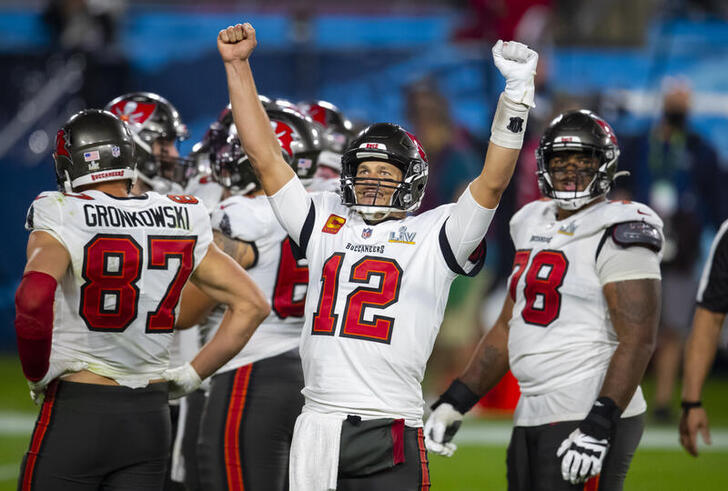 Win some, lose some. America’s biggest game, the Super Bowl, didn’t benefit all that much from scarcity value. The matchup on Sunday, which featured the Tampa Bay Buccaneers versus the Kansas City Chiefs, was mainly a competition between two popular quarterbacks, Tom Brady and Patrick Mahomes. In a somewhat unusual circumstance, too, the game – whose venue is chosen long in advance and is meant to be neutral – had a home team advantage. The championship game was held in Tampa Bay.

That should have suggested a feeding frenzy, especially because the stadium had limited seating. Roughly half the stands were filled with cardboard cutouts, to encourage social distancing, where people could pay $100 a piece to have their mug featured on about 30,000 mannequins. That brought in about $3 million. And if the secondary market is any guide, prices fell, according to the most recent data from TicketiQ. The average listing price was $8,161 versus $8,404 in 2020. While the home team took the title, the Covid-related knockdown on ticket sales and constrained capacity suggest they took a bath, relative to last year, on stadium profit. That may have taken some of the sting for those rooting for the Kansas City Chiefs. (By Jennifer Saba)

Poison pill. Shareholder-rights plans are pitched as a tool to ensure unfriendly buyers can’t acquire a company on the cheap. But they often entrench management and kill offers. Tech company Cubic, however, shows they have their place if the dose is limited. It has wrung a 58% premium in a $2.2 billion sale to Elliott Management and Veritas Capital.

The company said in September that Elliott had taken a 15% stake and, with its private equity partner, was making an offer for the firm. Cubic announced a poison pill, for one year, allowing investors taking stakes above this threshold to be diluted. This potentially gave Cubic more time and leverage in negotiations with a historically aggressive activist, large shareholder and bidder.

The pill also helped box the issuer into selling. The announcement sent the stock up and brought in new investors banking on a deal. In this case, though, the result wasn’t poison, but a healthy premium. (By Robert Cyran)

Custo Brasil. Unusually steep operational costs in South America’s largest country are often likened to a “Brazil tax”. For credit data company Experian, this might include customers’ details being sold online, according to local media reports. On Monday, shares in $33 billion Experian edged down after it said it had found no evidence it had been targeted in a hack which leaked data pertaining to 200 million people – yet.

That’s just as well because Brazil is important to boss Brian Cassin, where a third of the adult population have enrolled for his free credit-checks. The country eases dependency on North America, nearly two-thirds of sales, and offers higher future growth: consumer credit to GDP stands at 30%, according to the company, compared to an emerging market average of 43%. It’s also a reason why Experian trades at 25 times next year’s operating profit, ahead of U.S. listed rivals Equifax – subject of a massive hack in 2017 – and TransUnion on 22 and 23 times respectively, according to Refinitiv data. A big Brazilian cost in the form of a cyberattack would shrink that premium. (By Christopher Thompson)

French farce. So much for hopes of an amicable solution to Veolia’s proposed takeover of Gallic waste-to-water competitor Suez. On Sunday Veolia Chief Executive Antoine Frérot ditched amity to launch a hostile 18 euros per share offer for the 70% of Suez the company doesn’t own, valuing its target at 21 billion euros including debt. That earned him a spanking from rival boss Bertrand Camus, who described Veolia’s proposal as “illegal”, and French finance minister Bruno Le Maire who urged a return to friendly talks.

Suez investors should benefit from the antagonism: infrastructure fund Ardian and New York-based Global Infrastructure Partners are preparing a counter-offer. If pushed, Veolia could pay around 21 euros per share and still make a return in line with its estimated cost of capital of 6.4%, according to a Breakingviews calculation which assumes 500 million euros in cost savings and a 28% tax rate. For Suez shareholders, friendship is over-rated. (By Christopher Thompson)

Fifth time lucky? Vocus is back online with yet another deal opportunity. Macquarie’s infrastructure arm has provisionally offered A$3.4 billion ($2.6 billion) to buy the Australian fibre broadband network owner. It is the fifth suitor to come calling in recent years. Back in 2019, both AGL Energy and Swedish buyout shop EQT Infrastructure abandoned their bids.

Macquarie’s A$5.50-a-share approach, at a 26% premium to its last close, exceeds those of previous entreaties and values the Vocus enterprise at some 12 times expected EBITDA for the year ending in June, according to Breakingviews calculations. That’s a premium to local rivals Telstra and TPG Telecom.

Battle-scarred investors are hesitant: Vocus shares rallied to barely A$5. For Vocus boss Kevin Russell, striking a sale at last would be a welcome outcome. Losing another M&A connection, however, could be the end of the line for the chief executive who has spent nearly three years trying to clean up a jumbled mess of acquisitions. (By Jeffrey Goldfarb)