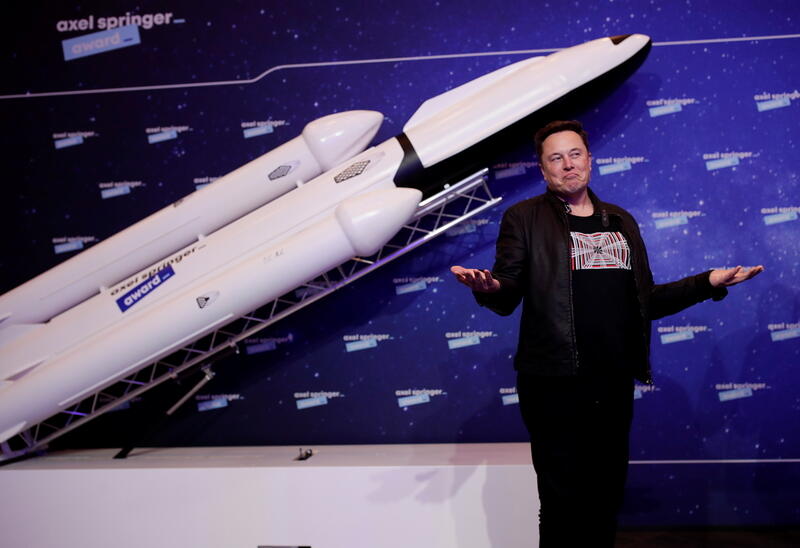 Call my agent. Endeavor, the Hollywood talent agency turned sports-and-entertainment combo, on Wednesday rebooted its initial public offering, abandoned in 2019. It also named Elon Musk as a board director. He has turned electric-car maker Tesla TSLA.O into a $640 billion colossus as well as creating SpaceX, a rocket-launch outfit with ambitions to go to Mars.

For all the glitz of superagent Ari Emanuel’s Endeavor, home to Miss Universe and UFC among others, the group could use Musk’s corporate stardust. Last year’s $3.5 billion Covid-hit top line was nearly a quarter down on 2019 and the company lost $655 million. Having failed once, the IPO is starting from behind, and a head-spinning five classes of stock adds more complexity, not less, to what Emanuel tried before.

But Musk comes with a darker side. One of two paragraphs about him in Endeavor’s draft prospectus lays out his run-in with the Securities and Exchange Commission in 2018 after he tweeted about a possible offer for Tesla. To get the best out of him, Emanuel will need the skills learned from managing the stars. (By Richard Beales)

Over, under. Do athletes or hedge fund managers know more about buying sports teams? The baseball business might find out. Basketball legend LeBron James is taking a stake of undisclosed size in Fenway Sports Group, owner of the Boston Red Sox, alongside RedBird Capital Partners. The $7.4 billion valuation that puts on the team, roughly 3 times what hedgie Steve Cohen paid for the Mets, seems rich. But James has a leg up.

Fenway Sports owns other assets, like Liverpool FC, and Redbird bought French soccer team Toulouse FC last year. So the two could have back-office overlap. The Red Sox are also worth $3.3 billion now, according to Forbes, 50% more than Cohen paid for the Mets.

That could mean the chairman of Point 72 found a good deal. But a key part of owning a ball club, as James knows, is recruiting players at a bargain. Cohen just paid $341 million to extend shortstop Francisco Lindor’s 10-year contract, almost twice as much as any prior Mets package. James’ salary shooting hoops for the Los Angeles Lakers is higher, annually, so he of all people should know that buying into a team is only the first test of a good sports investor. (By Lauren Silva Laughlin)

Digging deeper is a Brookfield speciality. It similarly raised bids for GGP, Rouse Properties, Brookfield Office Properties and Canada Office Properties. This bump is bigger than usual, partly because Brookfield’s own shares have risen in the meantime. That’s despite the fact the group holds around 60% of BPP already. At Rouse and GGP it didn’t even have a majority stake.

BPP’s eight independent directors no doubt helped keep Brookfield boss Bruce Flatt honest. They had assistance from Lazard, which opined that their company was worth up to 12% more than Brookfield’s first offer. More importantly, Brookfield’s sprawling business model, which runs from shopping malls to railways, hinges on bringing in outside investors to share risk. A reputation for sharp treatment would not be an asset. (By John Foley)

Real deal. Compass, the SoftBank-backed real-estate group, raised $450 million in its initial public offering on Wednesday. At $18 a share, the low end of a price range that was earlier slashed from as much as $26, the company is worth around $9 billion allowing for dilution from restricted stock and options.

The company emphasized technology as a selling point. Investors may have seen it more as a real-estate brokerage. At the IPO price Compass, founded by ex-Goldman Sachs executive Robert Reffkin, is worth around 2.4 times last year’s sales of $3.7 billion. That’s more than traditional rival Realogy, which is valued at roughly 1 times sales, but far less than tech-based Zillow at around 9 times revenue.

The IPO price cut may also partly reflect jitters surrounding the implosion of Archegos Capital Management and UK-based Deliveroo’s flop in its London debut on Wednesday. Still, Compass is worth more than its last private funding round in 2019. As any good realtor would advise, if a realistic offer beats the price last time a property was sold, take it. (By Jennifer Saba)

Chocks away. Rolls-Royce’s chief executive chose a good moment to double down on the struggling aero-engine maker. Over the next three years, Warren East will receive 30% of his base pay in shares, according to the 8 billion pound firm’s annual report released on Thursday. That ties his personal fortunes more closely to those of his employer. Happily for East, his declaration of faith coincided with another vote of confidence from Exor Chairman John Elkann.

In his annual letter to shareholders, the Agnelli family scion revealed that over the course of 2020 the investment vehicle had taken a stake in Rolls, whose market value plunged to nearly 3 billion pounds in October as it sought 2 billion pounds from shareholders. Elkann praised East’s “decisive” crisis management and said that Rolls was well placed for recovery as airlines get back in the sky and the engineer’s maintenance revenue returns. So far, their faith is paying off – Rolls’ shares rose 4%. (By Ed Cropley)

Parisian chic. Staying fashionable costs money. So says spendthrift Vinci. Shares in the 52 billion euro French industrial group rose 3% on Thursday after it agreed to pay 4.9 billion euros in cash to expand its share of en vogue renewables by buying part of Spain’s ACS. True, it looks like the company headed by Xavier Huillard negotiated a modest discount from the original price. But a lack of cost savings means Huillard will have to grow his operating profit briskly to make it work.

The deal gives the ACS division an enterprise value of 4.2 billion euros, once 700 million euros of net cash is deducted. Assume Huillard can increase the unit’s 375 million euros it made in annual operating profit between 2018 and 2020 by 10% over the next few years. Taxed at 30%, that implies the purchase could add 289 million euros to Huillard’s bottom line, broadly in line with Vinci’s estimated 7% cost of capital. He will need a strong tailwind. (By Christopher Thompson)

Fine print. China is sabotaging some international credit cooperation, but not in the way typically feared. An analysis of 100 of the country’s loans to poor countries over the last two decades by U.S. research outfit AidData undermines arguments that Beijing ensnares them in so-called debt traps: It neither charged predatory rates nor demanded strategic assets like ports as collateral. And although the sample used reflects less than 5% of an estimated $900 billion of credit China has extended to developing countries, the contractual fine print reinforces fears about China.

In addition to overly broad confidentiality clauses, 75% of loans scrutinised were excluded from restructuring deals with the Paris Club group of developed-economy lenders. China Development Bank often demands that if borrowers take action deemed adverse to any Chinese entity, it triggers a default. For wealthy nations seeking to arrange debt relief, the AidData findings ultimately raise as many trust issues as they resolve. (By Pete Sweeney)

Tiering up. Regulators have finally come knocking on Macquarie’s door. The Australian Prudential Regulation Authority on Thursday dinged the A$55 billion ($42 billion) bank for its inability to properly report liquidity and intra-company funding.

The punishment isn’t exactly harsh for what the watchdog described as “disappointing and unacceptable” failings. As it has done with others, ARPA is forcing the financial conglomerate run by Shemara Wikramanayake to increase capital and risk-weighted assets by some 4% and 7%, respectively. There are no caps on day-to-day business, however, which has held up well  in recent months.

It’s more of a public shaming than anything else, even with ARPA vowing to take tougher steps if Macquarie doesn’t clean up its act. The lack of movement in the shares suggests investors may be giving the bank too much benefit of the doubt. Macquarie avoided the many missteps of domestic rivals and says it’s beefing up its practices, but it also just flunked risk management 101. (By Antony Currie)

Money on the move. Africa’s mobile money revolution is attracting a big hitter. Global payments giant Mastercard on Thursday announced it’s investing $100 million into Airtel Africa’s cash-transfer unit, which lets users zap each other money via basic mobile phone handsets. The deal values the division, which operates in 14 countries, at $2.65 billion, over a third of its parent’s total enterprise value.

The valuation of 12 times the unit’s expected EBITDA this year, compared with the 4 times multiple at which its parent trades, may prompt other African telecommunications operators to go digging for value in their mobile money coffers. By the same yardstick M-Pesa, the pioneering mobile payments offering owned by $13 billion Kenyan operator Safaricom, would be worth $4 billion, assuming revenue of $660 million this year and an EBITDA margin similar to Airtel’s 49%. With the continent’s mobile phone markets increasingly saturated, operators see sense in jumping on the payments revolution rumbling round the globe. (By Ed Cropley)

Priming the stomach. When it comes to merger fees, 2021 is shaping up to be the banker equivalent of Nathan’s Famous Hot Dog Eating Contest. Global deal volume hit a record in the first quarter, nearly doubling year-on-year to about $1.3 trillion, according to Refinitiv. The total was the second largest since records began in 1980. Bankers are just getting warmed up.

Among the highlights, General Electric said it would merge its aircraft leasing unit with Ireland’s AerCap in a $34 billion transaction. Insurance company Chubb offered $23 billion for Hartford Financial Services. And special-purpose acquisition companies, essentially pots of cash, featured heavily, like BowX Acquisition’s deal to buy WeWork, valuing it at $9 billion.

Dealmaking shows no sign of slowing, and the next three months will surely blow away 2020’s abysmal second quarter. Still, some combinations push regulatory limits. Two North American railways announced a $25 billion deal, and Canadian mobile-phone rivals plan to merge. Watchdogs could make bankers choke on some of their proposals. (By Lauren Silva Laughlin)