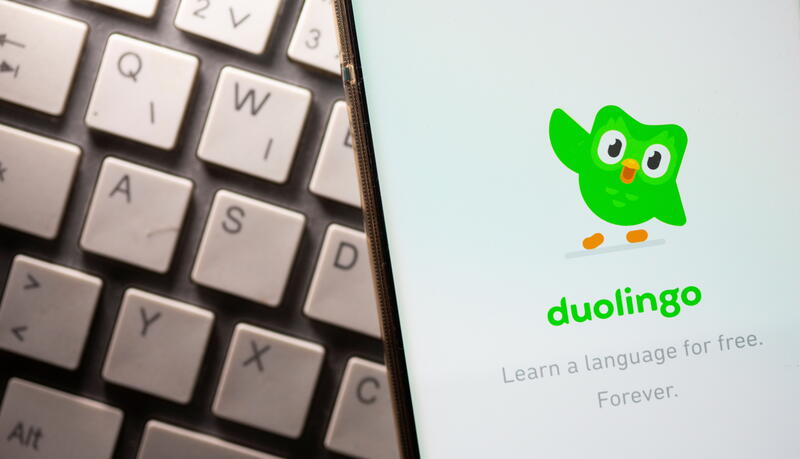 ¿Cómo se dice “overvalued”? Language learning app Duolingo has ratcheted up the price on its initial public offering to as much as $100 a share, an 18% lift from the low point of its previous range. The company, which more than doubled sales last year, could now be worth as much as $3.6 billion not including stock options, a 50% jump from its last fundraising in November. That’s crazier than it sounds.

The S&P 500 Index has risen about a quarter since Duolingo last raised cash, though some tech-like firms that benefitted from lockdowns haven’t done as well. Online meeting platform Zoom Video Communications’ valuation has fallen since last fall while food delivery firm DoorDash’s stock is at its IPO price from December.

Some habits have stuck around, and the simplicity of learning a language with the swipe of a finger might, too. Even so, Duolingo is targeting an enterprise value equivalent to more than 20 times last year’s sales, nearly quadruple the multiple of music app Spotify Technology. Expenses – and losses – are moving in the right direction. But like many language learners, the company might be overestimating its potential. (By Lauren Silva Laughlin)

Dog or unicorn? A cursory glance at any city park confirms that the last year has created millions of new dog owners. Now Japanese investment giant SoftBank has a new pet of its own: canine DNA test-in-a-box maker Embark, into which it just plowed $75 million at a $700 million valuation.

Embark’s goal is to extend dog life spans by three years, something that will tug at the heartstrings and wallets of pet owners. Pet sitter network Rover reckons U.S. petcare spending is a $95 billion opportunity. Even SoftBank founder Masayoshi Son’s dog is among the company’s canine subjects.

But can it prolong the puppyish youthfulness of the petcare market? SoftBank may be arriving a little late. Petcare retailer Chewy’s shares tripled last year but are flat in 2021 so far. Meanwhile, shares in the blank-check firm that acquired human DNA collector 23andMe are down one-third since mid-June. Owning a dog requires love and patience but also plenty of discipline. (By John Foley)

No sweat. Mediobanca is hoping to manage more wealthy Italians’ money. The Milanese investment bank, whose biggest shareholders include tycoons Leonardo Del Vecchio and Francesco Gaetano Caltagirone, is a frontrunner to acquire Deutsche Bank’s network of financial advisers in Italy, La Repubblica reported on Saturday. The business serves customers with some 17 billion euros of assets and makes about 25 million euros a year in net profit. At a mooted price of between 300 million euros and 350 million euros, Mediobanca’s offer would value it at around 13 times earnings. That’s about where 4 billion euro wealth manager Banca Generali trades, and is well below the valuation of 9 billion euro Fineco.

A deal would fit Chief Executive Alberto Nagel’s ambition of bulking up Mediobanca’s wealth management division. Taking over Deutsche’s clients would boost the group’s assets under management by nearly 40% without denting its capital base. Yet it would still leave Nagel some way short of his ambitions. He’ll need to grab more fruit. (By Lisa Jucca)

Bruise cruise. General Motors’ latest journey in autonomous driving has taken it to the courthouse. Late on Friday, the $80 billion carmaker filed a suit accusing Ford Motor of trademark infringement after the latter renamed its new driver-assist technology BlueCruise. The problem? GM has a similar system, in operation since 2017, dubbed Super Cruise, while its $30 billion self-driving division is called GM Cruise.

The word has, of course, formed part of a generic industry term synonymous for decades with the beginnings of autonomous driving – “cruise control”. Granted, Super Cruise, and Ford’s new features, go beyond just speed control, allowing cars to maintain and change lanes and speed. But with GM’s own branding harking back to the earlier moniker, exclusivity may be hard to attain.

Whatever the judge decides, though, GM’s case is giving more publicity to its rival’s attempts to play self-driving catch-up. That’s of more value to Ford boss Jim Farley than a name. (By Antony Currie)

Rude awakening. Koninklijke Philips’ Chief Executive Frans van Houten is trying to soothe anxious investors. On Monday the Dutch medical technology group announced a plan to spend a pacifying 1.5 billion euros buying back its own shares – equivalent to some 4% of outstanding stock. The 37 billion euro group’s splurge was partly justified by a post-pandemic boom in elective surgeries, which led to strong demand for diagnostic imaging equipment in the second quarter. But its decision to take a 250 million euro provision for recalling awry breathing-aid devices for troubled sleepers is keeping shareholders awake.

Philips has now set aside 500 million euros for the machines, but the threat of litigation in the United States is giving investors nightmares. The company’s market value has fallen by roughly 10 billion euros since Philips disclosed the issue in late April. That’s more than 10 times the unit’s entire annual sales of 600 million euros to 700 million euros. Even so, a further 2% drop in Philips shares on Monday morning suggests van Houten faces more restless nights. (By Christopher Thompson)

Smartphone with displayed Duolingo app is placed on the keyboard in this illustration taken, June 29, 2021.