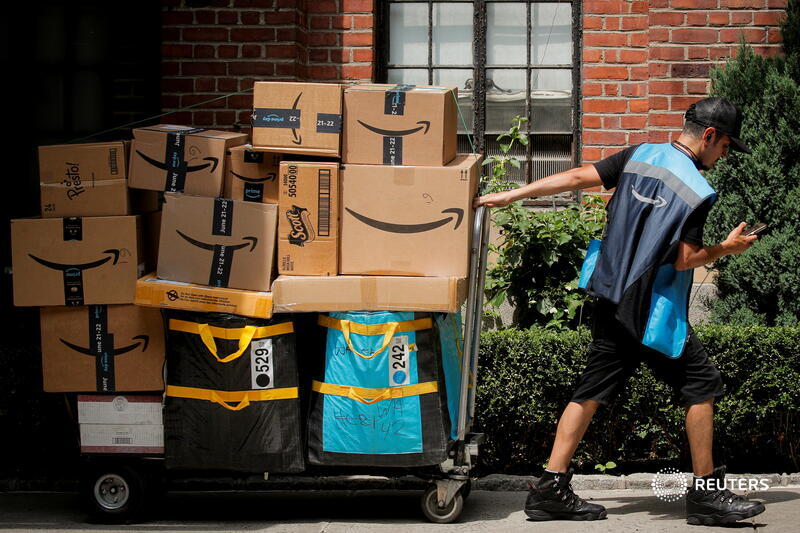 Not so transient. Amazon.com’s wage hike may be an early warning signal for the Federal Reserve. Bumping up average starting wages to more than $18 an hour, $3 an hour higher than base pay, would be great news for warehouse and transportation workers. But these are just the sort of developments that could make higher inflation more entrenched than is currently anticipated.

A shortage of workers during the pandemic has already forced the e-commerce giant to up its pay game. It was offering twice the U.S. minimum wage, which helped the company almost double its staff over the last year. On Tuesday, it said it would hire an additional 125,000 employees and offer $3,000 bonuses in some locations. Earlier this month, Walmart, the largest private U.S. employer, said it would raise pay by at least $1 an hour.

Given there currently are more vacancies than unemployed people, workers have every incentive to try to ensure their pay doesn’t fall too far behind inflation, which was at 5.3% in August, data showed on Tuesday. The more this happens, the more complicated the Fed’s job will become. (By Gina Chon)

Targeted delivery. Southeast Asia’s pandemic reality may be finally catching up to Grab. The company, whose merger with a blank-cheque company is expected to close in the fourth quarter, pared back its full-year forecasts, with adjusted net sales now expected to be $2.1 billion to $2.2 billion, down from the $2.3 billion projected in April. It also cut its gross merchandise value projections. Management warned of lockdown extensions in the countries where Grab operates, as well as Covid-19-induced curbs on movement.

The dampened outlook belies some areas of strength. Second-quarter adjusted net sales rose 92% year-on-year overall to $550 million, with deliveries up 68%. Grab is also gaining traction with its registered GrabFood merchants, which more than doubled, and GrabPay merchants, which nearly tripled. But vaccination rates across the region are still low. Investors will be hoping that Grab’s new initiatives can offset the increasing pain of an unpredictable year. (By Sharon Lam)

Buched build. German landlord Vonovia’s 19 billion euro bid for rival Deutsche Wohnen is looking like a botched job. Having already once extended the deal, Vonovia Chief Executive Rolf Buch now says he will go ahead with his 53 euros per share offer even if he secures less than 50% of the target’s stock. So far, Buch has snagged just over 40% support, despite sweetening the initial 52 euros a share bid.

Vonovia had already signalled it would proceed if it doesn’t get enough shares to delist Deutsche Wohnen. Now, if it ends up with less than 50% of the shares, it could be harder to control the company. Buch has repeated threats that Vonovia might in the future force Deutsche Wohnen to cancel its dividends, in order to boost investment and cajole the target’s shareholders to sell. But that could be harder with less than a 50% stake. Like a rickety building, this deal will need plenty of patching up. (By Aimee Donnellan)

Coffee break. De Longhi Industrial’s owners may be calling the top of the coffee machine boom. The 5 billion euro company’s founders’ vehicle, which owns a 56.5% stake, and Chairman Giuseppe De’Longhi, between them sold 4% of its shares through an accelerated book building on Tuesday. At 35.38 euros a share, the sale is about 9% below Monday’s close and more than 10% below an all-time peak of around 40 euros reached in June.

De Longhi has had a good pandemic. A jump in hot brews consumption during lockdowns lifted sales for its coffee division, which represents about 50% of sales. Personal kitchen appliances brands Kenwood and Ariete also did well as people spent more time cooking at home. That’s why De Longhi’s shares doubled in value in the pandemic and revenue is expected to grow 32% this year. Kitchen goods are however not frequent buys. And as people return to the office, there won’t be much time for domestic coffee-drinking: sales may grow just 4% a year through 2023, Refinitiv data show. It’s a good time to take a break. (By Lisa Jucca)