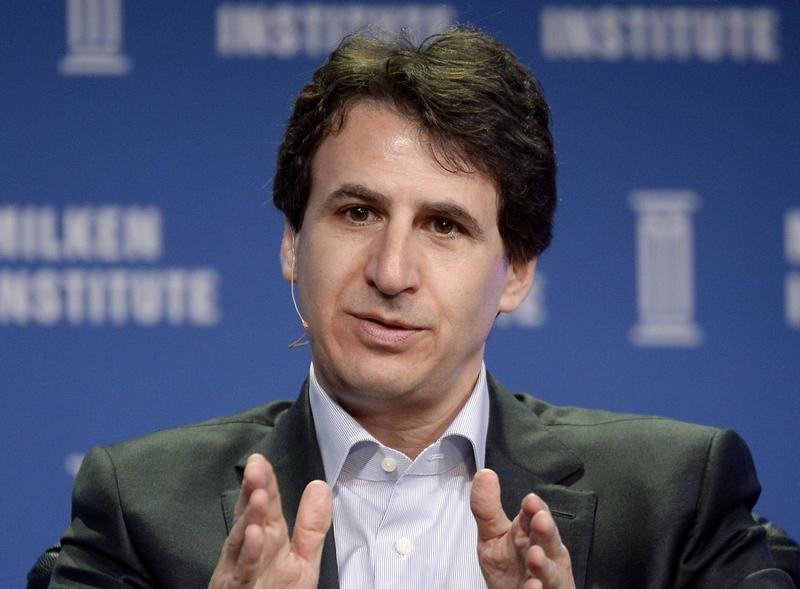 Three become one. Apollo Global Management started with three founders more than 30 years ago, and Marc Rowan is the last man standing. Apollo said on Thursday that Josh Harris was stepping down from his day-to-day role at the firm. Leon Black, formerly the financial firm’s figurehead, already said earlier this year he would relinquish his titles earlier than expected amid revelations of his relationship with convicted sex offender Jeffrey Epstein.

It makes sense to give Rowan a clear runway as Apollo goes through big changes. It named former Securities and Exchange Commission head Jay Clayton as chairman and bought Athene, the insurance firm Rowan helped construct. Once a private equity firm, Apollo increasingly looks like a spin on Warren Buffett’s Berkshire Hathaway. Assets under management grew almost 50% in the past year to $461 billion.

Rowan won’t have an entirely free hand. Black remains a large shareholder, and Harris will stay on Apollo’s board and executive committee. Even so, the whittling down from three to one means accountability for Apollo’s next phase sits with one person, whether he likes it or not. (By Lauren Silva Laughlin)

Explorer joins Clippy. Microsoft is finally sending Internet Explorer to the graveyard. It’s an ignoble end for the web browser that figured prominently in the software giant’s epic battle against the U.S. Department of Justice two decades ago. Microsoft ultimately won. But the tussle took its toll. It’s a reminder that victory over watchdogs has a price.

The DOJ came after Microsoft for trying to crush competitor Netscape by tying its Windows operating system to Internet Explorer. Netscape hooked up with AOL but was eventually put out of its misery too. After Microsoft agreed to concessions giving consumers choice, IE’s dominance faded and so did the company’s market share. Its newer browser, Microsoft Edge, is still in the minor leagues.

Silicon Valley titans should take heed. Regulators are circling Alphabet and Facebook while Apple is duking it out in court against “Fortnite” creator Epic Games. They may ultimately prevail in Washington and elsewhere, but over time consumers will render their own verdict. (By Jennifer Saba)

As at JPMorgan, which also announced a rejig this week, it’s also no clearer who’s going to run things at Morgan Stanley when the current leader steps aside. Pick, Saperstein, Simkowitz and Pruzan are all ferrets in a sack, as the metaphor has it. Gorman is presumably in no rush to leave: Morgan Stanley’s board awarded him $33 million in 2020.

A third trend at rival firms – building a top team that looks more like the wider population – seems less of a priority for Gorman. True, Sharon Yeshaya will be Morgan Stanley’s second female CFO. But when Citigroup now has a female chief executive and JPMorgan is signaling that likelihood after Jamie Dimon, Morgan Stanley’s line-up looks new rather than different. (By John Foley)

Setting the eXXample. Even small steps forward are good news. Boards of companies in the Russell 3000 Index are almost half way to gender parity, according to Equilar on Thursday. The consultancy’s gender diversity index stood at 0.49 at the end of March, where 1.0 represents equal representation by women and men. That’s a couple of notches better than in December. Nearly a quarter of board seats are now held by women, up from 15% at the end of 2016.

U.S. stakeholder and legislative pressure is working, if only gradually. For the first time, the proportion of companies with no women serving as directors fell below 5%. California, home to the most companies in the survey, had only one of 489 boards without female representation. The state counted 86 Russell 3000 boards with no X chromosomal pairs in 2018 when it introduced a law requiring women on boards. Mandatory quotas remain controversial but provide impetus for change. Maybe soon, more companies will tip the scales with a majority of women, like General Motors. (By Richard Beales)

Tracking progress. Britain’s experiment with privatised railways has come almost full circle. Nearly three decades after handing control to private operators, the government said on Thursday that it was assuming responsibility for most rail services. The private sector gets a slimmed-down role overseeing short-term contracts. The shakeup follows the state’s temporary nationalisation of rail franchises during the pandemic.

Take South Western, London’s biggest commuter network. In 2019 it made 1.1 billion pounds of revenue, mostly from ticket sales, which went towards leasing trains, paying staff and other costs. Now most of its old responsibilities sit with the state, and South Western’s private operators get a maximum 19 million pound annual fee for selling tickets and cleaning trains.

The move looks like an admission that privatising public monopolies was a mistake, and highlights the Conservative government’s growing tendency to meddle in the economy, for example by buying a stake in satellite operator OneWeb. Investors in other privatised assets, such as water companies, have been warned. (By Ed Cropley)

Hospital pass. Inter Milan’s on-pitch success has apparently not yet done much for its value. The Italian soccer team, who recently became domestic champions for the first time in 11 years, is close to securing a 275 million euro investment from Oaktree Capital, which will provide a loan to the holding company through which Chinese electronics retailer Suning controls the club, in return for a 31% equity stake from current shareholder LionRock Capital.

That could value the club’s equity at around 887 million euros, a substantial drop from the over 1 billion euro valuation that majority owner Suning sought in negotiations with private equity firm BC Partners earlier this year. However, a mooted bumper league TV deal has gone nowhere. And empty stadia – matchdays accounted for a fifth of Inter’s revenue last year, according to Deloitte – combined with high salaries for players like Belgium’s Romelu Lukaku still weigh on the bottom line. Having a new deep-pocketed backer may at least help the Nerazzurri avoid nasty incoming tackles. (By Christopher Thompson)

Fly in the ointment. Qantas is charting a smoother course. The Australian carrier said on Thursday it would slash additional costs, including by freezing wages for two years and paying travel agents lower front-end commissions. It also flagged that its net debt had peaked at A$6.4 billion ($5 billion) and that it was on track to reach 95% of domestic capacity in the quarter ending June 30. That positions it for one of the industry’s better rebounds and contrasts starkly with struggling Singapore Airlines, which has no domestic market and just reported a record $3.2 billion annual loss.

Even so, Qantas boss Alan Joyce is itchy to fly overseas. He prodded government officials to improve the vaccine rollout or risk “being left behind” as other countries get back to normal. As it stands, Canberra intends to keep borders closed until mid-2022. Qantas, however, only pushed back expectations for a “significant level” of international flying from end-October to late December. Expect another delay. (By Jeffrey Goldfarb)

On the sauce. Curbing binge drinking could be back on the agenda for richer countries. A report from the Organisation for Economic Co-operation and Development published on Wednesday found that around 44% of people across 11 major economies drank more often following the first wave of Covid-19, compared to just around a quarter of people who said they drank less often. The organisation reckons cheap alcohol is a major driver of consumption.

That makes the “premiumisation” strategy of drinks companies like Diageo and Pernod Ricard extra sound. Not only are posh tipples like Johnnie Walker whiskey or Lillet aperitif immune to the impact of governments setting minimum pricing, the distillers have environmental, social and governance goals to curb excessive drinking. Markets appear to approve – both are on a higher rating than before the pandemic. Pernod is now trading at 31 times earnings, according to Refinitiv, compared to around 25 times pre-Covid. As bars reopen, their valuations should remain vivacious. (By Dasha Afanasieva)