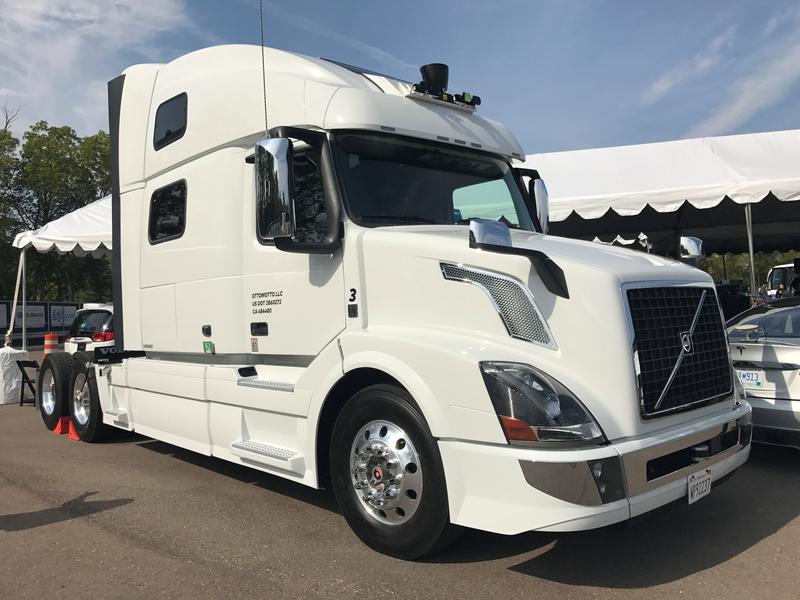 Too simple. Lately, every startup with an eye on the automotive future seems to have sold itself to a blank-check company. TuSimple, an autonomous trucking startup, is on a different road: It filed on Wednesday to raise around $1 billion in an old-school initial public offering. The indicative price range would value the company, with almost no revenue, at a whopping $8 billion.

Nikola, an electric-truck wannabe, boasts a valuation of $5 billion. It went public via a special-purpose acquisition company, and at one point last year it was worth five times as much. The listing process for TuSimple could be a more rigorous test. Unlike Nikola, TuSimple has to run the gauntlet of an investor roadshow.

SPACs can publicly lay out alluring projections for early-stage companies, something a traditional IPO process doesn’t allow. Electric-car upstart Lucid Motors, set to merge with another SPAC, springs to mind. Maybe TuSimple wants to give itself a sterner test. Or maybe its focus on autonomous driving for fossil-fuel powered trucks, rather than trendy electric ones, forced it in that direction. (By Lauren Silva Laughlin)

Common cents. Naspers is suffering from the ultimate first-world problem. The South African internet investor’s Amsterdam-listed subsidiary Prosus on Wednesday announced it’s selling 2% of Tencent, trimming its holding in the Chinese internet giant to 29%. The sale further cashes in one of the world’s best-ever investments. Naspers Chairman Koos Bekker spent just $36 million on one-third of the fledgling Tencent in 2001; on Wednesday the stake was worth around $240 billion. Assuming buyers demand the same 8% discount as they did when Naspers last sold shares three years ago, Prosus will pocket around $14.2 billion.

The move will disappoint investors hoping for more radical action, though. Naspers, which is worth around $108 billion, has long traded at a big discount to the implied value of its stakes in Tencent and other internet stocks. Despite a $5 billion share buyback last year, CEO Bob van Dijk has struggled to close the gap. Selling another slice of Tencent may only highlight the problem. (By Peter Thal Larsen)

Prick up your ears. Clubhouse is capitalizing on its VIP status in Silicon Valley. The year-old audio-based social-media site may raise cash at a valuation of $4 billion, according to Bloomberg. That’s up 300% from its last fundraising round in January. The Andreessen Horowitz-backed app hosts conversations in various online “rooms.” Tesla boss Elon Musk dropped in for a surprise chat in January. Participation is by invitation only, though Clubhouse plans to open up. It has become so popular that Facebook, Twitter, LinkedIn, Spotify Technology and ByteDance are rolling out similar features.

In a way, it’s a twist on podcasting. The $54 billion Spotify, which bought podcast specialist Gimlet Media in 2019, has 345 million monthly users. At the same $156 per head, Clubhouse’s 10 million weekly users could be worth $1.6 billion. Alternatively, at Twitter’s value-per-daily-user figure of around $280, Clubhouse could be nearly twice as valuable.

Fast growth helps, but it’s unclear how Clubhouse will make money or fend off deep-pocketed copycats. Once anyone can join, the novelty value could wear off. (By Jennifer Saba)

Road twist. The Benettons’ Italian road ordeal has presented a last-minute twist. Spanish businessman Florentino Perez said on Tuesday that his infrastructure group ACS may bid for troubled Italian motorway operator Autostrade per l’Italia (ASPI), currently controlled by the Italian dynasty through $15 billion Atlantia. Perez is coming a tad late to the ASPI party. Italian government investor Cassa Depositi e Prestiti has already made a cash offer for Atlantia’s 88% stake in ASPI that values the motorway group’s equity at 9.1 billion euros, with Blackstone and Macquarie.

To beat CDP, ACS would need to offer a higher price for ASPI. Yet the current bidders are already facing a mediocre 9% internal rate of return, according to a Breakingviews calculation. Also, ACS and Atlantia jointly control Spanish road operator Abertis. If the bid were made through that group, the Benettons would retain an interest. That would defy Italian government attempts to pry the asset away from the clan and regain control of the country’s motorways. ACS’s belated entry into the ASPI epic looks too complex to work. (By Lisa Jucca)

Merger of fevers. Friday’s $1 billion acquisition of U.S. musical talent manager Ithaca won’t just unite two of the industry’s biggest phenoms this century under the same roof – Justin Bieber and K-Pop’s BTS. It also will test the limits of how much investors swoon over the fortunes of acquirer HYBE.

Shares in the company formerly known as Big Hit Entertainment are now double last October’s much-hyped initial public offering. And they have jumped some 15% since the merger was unveiled, adding roughly the value of the deal itself to HYBE’s market worth, which now stands at $8.8 billion.

HYBE is growing fast – earnings may more than double this year, per Refinitiv. And the merger will diversify its portfolio with artists from Ariana Grande to Demi Lovato.

But the stock now trades at 53 times estimated 2021 earnings – a significant premium to competitors including YG Entertainment, JYP Entertainment and SM Entertainment. That’s enough to start rattling some eardrums. (By Sharon Lam)

Damp squib. Natixis boss Nicolas Namias will be left ruing what might have been. On Tuesday the $15 billion French bank announced the exit of Jean Raby, who ran its asset management division over the past four years. Since the end of 2017, the French-Canadian ex-Goldmanite helped grow assets under management by a third to an impressive 1.1 trillion euros. Less fondly, Raby presided over a risk meltdown at former star fund H2O, which led to Namias disposing of Natixis’ majority stake in the London-based unit.

But its reduced M&A ambitions may stick in the craw. When Raby joined, the business was seen as a buyer in Europe’s fractured asset management industry. Power-coupling with rivals Amundi or Germany’s DWS, for example, would have created a mini European BlackRock, with AUM rising to some 2.8 trillion euros or 1.9 trillion euros, respectively. Instead, Natixis’ majority owner BPCE is buying the unit, along with the rest of the bank, arguably on the cheap. Raby’s departure is a fitting anticlimax. (By Christopher Thompson)

Nuclear option. EDF’s stop-start restructuring just received an energy boost. France could spend as much as 10 billion euros buying out the 16.3% of the utility it doesn’t already own, Reuters reported late on Tuesday, citing union sources. Given the company’s market value was just 35 billion euros as of Tuesday’s close, that implies the minority shareholders can expect a premium of roughly 75%. The shares promptly jumped 10% on Wednesday morning.

Despite the bump, EDF shares are still around 10% below where they were trading in January. The valuation has jumped around based on ongoing talks between the French government and the European Commission. At issue is what price France can offer EDF for nuclear power from its ageing reactors, and whether EDF will follow the industry craze for listing green assets, which Breakingviews calculates could be worth 18 billion euros. That perhaps explains why Paris is inclined to treat outside investors with such generosity. (By George Hay)