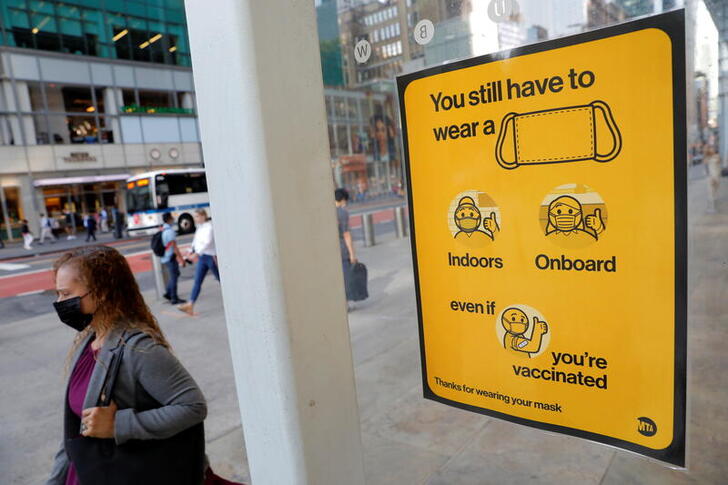 Temperature check. A possible cold is coming onto a healthy U.S. jobs market. Payrolls grew by 943,000 positions and the unemployment rate dropped 0.5 percentage points from June to 5.4% in July, the Labor Department said on Friday. But the Delta variant of Covid-19 is already causing people to cut back on eating at restaurants and travel.

Leisure and hospitality, the hardest hit sector in the pandemic, saw the biggest gains. Hotels, restaurants and the like added 380,000 jobs last month. But those industries are starting to see strains from the more contagious Delta variant.

Reservations at restaurants were down 10% on Wednesday compared with the same period in 2019, according to OpenTable. A week earlier, the drop was 4%. Daily passengers at U.S. airports had a five-day streak of over 2 million, the longest since travel nearly stopped last year, before falling below that level this week, data from the Transportation Security Administration showed. The economy may be in for some more sniffles. (By Gina Chon)

Simmering. The IPO market might be cooling, but Weber and Traeger suggest it’s not frozen. The grill makers’ shares opened more than 20% above their initial public offering price and have climbed since. Both make a tangible product and are growing. And unlike the highly volatile Robinhood Markets, which listed last week, they’re relatively easy to value.

Weber went public on Thursday with shares opening 21% higher than the downsized IPO price of $14. That gave it a market valuation of $5 billion. Traeger went public last week, and shares have since increased two-thirds from its IPO price, giving it a $3.4 billion valuation, above what Breakingviews estimated. Traeger’s enterprise value of more than 3 times estimated sales for this year, versus 2 times at its larger rival, could make sense if investors see it as a luxury product.

While the norm for this year has been new stock issues rising almost 40% on their first day, not all are so lucky. Take Dole, the fruit company whose shares are trading below its IPO price. But if companies with sensible business models can find a stable valuation then the metaphorical plate is still half full. (By Amanda Gomez)

Food for thought. Fortress Investment has thrown down an undersized gauntlet to Clayton, Dubilier & Rice. The SoftBank Group-owned investment firm, Canadian pension fund CPPIB and the real estate arm of Koch Industries on Friday marginally lifted their bid for Britain’s Wm Morrison Supermarkets from 254 pence to 272 pence. CD&R has until Aug. 9 to respond.

It’s not obvious it should. The Fortress group’s raised bid, which follows a fifth of Morrisons shareholders turning their noses up at the previous one, will produce a humdrum 13% internal rate of return five years hence even if it can sell out at the same 9 times EBITDA multiple at which it buys in, Breakingviews calculations suggest. Raising that return might require a tougher approach to Morrisons’ property assets and employee relations than the seller is comfortable with. Still, Morrisons’ 278 pence share price implies CD&R’s interest is not yet in the bargain bin. (By George Hay)

Sour taste. The Chinese food delivery giant is getting a bigger-than-expected fine. The country’s powerful antitrust watchdog plans to dock roughly $1 billion from Meituan for forcing merchants to sell exclusively on its platform, the Wall Street Journal reported on Friday citing unnamed sources. That would come to about 6% of 2020 revenue, higher than the 4% that peer Alibaba had to pay, suggesting Beijing may be even angrier at Chief Executive Wang Xing than Alibaba founder Jack Ma, after Wang posted a poem from the Qing Dynasty era hinting at frustrations with the government.

Meituan’s market value has halved since a February peak to $168 billion. Analysts at China Merchants Securities expected Meituan, also under pressure to hike pay for delivery drivers and provide better labour protections, would fall back into the red this year, logging an adjusted net loss of around $2 billion. And that was before the fine. As bad as this is, the worst may be yet to come. (By Yawen Chen)

Best before. HelloFresh has handed investors another mixed bag. On the one hand, the German meal-kit delivery company grew revenue 60% year-on-year in the second quarter to 1.6 billion euros, a tasty outcome given the easing of lockdowns. On the other, the 13 billion euro firm undercooked its expected EBITDA margin by over 100 basis points, and lowered its guidance from 10%-12% to 8.25%-10.25%. Its shares shed as much as 6% on Friday.

Investment in depots to meet the extra demand explains the erosion of profitability. But retaining customers’ attention will be tough. Takeaway services Uber Eats and Delivery Hero are launching in HelloFresh’s home market. Meanwhile, rapid grocery delivery startups like $7.5 billion Getir, backed by deep-pocketed venture capitalists, are fighting for market share. Traditional supermarkets are also ramping up online offerings. HelloFresh trades at twice 2022 sales, against an average 3.6 times for food delivery players. With lazy consumers having so many options, investor pessimism is understandable. (By Karen Kwok)

Cede capital. A tax loss in India might lead to some gains. New Delhi is proposing to scrap its controversial retrospective application of a law used to slap giant bills on foreign companies over the past decade. The move could end disputes worth some $7 billion.

The retreat follows lost fights against Vodafone and Cairn in international arbitrations. Tensions ratcheted up in July when Cairn seized Indian property in Paris in an effort to start collecting on an award granted by The Hague now worth $1.7 billion. Under the plan, India would drop its claims if companies no longer seek damages. The government also would repay some $1 billion it collected, mostly to Cairn.

If a compromise is agreed, it will help clean up a messy problem that deters investment from overseas. India’s struggling economy could use the help. As rampant official crackdowns cool China’s appeal, it’s a good time for India to be putting its best foot forward. (By Una Galani)

Switch up. Nintendo could use a booster pack. The $68 billion Japanese console-maker said on Thursday that operating profit for its first quarter to the end of June fell 17%, missing estimates. It’s a stark contrast to the stronger performance of rival Sony.

There are signs of customer fatigue: Overall unit sales of the Switch fell 22% to about 4.5 million units, and players purchased fewer games. Excitement is starting to fade around hits like “Animal Crossing: New Horizons”, which slumped from the more than 10 million copies sold in the first quarter of the previous fiscal year.

Nintendo maintained its forecast for a 22% drop in operating profit for this fiscal year. Buying back some 1.5% of its shares is probably too small to meaningfully prop up its flagging valuation of 15 times forward net profit. But the company will need to look beyond games and start extracting more value from its intellectual property to catch up with rivals. (By Sharon Lam)

A poster alerting for the wearing of masks is seen on a 42nd Street subway entrance as cases of the infectious coronavirus Delta variant continue to rise in New York City, New York, U.S., August 2, 2021.