17 May 2021 By Breakingviews columnists 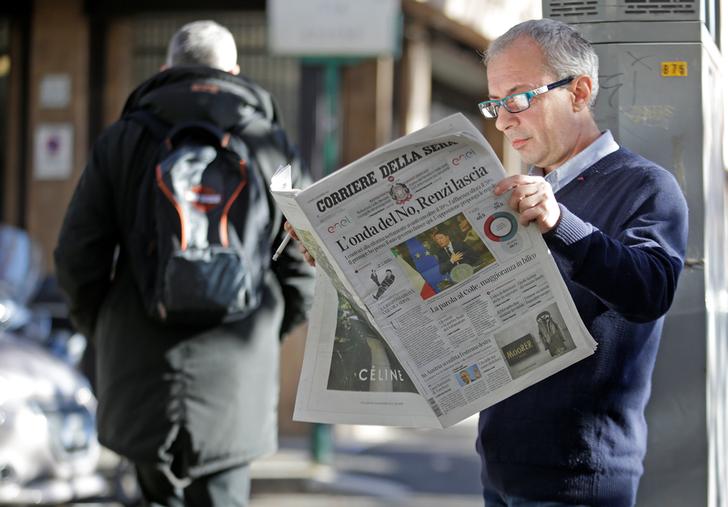 Tolls in both directions. Post-pandemic corporate dealmaking is buoyant. Then there’s the single-handed boost from AT&T, which only in February set about partly offloading DirecTV, which it bought for $67 billion including debt in 2015. Now the telecommunications giant is spinning off the Time Warner assets it bought for $109 billion just three years ago in a deal with Discovery.

This being AT&T there’s always debt involved, and JPMorgan and Bank of America have served up finance and advice in various contexts. Among law firms, AT&T has kept the legal eagles at Sullivan & Cromwell busy on all four transactions. Analysts at Goldman are probably not the only ones burning out. (By Richard Beales)

Failed gamble. Blackstone has gained the upper hand in a vexing Italian property fight. RCS MediaGroup, publisher of Italy’s best-known daily, Corriere della Sera, has accused the U.S. buyout giant of exploiting its financial difficulties to pay a cheap price for the newspaper’s historic Milan headquarters in 2013. The dispute over the 120 million euro deal prevented Blackstone from flipping the building to German insurer Allianz for more than twice the amount. Yet a Milan arbitration court concluded last week that Blackstone’s purchase had been fair and valid.

RCS Chairman Urbano Cairo’s daring legal gamble risks backfiring. Blackstone may now try to resume a U.S. lawsuit in which it seeks 600 million euros in damages. That’s almost 50% more than RCS’s market value before its shares dropped as much as 7% on Monday. All in all, it’s bad news for Corriere’s owner. (By Lisa Jucca)

Plane drain. Boeing is darkening Michael O’Leary’s one summer bright spot. The Ryanair boss had harsh words for the U.S. aviation giant on Monday. The first batch of fuel-efficient 737 MAX jets may not arrive in time for the European high season. The Irishman’s frustration is understandable. With 210 units on order, Ryanair is Europe’s biggest buyer of the short-haul aircraft and, crucially for Boeing, retained its faith even when the MAX was grounded two years ago after two fatal crashes.

The delay could make a marginal dent in Ryanair’s pocket. The MAX boasts 4% more seats than older 737 variants and burns 16% less fuel, which typically accounts for up to a third of an airline’s operating costs. So far, only 16 aircraft are held up, a tiny proportion of Ryanair’s 460-strong fleet. But with pandemic movement curbs still depressing airline sales and profitability, O’Leary needs whatever financial boost he can get. (By Ed Cropley)

Judged against U.S. peer WillScot Mobile Mini’s 12.3 times multiple, however, the price seems more reasonable. The market for flexible “modular” buildings, made from Lego-style blocks which can be swapped around, is growing fast. Adapteo’s new owners could pour far more money into the company than public investors are prepared to do. It’s notable that European rivals are mostly privately owned. The best targets for investors in today’s public markets are arguably the assets that don’t belong there. (By Liam Proud)

Confidence trick. Australia’s Crown Resorts has regained its swagger. The distressed gaming group rebuffed a $6.5 billion bid from Blackstone, arguing the private equity firm fails to account for multiple factors including a potential earnings revival, opening of a new property, and its plans to pay down some A$450 million in debt by the end of next month.

Such self-assurance is somewhat justified. Crown is mulling last week’s rival proposal from The Star Entertainment, a share-based offer which allows the target’s owners to ride any recovery. That includes an option to pay cash for up to one quarter of the stock at A$12.50 per share versus Blackstone’s all-cash offer at A$12.35. Crown shares are trading at more than A$13.

It puts the ball back into Blackstone’s court. The 10% owner was dismissed without being given access to the books, according to a person familiar with the situation, giving it little fresh information to revise its offer. But Monday’s development underscores how Crown is slowly but surely fixing its own problems, including a governance and compliance crisis. (By Katrina Hamlin)

Up in the air. Plans for an initial public offering by Go Airlines offer a cockpit view of Indian aviation misery. The ultra-low-cost carrier is looking to raise $491 million through a Mumbai listing, and a further potential $204 million through a pre-IPO placement of shares. It’s earmarked at least half of the proceeds to trim debt, replace letters of credit and repay unpaid bills to its fuel provider, the $13 billion state-backed Indian Oil. There’s no other good reason to take an airline public at this time.

GoAir carried 16.2 million passengers in the full fiscal year before the pandemic, but only 15% of that figure in the subsequent nine months. If it prices at the same trailing 18 times EBITDA multiple of Interglobe Aviation, the owner of top rival Indigo, GoAir’s enterprise might be worth $841 million based on its pre-pandemic performance in the year to March 2020 – even though its profit margins collapsed that year. Applying the same multiple to the prior year’s performance yields a valuation over $2 billion. Valuing an airline during India’s fresh lockdowns will be a turbulent exercise. (By Una Galani)