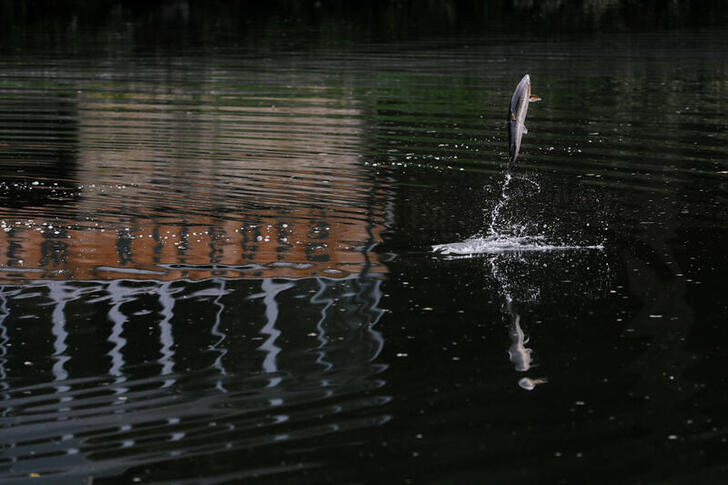 The chunky premiums to undisturbed prices – 54% in the case of Norway Royal and 61% for Huon – is testament to salmon’s resilience. Despite Covid-19 shuttering big customers like restaurants last year, $8 billion SalMar said punters wanting home-cooked delicacies made up the shortfall. Growing concerns about the carbon footprint of beef only add to attractiveness. Like SalMar, rivals Leroy Seafood and Bakkafrost are trading over 10% above pre-coronavirus levels. With Norway Royal shares trading 3% higher than SalMar’s offer, investors are clearly hoping bidders will come back for another bite. (By Oliver Taslic)

Seat of its pants. British underwear purveyor Marks and Spencer is snapping back. On Friday the retailer upgraded its profit outlook after a jump in demand for food. An accompanying surge in online clothing orders suggests its turnaround is finally working. Pent-up demand post the pandemic is a stroke of luck, but M&S may also be reaping the rewards of a management overhaul and efforts to modernise the business. Shares jumped 12%.

That will be a relief to Chief Executive Steve Rowe, who’s no doubt aware that bankers have been trying to flog the 137-year-old outfit to private equity for years. The current battle for Wm Morrison Supermarkets has put British retailers firmly on barbarians’ menus. Friday’s price rise means M&S is trading at 12 times earnings for the year to March 2022. That narrows its discount to Morrison’s 21 times. Delivering more consistent growth will further boost Rowe’s defences. (By Dasha Afanasieva)

Low visibility. Sydney Airport’s buyout defence is struggling to take off. In its first results since rejecting a A$22.8 billion ($16.3 billion) takeover bid led by IFM Investors, the company provided little evidence of how it might deliver the same kind of value. The figures were predictably weak, with first-half EBITDA sliding 30% from a year earlier. It also touted a new luxury shopping enclave fronted by LVMH’s Louis Vuitton and pointed to potential property development to capitalise on the e-commerce boom.

International travel, though, will be slow to recover Down Under. Even when it does, there’s no guarantee Chinese visitors will return to help fill upscale shops. The real estate projects are years away. Meantime, a sweetened A$8.45-a-share proposal is available now. That’s 47% above the undisturbed price, and worth more if Sydney Airport’s equity hike last year is factored into the equation. Holding out for another sweetener might pay off, but there’s a growing risk the suitors take off instead. (By Jeffrey Goldfarb)

Washout. This was supposed to be Mike Henry’s big week. On Tuesday the BHP boss unveiled an overhaul including a $14 billion-odd sale of its oil and gas division to Woodside Petroleum as he tries to focus the miner on cleaner “future-facing commodities” like potash and metals for electric vehicles. Shareholders, though, have nixed some 15% of the company’s market value since the news. Now Chile is dinging BHP for poor water use at a copper mine.

A court has ordered the Melbourne-based company to cease pumping groundwater for its Cerro Colorado operations in the country’s northern desert after years of complaints from indigenous communities. Water issues in the increasingly arid state make mining the red metal costly: BHP has already spent more than $4 billion on a desalination plant at another of its properties, while Barrick Gold had to close a $5 billion project on environmental concerns.

This latest chastisement in Chile marks a poor start to Henry’s push for a cleaner company. (By Antony Currie)