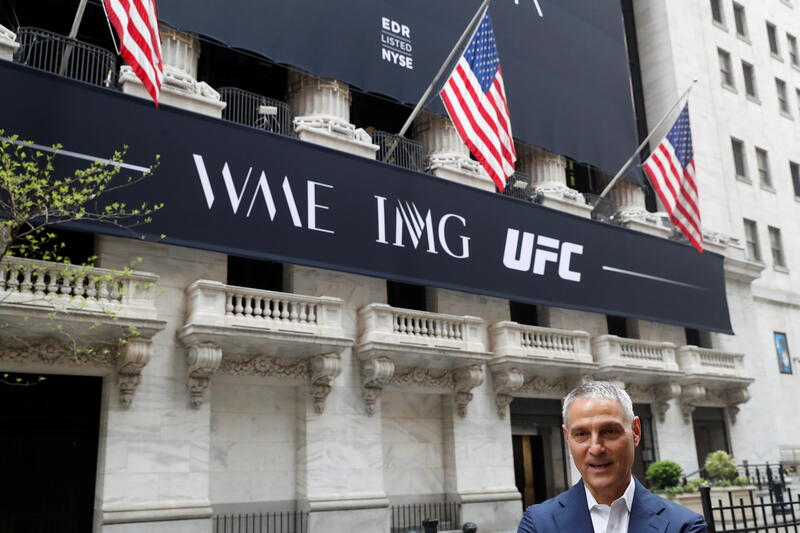 Try, try again. Endeavor delivered a solid performance during its debut as a listed company on Thursday, yet managed to flip the script laid down by other high-profile initial public offerings. It neither left a ton of money on the table nor did its shares fall. The shares were a bit over its IPO price of $24 by Thursday afternoon. It gives Ari Emanuel’s entertainment group and talent agency more scope to go shopping.

Since 2014, Endeavor has completed more than 20 mergers and acquisitions. Part of the rationale for going public – after abruptly scrapping its IPO more than a year ago – was to buy the rest of martial-arts promoter Ultimate Fighting Championship it didn’t own. About half of the $1.8 billion in IPO proceeds will go on tying up that big loose end, which spooked would-be investors back in 2019.

Endeavor is in a stronger place now. Its cash position will have nearly tripled to $2 billion in a year, even after buying out UFC, in time to catch a surge of consumers ready to hit live events. With a market capitalization of nearly $11 billion, Endeavor has added financial flexibility to its repertoire. (By Jennifer Saba)

Turnaround. The U.S. recovery is on fire. The economy grew at an annualized rate of 6.4% in the first quarter of 2021, according to initial government estimates released on Thursday. That beat projections by economists surveyed by Reuters and is the second-fastest pace since the third quarter of 2003.

Economic data keeps improving. Weekly jobless claims have been dropping, and the unemployment rate was at 6% in March, well off its high of nearly 15%. Consumer spending hit a 14-month high in April. President Joe Biden’s $1.8 trillion package, with $1,400 checks to individuals, was key.

This stimulus was about twice the size of what Barack Obama pushed in 2009. And it has contributed to a quick rebound compared to the long slog after the financial crisis. They were different calamities. But it took almost four years after the Great Recession for GDP to recover. This economy is already approaching pre-pandemic levels.

It’s a lesson for the next government in crisis: Go big, or go home. (By Gina Chon)

Art of War. Ares Management is upping the ante in the booming market for private credit. The asset manager that oversees $197 billion has just raised 11 billion euros for a fund that will lend directly to European medium-sized companies. It’s the largest of its kind, with total firepower reaching 15 billion euros including leverage. That’s over half the total Ares has lent in the region since it arrived in 2007.

So-called direct lenders are shrugging off the pandemic. They lend to companies which are too small to access debt markets, while offering larger ones more flexible funding packages and greater certainty. Ares reckons capital rules and losses from Covid-19 will prompt banks to keep shunning medium-sized borrowers. The direct lending sector is growing quickly: private debt managers oversaw $975 billion in September 2020, over twice the level in 2014, Preqin says. And funds are now competing directly with bond markets, where terms are loose. Picking the right borrowers will be more important – and harder – than ever. (By Neil Unmack)

Conglomerate premium. Samsung Electronics is benefiting from diversification. Although corporate sprawl has largely fallen out of favour, the $495 billion company said on Thursday that first-quarter operating profit increased 45% from a year earlier despite a hit to its memory-chip business from disruptions to its Texas factory and falling prices.

The South Korean giant, whose founding Lee family said a day earlier it would pay an over-12 trillion won ($10.8 billion) inheritance tax bill, fell back on mobile phones. The division’s operating profit jumped 66% with the release of the Galaxy S21 handset, and surpassed the chip division’s tally for the first time in nearly five years. Although Samsung had flagged problems in semiconductors and acknowledges that supply shortages could persist, it also expects a second-quarter rebound. That suggests that even if the novelty of its newest device wears off, the balance will shift again and help justify its multi-faceted approach. (By Sharon Lam)

Bounce. Strong first-quarter numbers and an upbeat outlook helped Standard Chartered shares rally more than 3% in early London trading on Thursday. Pre-tax profit of $1.4 billion for the Asia-focused lender was two-fifths above analysts’ forecasts as a sharp drop in impairments offset the hit from still-shrinking interest margins. The bank also predicted revenue growth would return to its target medium-term rate of 5-7% next year.

Meeting that depends a lot on Hong Kong, responsible for a third of StanChart’s business and where it plans to hire 400 people for wealth management. The lure is the city’s inclusion in Beijing’s efforts to better integrate the nearby Greater Bay Area. Progress there depends on Hong Kong’s China border reopening. Yet local carrier Cathay Pacific offered aircrew voluntary redundancy on Wednesday and expects no upturn for a while in its flight schedule, which is China-heavy. StanChart’s optimism may take longer than it expects to come good. (By Jennifer Hughes)

Price promises. Unilever is picking up the pace. The maker of Marmite spread reported a 5.7% underlying year-on-year sales growth in the first quarter to 12.3 billion euros, beating analyst expectations of 3.9%, thanks to cooking at home and growth in China. The added boost has allowed it to return an additional 3 billion euros to shareholders through buybacks, pushing up the shares by 3% on Thursday.

It’s not all good news, though. Chief Executive Alan Jope expects the group’s underlying operating margin to fall in the first half of the year, thanks to higher cost inflation and increased marketing spend. His hope is that the margin will then fully recover and exceed 2020’s 18.5% level. Yet that’s at odds with the longer-term spectre of increasing commodity costs which made rival Procter & Gamble decide to increase some prices in September. To reach Jope’s aim of increasing the operating margin slightly for the year, he will need to show he can follow P&G’s example and hike prices, without losing customers. (By Dasha Afanasieva)

Down under downer. Hearing a cautious investor urge greater caution sounds like a serious belt-and-braces approach. Australia’s sovereign wealth manager, led by Chairman Peter Costello, is a case in point. It already stuffed almost 20% of its eponymous Future Fund into cash. In a quarterly update released on Thursday, it added inflationary fears to the “potential for setbacks” in its outlook, a day after the latest data on Australian prices showed a slim 0.6% increase.

In any event, the fund only has 7% of its assets in Aussie stocks. It is, however, thinking longer-term, evidenced in part by its offer to buy Australian wind-farm operator Tilt Renewables. And it has been largely successful. Assets in the core fund hit a record A$179 billion ($139 billion) last quarter. Its 10-year return of 9.1% is healthy for a conservative investor, and just shy of the average return of local superannuation growth funds. With that kind of performance, why throw caution to the wind? (By Antony Currie)

Ari Emanuel, Hollywood mogul and the CEO of Endeavor, poses before the public listing of EDR on the NYSE in New York City, U.S., April 29, 2021.