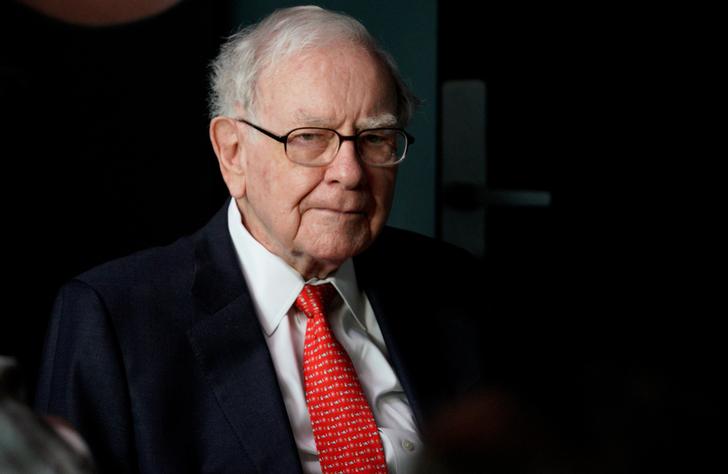 Sage advice. It has long been suspected that the uber-rich use tax loopholes to reduce how much they pay Uncle Sam. A ProPublica report on Tuesday estimated how little Warren Buffett, Jeff Bezos, and other billionaires pay to the Internal Revenue Service based on tax returns obtained by the nonprofit news site.

ProPublica analyzed data from 2014-2018 on total income reported and total tax paid to estimate what it called a “true tax rate.” The Sage of Omaha for instance paid nearly $24 million in taxes in that period, representing a measly tax rate of 0.1%, the news site said. Buffett told ProPublica in a statement he had paid the taxes he was owed. To put that in perspective, someone who earns on average $75,000 a year pays a federal income tax rate of around 20%, according to Americans for Tax Fairness.

True, the Berkshire Hathaway boss has been vocal about how little the rich pay relative to the general population and has urged the government to change that. And Biden wants to increase the capital gains tax rate that targets the rich to pay for his $4 trillion plan to help the economy. He should take Buffett’s advice to heart. (By Jennifer Saba)

Smoke signal. British American Tobacco’s higher revenue guidance is a sign its overhaul is working. The UK group reckons its 2021 revenue will grow more than 5% rather than between 3% and 5%, thanks in part to growth in products that carry less of a health risk.

This gets BAT closer to its 2025 goal of 5 billion pounds in revenue from products such as its Vype and Glo brands. Its revenue was 26 billion pounds last year, 1.4 billion pounds of which came from these newer products. Its ambitions are less lofty than those of Philip Morris International, which wants 50% of its revenue to come from smoke-free lines. It was at 28% in the first quarter.

That helps explain why BAT’s valuation drags behind the Marlboro maker. According to Refinitiv data it trades on 8 times forward earnings, compared to 11 times for PMI. How much this narrows hinges on how BAT and PMI’s respective overhauls pan out. (By Dasha Afanasieva)

Dressed for success. About You suits its new equity valuation. The German fashion e-commerce company, which aims to digitalise mall visits by creating a personalised shopping experience on smartphones for young teens, is looking to raise 941 million euros in a Frankfurt initial public offering. Tuesday’s implied price range of between 21 euros and 26 euros implies its equity is worth up to 4.4 billion euros.

That seems justifiable. The part of About You’s business which sells directly to consumers via its app generated over 1 billion euros of sales in the year to February. On the average 1.7 times multiple of rivals Zalando and Asos, it’s worth 1.9 billion euros. Meanwhile, its tech business is arguably akin to Canadian e-commerce giant Shopify, helps brands like Marco Polo sell clothes online and has revenue of 84 million euros. On Shopify’s 30 times sales, it could fetch 2.5 billion euros. And as lockdown eases sales may jump over 40% in the next year.

Even so, About You is taking the precaution of swerving a retail offering. French car parts distributor PHE pulled its IPO while music group Believe is expected to price at the bottom of its range. Having the greater flexibility on timing that comes from dealing only with institutions probably makes sense. (By Karen Kwok)

Double dipping. Flipkart is getting the ultimate endorsement. Masayoshi Son’s SoftBank Group is looking to pick up a stake in the Indian e-commerce outfit a second time as part of a $3 billion fundraising round that will value it at $40 billion. The Japanese backer sold its initial investment of at least $2.5 billion to current majority-owner Walmart in 2018 at a valuation some 60% higher than what it paid, bagging a substantial profit.

Son’s shopping spree in India has been a mixed bag, however. Three years ago, SoftBank and its Vision Fund had backed all the major local operators up against Amazon, sitting on stakes in Snapdeal and Alibaba-backed Paytm E-Commerce. Of the lot, only Flipkart has emerged as a serious competitor.

SoftBank’s double dip underscores Flipkart’s long growth trajectory ahead. Although the pandemic has been a boon, major cities like Mumbai restricted e-commerce to essential items during this year’s lockdown, holding back sales. Seeking outside investors and delaying a hotly anticipated U.S. initial public offering to next year will allow it to present better numbers. (By Una Galani)