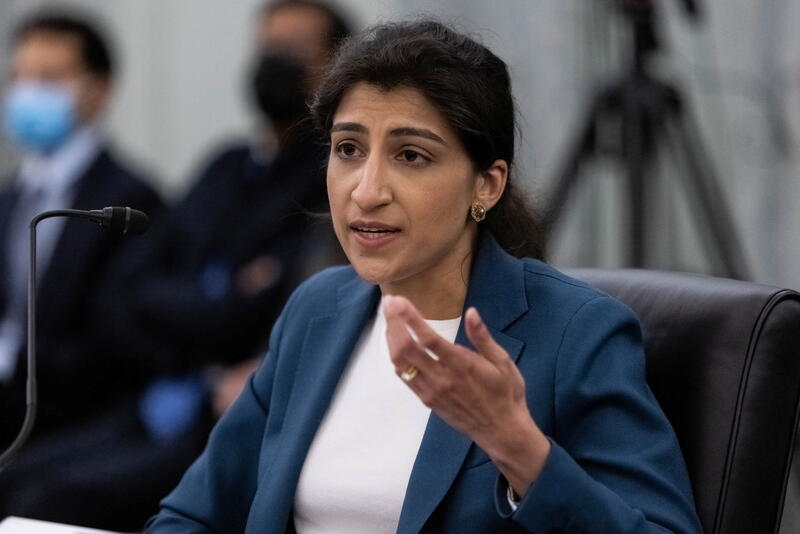 Regulating the regulators. The U.S. Federal Trade Commission has been a bit too sleepy in the past. That was the message of would-be commissioner Lina Khan, who made a splash as a law student with an article outlining an antitrust case against Amazon.com. Her comments during her Senate confirmation hearing on Wednesday portend a more muscular agency.

She said the FTC missed opportunities when it came to past merger reviews. She also noted that the agency has been slow to keep up with changing market dynamics, particularly in the technology sector. Over the last 15 years, the commission has approved Facebook’s acquisition of Instagram and WhatsApp, the sale of Whole Foods to Amazon and Google’s purchase of YouTube, both now part of the Alphabet group.

This might sound bad for the tech firms. In a way it is, because future mergers will get closer scrutiny. But Khan’s message is more nuanced: she is suggesting that the companies’ behavior was enabled by a too-limp watchdog. That puts the FTC, as well as the companies it oversees, on notice. (By Gina Chon)

Dyal P to proceed. A $12.5 billion merger-plus-blank-check deal can go ahead after a Delaware judge dismissed an effort to “muck up” the transaction. Dyal Capital Partners’ plan to merge with Owl Rock Capital and go public through a sale to a special-purpose acquisition company hit a snag in February when an investment firm Dyal owns a stake in, Sixth Street Partners, sued.

Sixth Street argued the merger would make it worse off and that Dyal needed its consent. Another Dyal-invested firm, Golub Capital, lost a similar bid in a New York court. On Monday, Delaware Vice Chancellor Morgan Zurn did not mince her words in giving Sixth Street the same treatment.

Sixth Street’s case was undermined by some contractual language, but also by the fact it had previously told its investors the deal was not a problem. Zurn concluded the firm had seized an opportunity to try to buy back the stake Dyal owned at a “lowball” price. The merger-and-SPAC deal remains a tangled one. But a troublesome knot has been cleared. (By Richard Beales)

Meme for me me. GameStop, the brick-and-mortar video-game retailer attempting a transition to the digital world, is best known for the Reddit-fueled stock-price surge that rocked trading platforms like Robinhood Markets early this year. Now it’s earning a place in the history of executive pay. Boss George Sherman is leaving and will collect a $179 million windfall, according to Reuters.

Part of that eye-watering sum stems from a change in Sherman’s pay targets, something companies including $11 billion GameStop did during the pandemic. For observers who see the average American chief executive making millions every year that’s not an edifying practice. Still, the parting gift owes most to the runup in GameStop’s stock price. On Monday, the company’s shares closed at $158.53 each. Last June, when Reuters says Sherman received stock grants, they traded at around $5 apiece.

Having earlier missed out on using its inflated share price to raise needed cash, the company is also now selling new equity. At least other investors and GameStop itself are cashing in alongside the CEO. (By Richard Beales)

New boss. Luxury underdog Hugo Boss has stepped into the limelight. Shares in the German maker of men’s suits jumped 8% on Wednesday amid rumours of potential bid interest from rivals including Bernard Arnault’s conglomerate LVMH and Gucci-owner Kering. The company is certainly vulnerable. Demand for formal menswear has dried up in the pandemic. But any suitor would need to make some serious alterations to get a proper fit.

An offer at a 30% premium to Tuesday’s closing market price would value Hugo Boss at around 4 billion euros including debt. Even if the buyer could cut costs equivalent to a chunky 15% of Hugo Boss’s expenses, lifting its expected 2023 operating profit to around 350 million euros, the new owner would earn a return on investment of just 6%, Breakingviews calculations based on Refinitiv data show. That’s well below the company’s 9% cost of capital. Hugo Boss may need another spin around the catwalk. (By Lisa Jucca)

Benign overlords. Fears of robots replacing humans in the asset management industry may be overstated. That’s one lesson from a relatively richly valued deal announced on Tuesday to bring artificial intelligence specialist Insig AI onto the London market. It’s being acquired by AIM-listed holding company Catena at an equity value of 66 million pounds ($93 million), despite generating just 2.7 million pounds of revenue in its most recent financial year.

Founded by Steve Cracknell and Warren Pearson, who worked together at Goldman Sachs, Insig AI’s idea is to sell proprietary tools so that fund managers can benefit from machine learning without having to hire a squadron of data geeks.

It’s a reassuring message for old-school portfolio managers worried about being replaced by an algorithm. Cracknell and Pearson’s thesis is that AI can help fine-tune investment strategies, for example by crunching data on companies’ sustainability reports so that fund managers can pick their own environmentally sound stocks. Investors may end up welcoming rather than fearing their new robot overlords. (By Liam Proud)

Gulp! Uber Technologies is trying to grab a slice of Just Eat Takeaway.com’s lunch. According to the Financial Times, the $103 billion technology group is unleashing its food delivery unit in Germany, one of its rival’s most lucrative markets. Just Eat Takeaway.com shares fell more than 4% on Wednesday morning.

Last year, Germany accounted for 374 million euros of sales, or 16% of the combined revenue of the group, which was created a year ago from the merger of Just Eat and Takeaway.com. More importantly, it is profitable, generating 125 million euros in adjusted EBITDA in a market where others have struggled. Rival Deliveroo raised the white flag in 2019 and exited. Uber’s incursion, however, may be well timed as boss Jitse Groen focuses his efforts on cracking the United Kingdom and the United States. Trying to fend off a deep-pocketed competitor in another major market might be enough to spoil his dinner. (By Karen Kwok)

Investors still need convincing. Carrefour trades on less than 11 times its forward earnings, a sharp discount to a sector average of 19 times, according to Refinitiv. It even lags debt-plagued domestic rival Casino Guichard Perrachon. Chief Executive Alexandre Bompard’s successes in Brazil and the domestic turnaround attracted interest from Canada’s Alimentation Couche-Tard, which attempted a takeover in January. The risk for Bompard is the French recovery going into reverse when the pandemic is over. (By Aimee Donnellan)

Barbarians rebuffed. Who snubbed who first? Toshiba’s shares fell 5% early Wednesday after it spurned a $20 billion approach by private equity giant CVC for lacking the detail needed for full evaluation. Yet the letter, per media reports, also said CVC was pausing anyway to allow the Japanese conglomerate’s new chief executive to talk with shareholders.

CVC’s surprise approach, which surfaced two weeks ago, boosted Toshiba’s stock 29% to a 6-year high by April 14 – the day that boss Nobuaki Kurumatani, formerly an executive with the buyout group, resigned.

Shareholders have already warned that CVC was lowballing the scandal-plagued group. The shares never quite reached the roughly 5,000 yen implied in CVC’s numbers, and closed Wednesday at 4,205 yen. A Reuters report of bid interest from CVC rival Bain spurred a rally late in the day. Now up 7% from pre-CVC levels, there is still some flickering bid hope – but it isn’t very strong. (By Jennifer Hughes)