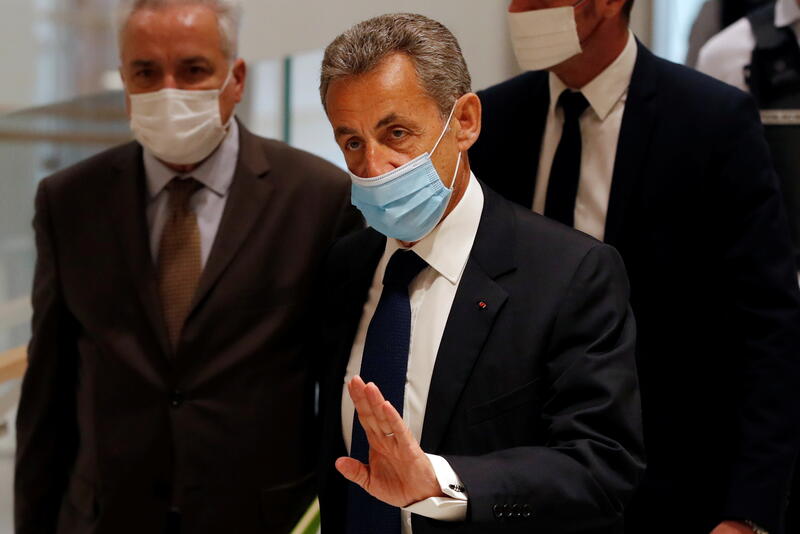 L’exception Francaise. Is there a precedent for having a convicted criminal on the board of a listed company? That’s the question facing Accor and Lagardère on Monday after former President Nicolas Sarkozy was found guilty of trying to bribe a judge and sentenced to three years in prison. The man dubbed “hyperpresident” is an independent director of the $11 billion Paris-listed hotel chain run by Sebastien Bazin. He also sits on the supervisory board of the $4 billion owner of Paris Match.

Complicating matters is Sarkozy’s close relationship with Qatar, whose sovereign wealth fund owns big stakes in both companies. In 2008 he granted tax breaks to one of the world’s richest states on French property assets. Still, Sarkozy can appeal. And with two years of his sentence suspended and the possibility of wearing an electronic bracelet for another year, he may escape jail time. That could make French boardroom drama even more interesting. (By Christopher Thompson)

Crypto for your wall. Finally, there’s a clear-cut use for blockchain technology. Digital art is ripe for unauthorized duplication. So-called non-fungible tokens or NFTs can be used to turn an artist’s work into a one-of-a-kind digital token worth millions.

It’s hard to pin down the fundamental value or usefulness of cryptocurrencies like bitcoin and ether. Yet the steep – if volatile – runup in their dollar prices, taking the theoretical outstanding value of these two combined to over $1 trillion, shows their appeal to geeks, establishment skeptics and, increasingly, regular investors – at least at the margin.

Art collectors are now also on the list. Early NFT efforts brought the world CryptoKitties, as Wired reminds us. Trading them initially clogged up the ethereum blockchain. “Everydays: The first 5000 days” by artist Beeple, also known as Mike Winkelmann, is the progeny of those frivolous cats. As of Monday morning, the high bid for the 5,000-image digital collage is $3 million in a Christie’s auction that runs until March 11. Ether accepted, of course. (By Richard Beales)

Trust fund. Trustpilot is giving investors a chance to review its own business model. The Copenhagen-based online review platform on Monday submitted an intention to float on the London stock exchange. It makes money by selling subscriptions to businesses, who can use reviews by consumers of their enterprises in their marketing materials and to gain insights via data analytics. In 2020, Trustpilot had 19,500 subscribed clients paying an average contract value of about $5,600. The subscription model marks it out from review websites Tripadvisor and Yelp, which focus more on advertisement revenue.

With 120 million customer reviews of over 529,000 websites in 2020, Trustpilot’s revenue surged 25% year-on-year to $102 million. With almost no debt, a mooted 1 billion pound valuation would mean it trades on 14 times sales. That’s in line with the average of listed U.S. rivals HubSpot and Tripadvisor. Yet growth in Trustpilot slowed in 2020 compared to a year before, it made a pre-tax loss of $12.9 million, and it has had issues before with fake reviews. It shouldn’t count on investors’ feedback becoming a lot more glowing. (By Karen Kwok)

Taking off. Norwegian aviation looks like Darwinian capitalism in action. Shares in startup carrier Flyr jumped 28% on its debut on Monday, valuing it at $111 million. A private placement last month raised $70 million from investors. That’s a lot to chuck at an airline that doesn’t yet have planes or an operating licence – unless the competition is on life support.

Founded in a pandemic, Flyr is clearly not for the faint-hearted. Its investor presentation leads with 10 pages of risk factors. Yet there’s much in its favour. Norway’s sparse population, separated by fjords, has greater need for domestic flights than most. And Covid-19 has decimated rivals like Norwegian Air Shuttle, now in administration. That also means pilots and planes are cheap. Flyr reckons aircraft leasing costs are half historic levels. Low-cost European carriers Ryanair and Wizz Air display similar survival-of-the-fittest resilience. Their shares are up 12% and 27% from pre-coronavirus levels. (By Ed Cropley)

Raise the roof. Rishi Sunak is handing UK housebuilders another potential bonus. The UK finance minister will announce a new mortgage guarantee scheme when he unveils his budget on Wednesday, the Treasury said over the weekend. The plan will encourage banks to lend to buyers with just a 5% deposit for a property worth up to 600,000 pounds. Investors are betting that Persimmon, Barratt Developments and Taylor Wimpey will be among the winners. Shares in the UK housebuilders rose between 6% and 7% on Monday morning.

The scheme, which should lure banks back into riskier mortgage lending amid the pandemic, is the latest official effort to prop up the housing market. The UK previously offered “Help to Buy” loans for first-time buyers, and more recently introduced a holiday on property transaction taxes. It should also help housebuilders. In 2017 Persimmon paid a $100 million bonus to its then-CEO after the company’s share price soared as a result of “Help to Buy”. Bonuses for construction executives look as safe as houses. (By Aimee Donnellan)

Profit charming. Technology-focused China Renaissance is doing better than some of its clients’ share prices. The Hong Kong-listed investment bank said on Monday it expects a 311% rise in net profit for 2020. Gains come from its investment management unit and its advisory work, which included fintech lender Lufax’s $2.4 billion New York initial public offering and the $3.5 billion Hong Kong debut of JD Health.

Shares jumped over 9% on the news, leaving China Renaissance just shy of last month’s all-time peak. That only adds to its relative priciness: the stock trades at 1.9 times estimates of its book value for 2021, versus 1 times for the Hong Kong shares of rival China International Capital Corporation and 1.4 times international giant Morgan Stanley.

Bankers are off to a good start in 2021 with listings galore planned but both those and the chances of China Renaissance repeating its gains depend on stocks remaining all charged up. (By Jennifer Hughes)

(The Trustpilot article has been corrected to change the sales multiple in the second paragraph from 10 times to 14 times, and to change “That’s cheap” to “That’s in line with”.)

Former French President Nicolas Sarkozy, wearing a protective face mask, arrives for the verdict in his trial on charges of corruption and influence peddling, at Paris courthouse, France, March 1, 2021.