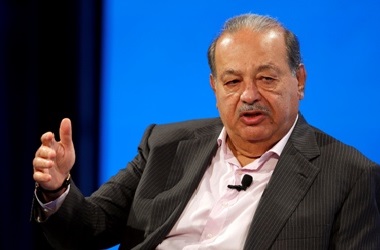 The world’s top billionaires are battling for Spanish property. Bill Gates, George Soros and Amancio Ortega have all taken stakes in real estate companies or bought emblematic buildings in Spain. Now Carlos Slim is building his own Spanish empire on the cheap.

Last December the Mexican magnate beat out Soros to become the largest shareholder in builder FCC after a 1 billion euro rights issue rescue left him with a 25.6 percent stake. Slim’s arrival gave the company some much-needed breathing space from its lenders. He has four of 12 seats on the board. Heiress and former top shareholder Esther Koplowitz controls another four.

Slim hasn’t wasted time in making his mark. He placed one of his own men, Miguel Martinez, as FCC’s new chief operating officer. He also named the chief executive of Cementos Portland, which is 78 percent owned by FCC. Now he has bought a 25 percent stake in property firm Realia from lender Bankia at a large discount to the market price. He is eyeing a takeover in the next nine months. Property company Hispania had bid an even lower price than Slim.

Realia is where the corporate governance starts to get fuzzy. FCC owns 37 percent of Realia and had plans to sell the stake. The plans were put on hold after Slim’s arrival. It’s not clear whether FCC would now sell to Slim. The headline price looks low, but Realia requires fresh capital. Even if FCC stays put, Slim would effectively control Realia via his direct 25 percent stake, and through his FCC shareholding. That pretty much rules out a counterbid from Hispania, which counts George Soros and John Paulson as shareholders. At least Slim has offered to buy out the rest of Realia’s shareholders at the same price.

The Mexican has a big say in all three companies via FCC. Arguably, the infusion of fresh capital and Slim’s business acumen could be a boon for FCC, which also counts Bill Gates as minority shareholder. Slim’s contacts could open doors to lucrative contacts in Latin America. But his interests may not be always aligned with minorities in those companies. Going along for the ride has its risks.

Spain’s Bankia agreed to sell a 25 percent stake in property group Realia to Inmobiliaria Carso, a holding company for Mexican billionaire Carlos Slim. He paid 0.58 euros a share, a discount of nearly a third to the closing price on March 4, and agreed to launch a takeover for the rest of the shares within nine months at the same bid price.

Property investment company Hispania made a takeover offer for Realia in November for 0.49 euros per share.

Carlos Slim became the largest shareholder in builder FCC last December with a 25.6 percent stake after buying shares in the company’s 1 billion euro rights issue. As part of the increase, he acquired the subscription rights from top shareholder Esther Koplowitz, who now owns 22.4 percent. They each have four seats on the 12-strong board.