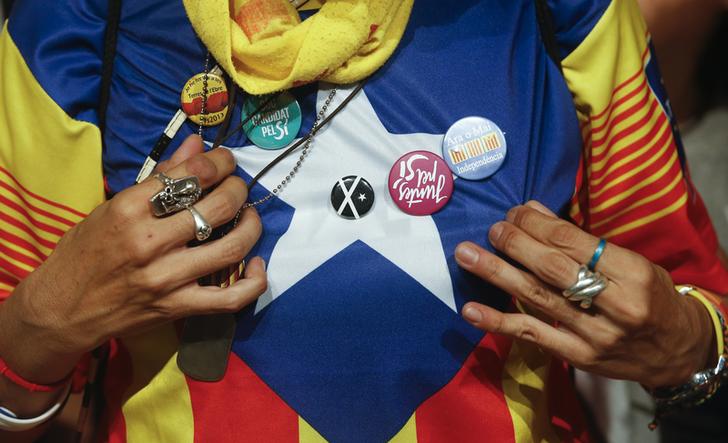 Spanish yields fell after pro-independence parties failed to win a majority of votes. True, Catalonia now has a doubtful mandate to secede unilaterally – but secessionists still won a majority of seats. Madrid’s next government will have to work hard to defuse tensions.

A Junts Pel Si (Together For Yes) supporter displays pins after polls closed in a regional parliamentary election in Barcelona, Spain, September 27, 2015.

Pro-independence parties in Catalonia won 47.8 percent of the vote on Sept. 27, but won a majority of seats in the regional parliament. The pro-independence platform (Junts pel Si) won 62 seats, while the similarly secessionist Popular Unity Candidacy (CUP) got another 10 seats, securing a total of 72 out of 135 seats. The turnout was a record 77 percent.

Artur Mas, the regional government head, said the results gave the platform legitimacy to push ahead with its secessionist mandate. He will need the support of the radical CUP to form a government.

Ciudadanos, the centrist party, secured 25 seats against nine seats in the 2012 election. The socialists lost four seats to get 16, while Spain’s ruling PP party lost eight seats to get just 11.