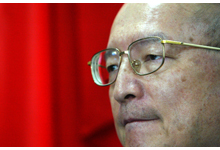 China Development Bank is on a roll. The policy lender raised 1.2 trillion yuan ($193 billion) in net domestic funds in 2012, according to Reuters data. The proceeds funded high-profile foreign takeovers, allowed U.S.-listed Chinese companies to go private, and helped Indian billionaire Anil Ambani refinance bonds. Such activities have less to do with development than with China’s financial dysfunction.

Unlike other big banks, CDB’s funding comes not from deposits but bonds that China’s big lenders have an unofficial mandate to buy. Because their loans are capped, most banks have abundant excess deposits that need to be parked somewhere. CDB’s one-year bonds yield around 50 basis points more than one-year deposits, so banks make money on the trade. CDB also has tremendous influence – chairman Chen Yuan is the son of a revolutionary war hero.

With steady funding and good connections, CDB has effectively grown into two banks. The bulk of its $888 billion loan book funds projects that promote China’s development, often using a kind of vendor financing to help Chinese companies sell products and services overseas, from Ghana to Uzbekistan. That helps China keep employment up, and subsidise favoured industries.

The other part looks more like a carefree corporate financier. CDB helped fund the Hong Kong Exchange’s bid for London Metals Exchange, and financed take-private deals for foreign-listed Chinese companies like online retailer Alibaba.com. CDB also financed the $9.4 billion purchase of a stake in insurer Ping An by a Thai entrepreneur, though may be having second thoughts.

CDB doesn’t enjoy cheaper funding than commercial banks. Instead, its main advantage is that it’s not very transparent, and doesn’t have to worry about institutional shareholders. So long as it pays dividends to its government owners, CDB can afford to sacrifice earnings. Its net interest margins of 2 percent are below its main rivals, yet its non-performing loan ratio is half theirs, raising fears that tricky debts are being rolled over.

CDB still performs a valuable development role. It may also be helping riskier borrowers underserved by risk-averse banks and underdeveloped bond markets. But its growth postpones the day that China’s financial system starts allocating credit properly. Meanwhile, every below-market loan is a value transfer from Chinese depositors to CDB’s borrowers. In the name of building China’s global influence, savers are getting short changed.

China Development bank raised 1.2 trillion yuan ($193 billion) in bond issues during 2012, after deducting bonds payable during the year, according to filings compiled by Reuters Eikon. That compared with a net 1.6 trillion yuan issued in 2011, the data showed, which includes bonds issued in foreign currency.
CDB was founded in 1994 to further China’s development goals, and gives its mandate as “the development of a robust economy” including infrastructure, basic industries and cross-border investment, according to its 2011 annual report. The bank’s loan book was 5.5 trillion yuan ($888 billion) at the end of 2011.
The bank, funded mainly through bonds issued in the interbank market, is jointly owned by the Ministry of Finance and Central Huijin, the state vehicle that holds shares in several big Chinese banks.