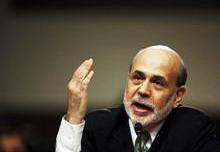 The Federal Reserve will celebrate its centennial in 2013. Though independence for the U.S. lender of last resort and its peers elsewhere has historically come and gone, in recent decades it has become an article of faith. But these days, faith in central banking is far from rock solid.

Independence for the management of monetary affairs is supposed to allow prudent policymaking that is insulated from short-term political pressures. That should provide, for instance, the freedom to quash voter-pleasing bubbles. The problem is that Western central banks are looking more like volatile players than stable referees. To start, the sheer size of their balance sheets has expanded dramatically. Since 2007, the eve of the financial crisis, British and Swiss central bank assets have surged roughly five-fold, while the U.S. and European equivalent holdings have both approximately tripled. In the UK and the euro zone, central bank balance sheets have already swollen to around 30 percent of GDP.

And central banks are taking the sort of risks that normally merit political scrutiny. Ben Bernanke, the Fed chairman, portrays unprecedented post-crisis activities like quantitative easing – large-scale bond-buying programs undertaken by the Fed, the Bank of England, the European Central Bank and others – as technical variations of traditional monetary policy. But critics see QE as straying into the government’s fiscal realm, distorting financial markets, fueling future inflation, or all of the above.

Central banks also have responsibilities which are undeniably political. The Fed is America’s most powerful bank regulator, the lender of last resort and, especially now, a major influence on interest rates and financial asset prices. The Bank of England, which gained monetary policy independence only in 1997, is about to take on a bigger watchdog role. Even in Japan, where the central bank has maintained a near-zero interest rate policy for well over a decade and is supposed to operate in harmony with government policy, newly elected Prime Minister Shinzo Abe wants more influence.

Up to now, central banks have been able to defend their autonomy, which anyway isn’t complete. But anti-Fed political rhetoric and demands for greater accountability resonate with some American voters and many economists struggle to defend institutions which failed to predict or prevent the worst financial crisis in decades. Another big error or an unpopular move – perhaps a return to more typical interest rates – could mean the beginning of the Fed’s second century is marked by an assault on central bank independence.

The U.S. Federal Reserve, now chaired by Ben Bernanke, was established in 1913.

The U.S. Federal Reserve, now chaired by Ben Bernanke, was established in 1913.