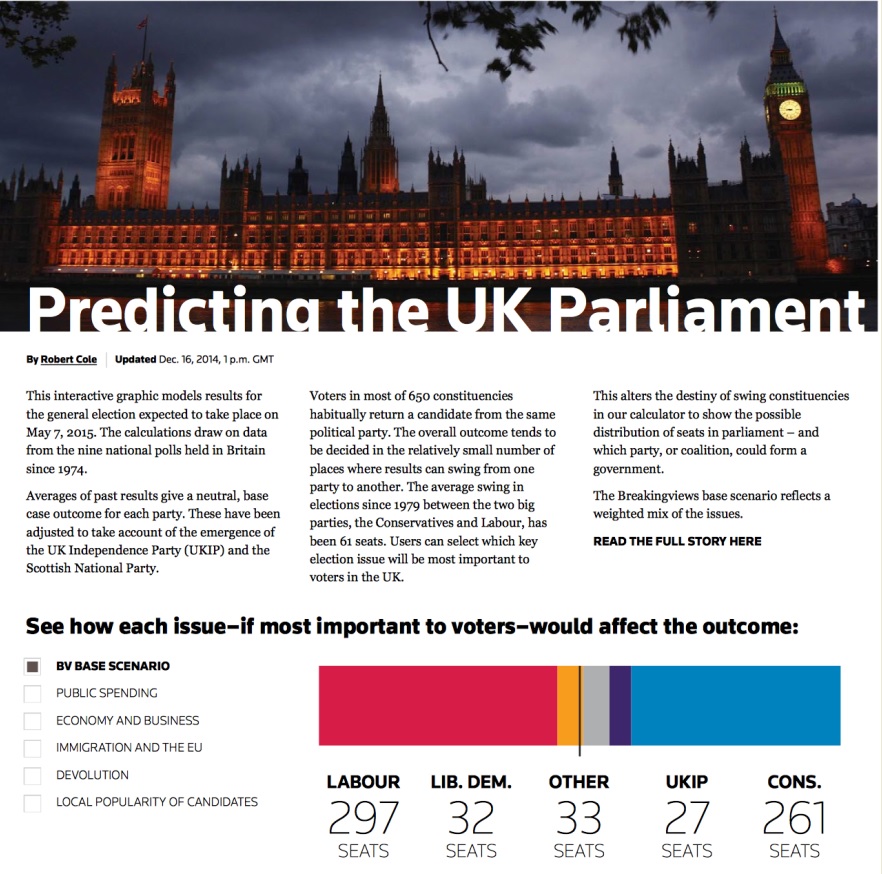 Britain’s three main political parties are weak. Its two nationalist groups are stronger. The probable five-way fight in the 2015 general election, due in May, will be unusual. It is also likely to produce an inconclusive result. A new Breakingviews calculator suggests, however, that a Labour-led coalition could take power.

The post-crisis Conservative-led coalition government under Prime Minister David Cameron has overseen an economic recovery, with official estimates showing solid 3 percent GDP growth in 2014. But history shows that doesn’t necessarily translate into re-election. Voters may also shrink from the Conservative message – underlined in the budget update on Dec. 3 – that the UK’s public finances must be further strengthened by cuts in public services.

Heated debate about immigration and the UK’s membership in the EU will help the upstart UK Independence Party. Recent mid-term results suggest UKIP will take votes from both major parties. But many of the party’s politicians, including its two current members of parliament, are Conservative defectors, suggesting Cameron’s party has most to lose.

Labour is vulnerable to another grouping – people who support Scottish and Welsh devolution and even secession. Ed Miliband’s party could lose seats to the Scottish nationalists. But the two groups are natural allies against the Conservatives. Pro-European Liberal Democrats, whose MPs often attract strong local support, are also unlikely to back a Tory party with a hardening anti-EU stance despite their current role in the governing coalition.

The Breakingviews interactive UK Election Calculator suggests that Labour will win an outright majority if public spending is the only driver of the vote. If business and the economy dominate and the Conservatives get the credit, they may scrape back into power.

The base case used by Breakingviews reflects a blend of voter concerns, with public spending as the hot issue working in Labour’s favour but economic factors offsetting this and helping the Tories. Other issues will count, too, but with a more muted national impact. With these assumptions overlaid on voting patterns since 1974, no single party emerges as an outright winner, but Labour takes the largest number of seats.

A five-way contest could bring a result that is unstable enough to force a second election in 2015. Together, however, the left-of-centre parties could win a majority of the seats in the Westminster parliament. If they can bury their differences, they have the best chance of forming a government.

The United Kingdom will hold a general election on May 7, 2015. In the last vote of May 2010, the Conservative Party won 306 of the 650 constituency contest seats, the Labour Party 258, the Liberal Democrats 57. Scottish and Welsh Nationalists took 9 seats.

Mid-term by-elections have given the UK Independence Party two members of parliament.

The United Kingdom will hold a general election on May 7, 2015. In the last vote of May 2010, the Conservative Party won 306 of the 650 constituency contest seats, the Labour Party 258, the Liberal Democrats 57. Scottish and Welsh Nationalists took 9 seats.

Mid-term by-elections have given the UK Independence Party two members of parliament.