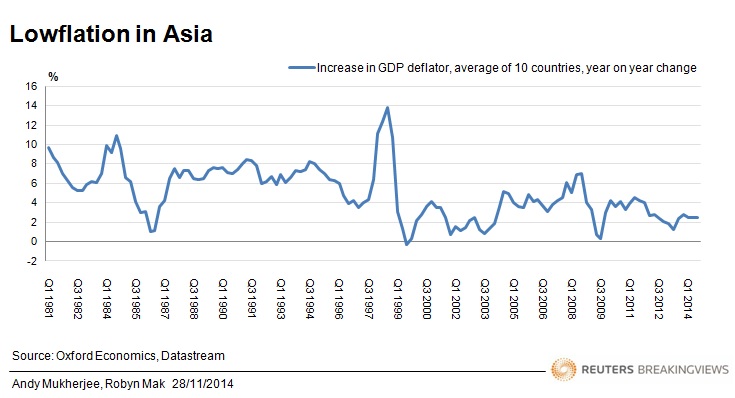 Crude fell to a fresh four-year low after the OPEC oil cartel refrained from cutting production at its Nov. 27 meeting. The 34 percent slump in prices so far this year would usually be good news for Asia, a net energy importer. Consumers and companies would spend the money they saved on petrol and diesel on other things. Domestic demand would move into a higher gear.

Tumbling oil is still good for India and Indonesia, whose governments subsidise the cost of energy. A lower subsidy bill loosens their fiscal straitjackets, freeing them up to spend more on infrastructure. But these countries haven’t accumulated as much debt. For leveraged economies like China, South Korea, Thailand, Malaysia and Singapore, the rout in commodities has come at a bad time.

In China, companies are overleveraged. In other places, individuals are stretched. Household debt in Korea, Malaysia and Thailand is now in excess of 80 percent of GDP; it’s 76 percent in Singapore. When borrowers loaded up on debt, they expected three things: Money-printing in rich nations would keep borrowing costs low for an extended period; domestic property prices would keep rising; and steady inflation would boost wages, reducing the real household debt burden.

The third part of this equation has buckled. Inflation is low – and slowing – across Asia. As oil prices fall, the slide will accelerate. In Korea, China and Singapore, deflation is now a real threat.

Asian economies are not completely helpless. Singapore’s high dependence on foreign labour means it can force companies to make do with fewer overseas-born workers, so that citizens get higher wages. More generally, though, lowflation could curb Asian spending power.

To the extent it’s a symptom of weak global demand, cheap oil is unlikely to be a harbinger of good times for the export-reliant region. And if national authorities are late in using monetary and fiscal policies to fight lowflation, the typical Asian household risks falling into a debt trap.

Oil exporting group OPEC shied away from cutting production to arrest a slide in global prices at its Nov. 27 meeting in Vienna, sending benchmark crude plunging to a fresh four-year low.

Brent oil fell more than $6 to $71.25 a barrel. The OPEC ministers’ decision to hold production at 30 million barrels a day was a major shift away from its long-standing policy of defending prices, Reuters reported.

The People’s Bank of China sees slowing inflation as the “most prominent problem” facing the economy and also the primary reason behind its recent cut in interest rates, deputy governor Hu Xiaolian said at a forum in Beijing on Nov. 27, according to a report in South China Morning Post.