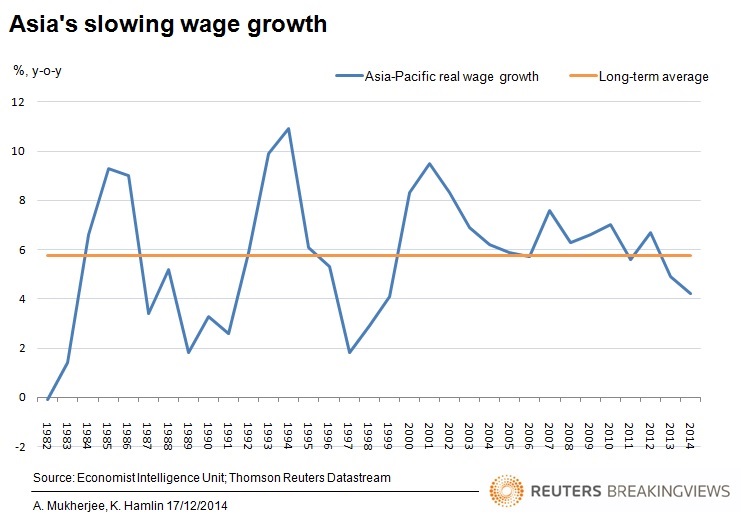 Cheaper fuel sounds like something no household would turn down. Yet falling energy prices are presenting Asia with a worrying prospect: wage growth may slump just when extra income is most needed.

Most Asian countries are net importers of energy, minerals and other raw materials. Australia, Malaysia and Indonesia are the exceptions. For the rest, falling commodity prices ought to lighten the load on consumers’ wallets. That would be welcome, since inflation-adjusted wages in Asia-Pacific are growing 2 percentage points below their long-term average, reflecting labour’s weak bargaining power amidst slowing GDP growth.

The benefits of cheap fuel depend on them dripping through to end users. But employers, under pressure to pass through some of the savings to consumers, may try to claw them back in other ways. In China, companies have already been seeing the prices they get for goods, measured by the producer price index, fall for 33 straight months. With the exception of Indonesia, producer prices are hardly rising anywhere in the region. In the absence of pricing power, Asian companies are likely to try and shore up their own margins by being miserly with wages.

Governments have a similar motivation. India is likely to harvest annual fiscal savings of $12 billion by pruning energy subsidies and by raising taxes on oil products, Reuters reported recently. The result is that consumers’ energy expenses aren’t falling as much as they could have. In Thailand, diesel has become only 7 percent cheaper, according to Tisco Securities, even though crude oil prices have dropped more than 40 percent over the past six months.

Back in 1986, oil prices fell by half; yet Asian real wage growth was lacklustre for the next several years. If history repeats itself, the slump in commodities could prove to be less of a friend to households, and more of a source of disappointment.

The average real wage growth in Asia-Pacific is expected to slow to 4.2 per cent this year, from 4.9 percent in 2013 and 6.7 percent in the previous year, according to the Economist Intelligence Unit. The EIU’s calculations are based on percentage change in hourly wages in local currency adjusted for inflation. The region comprises Australia, China, Hong Kong, India, Indonesia, Japan, Malaysia, New Zealand, Pakistan, Philippines, Singapore, South Korea, Taiwan and Thailand.

Household debt in Korea, Malaysia and Thailand is now in excess of 80 percent of GDP, according to Bank of America Merrill Lynch. It’s 76 percent in Singapore.