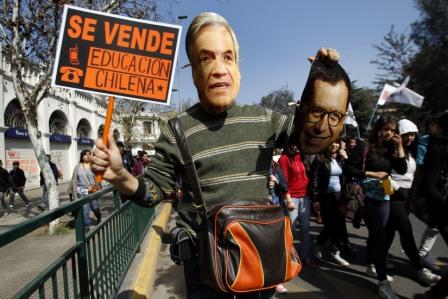 Spring is in the air in Santiago, but the Chilean Winter is still in season. Massive street protests over education will resume on Thursday. As easy as it might seem to lump these with unrest elsewhere, Chile’s unrest is of a different order. Fundamentally it is a test of the economic model that has made the nation Latin America’s shining star.

Chile’s educational system reflects the country’s philosophical preference for private, market-based – rather than public – solutions to social and economic problems. During the brutal dictatorship of General Augusto Pinochet, and under the tutelage of academics from the University of Chicago, Chile embarked on a free-market path unlike any of its neighbors’.

This mostly served Chile well. In 1990, per capita GDP stood at $5,000 a year, on a purchasing power parity basis, in line with the rest of Latin America. Today it’s close to $20,000, some 50 percent ahead of the region, Banchile economists calculate. In a sense, the education debate is a developed world problem. The question isn’t whether citizens go to school, but rather the quality of instruction they receive.

Yet here the Chilean model hasn’t delivered in ways that may hamper future growth. The country ranks well below the OECD average in reading, math and science scores, despite its households shouldering more of the cost of education than any other nation. Growth in productivity has been declining for years. Anecdotally, business leaders and entrepreneurs complain of a workforce simply unable to suit their needs.

It’s hard not to see Chile’s application of free-market principles to learning as part of the problem. It has created a stratified system where fewer than half of high school students attend public schools because of their low quality. And despite Chile’s huge financial gains, no new public universities have been founded since the Pinochet era.

As a result, protesters want to abolish the profit motive entirely from education. For the center-right government of billionaire president Sebastian Piñera that would be a repudiation of the laissez faire principles on which Chile’s success is based.

But polls show the vast majority of Chileans favor educational reform – and that Piñera is the least popular Chilean leader since Pinochet’s 1973-1990 dictatorship. Put it all together, and the price of thawing the Chilean winter looks evident: sacrificing a wee bit of free-market ideology.

Chilean students demanding better, state-subsidized education are expected to resume protests on Sept. 29 in Santiago and other cities. Last week, organizers said some 100,000 students, faculty and supporters converged in the streets of the capital.

A demonstrator wears a mask of Chile's President Sebastian Pinera as he holds a banner against the government's public education system in Santiago.

Chilean students demanding better, state-subsidized education are expected to resume protests on Sept. 29 in Santiago and other cities. Last week, organizers said some 100,000 students, faculty and supporters converged in the streets of the capital.