The wages of Cinda 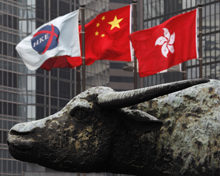 China’s biggest bad bank has emerged as a not-so-bad public offering. Cinda Asset Management was created to suck bad loans out of overstretched lenders; these days it mostly takes bad debts from companies. The theory behind its Hong Kong listing is that if the economy worsens, there’s more to buy. That logic has already lured investors like the Abu Dhabi Investment Authority and hedge fund Och-Ziff.

Cinda’s origins are legendary: the company bought 800 billion yuan ($130 billion) of bad loans from state banks in the early 2000s, much of it at face value. In return, it issued the state with bonds it had no prospect of repaying. The Ministry of Finance, Cinda’s largest shareholder, eventually stepped in and helped.

Investors in the new Cinda are spared that backstory. With original debts written down or recovered, the company is now buying up delinquent loans from companies instead: these now make up 57 percent of Cinda’s total distressed debt portfolio. With China’s national non-government debt at more than 150 percent of GDP, that business should boom.

To fund this capital-intensive process, new investors are being asked to inject the equivalent of 15 billion yuan. Cinda had cash reserves of 30 billion yuan at the end of June. But with 120 billion yuan of the company’s own borrowings due in the next two years, 34 billion yuan of it due to the Ministry of Finance, and a splurge of 31 billion yuan on buying new “receivables” in the first half alone, it’s clear outside help is needed.

Those who already scorn China’s financial sector won’t be converted. Worsening credit conditions may create new bad debts, but Cinda’s 130 billion yuan book of acquired loans and equity stakes will deteriorate too. Half of the debt is in the real estate sector, and backed by assets like land and buildings; a property crash is a big vulnerability.

Diversification sweetens the pill, however. Among other things, Cinda also offers sub-scale insurance and securities businesses, a fast-growing trust company and a portfolio of unlisted shares it says are worth twice the value on the books. That should be enough to put a decent spin on a bad bank.

A bull statue is seen in front of flags of (L-R) Hong Kong Exchange, China and Hong Kong outside the Hong Kong Stock Exchange

China Cinda Asset Management filed its prospectus for a Hong Kong stock market listing that could raise $2.5 billion in new money, according to sources cited by Reuters.

Cinda was founded in 1999 to handle bad debts from China Construction Bank, one of the country’s biggest state-owned lenders, and China Development Bank. It bought 396 billion yuan ($65 billion) of bad loans at face value, and undertook debt-for-equity swaps with around 400 state-owned enterprises.

The company in 2004 bought assets worth a further 279 billion yuan from CCB and Bank of China ahead of their stock market listings, through a competitive bidding process. Early acquisitions were funded through a mixture of bond issuance and borrowings from China’s central bank.

Cinda held company shares with a book value of 44 billion yuan as a result of debt-for-equity stocks at the end of June 2013, of which 62 percent was in the coal industry, and the majority was unlisted. Its top 20 unlisted equity stakes were valued by American Appraisal as being worth 225 percent of their book value.