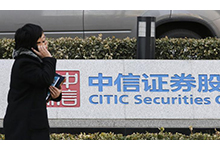 Investment bankers in emerging markets are having a tough few weeks. Two top CITIC Securities executives have disappeared while Andre Esteves, the chief executive and founder of BTG Pactual, is in jail. The similarities end there, though. While the Brazilian investment bank is in crisis, state support and a different business mix should allow China’s top broker to survive its leadership vacuum.

There’s no doubt that CITIC Securities’ investment banking unit is in turmoil. The heads of its domestic and international arms are out of contact and believed to be helping state graft-busters with their enquiries. Even so, the company’s assertion that its business is operating as normal is not as far-fetched as it may seem.

Charismatic rainmakers play a less central role at CITIC Securities than at most investment banks. Even when markets were booming in the first half of 2015, only 7 percent of the broker’s operating profit came from advising on stock offerings and mergers. The more mechanical businesses of securities trading, margin lending and other brokerage operations brought in 85 percent of the total.

Backing from one of the country’s most powerful conglomerates also lowers the risk that clients and counterparties will suffer a self-fulfilling loss of confidence. Though Chairman Wang Dongming announced last month that he was retiring, CITIC chairman Chang Zhenming is expected to step into his shoes – and also take on the important position of party secretary.

BTG Pactual seems more vulnerable. Even though two well-respected executives have replaced the charismatic Esteves it is selling assets at fire-sale prices to raise funds. The bank’s shares have more than halved in value since the arrest.

CITIC Securities faces the challenge of rebuilding its senior team. The inevitable disruption may play into the hands of rival investment banks like China International Capital Corp, which was not as involved in the country’s stock market boom and bust. Yet with Chinese investigators setting their sights on the financial industry, rivals are also under scrutiny. Staff at brokerages Haitong Securities, Guotai Junan and Guosen – as well as regulators and journalists – have all been pulled in for questioning.

All this means CITIC Securities should be able to weather the sudden loss of senior bankers better than its Brazilian counterpart.

A woman walks past a signboard of CITIC Securities at its head office in Beijing.

CITIC Securities announced on Dec. 6 that it was unable to contact two of its top investment banking executives. Chinese magazine Caixin reported as many as six of eight members of the broker’s executive committee were under investigation.

The announcement came two weeks after CITIC Securities Chairman Wang Dongming announced he was retiring. The chairman of its largest shareholder CITIC Group Chang Zhenming is expected to take his place.

As of close of business on Dec. 9, shares in CITIC Securities had fallen 3.7 percent from the market close on Dec. 4, and were down 41 percent since the beginning of the year.