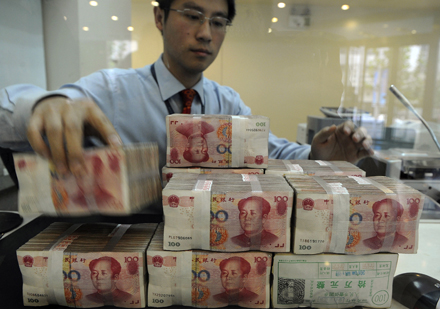 Mobile phone users can now pay each other with barcodes. Coins and notes are starting to look passé. It’s part of Chinese citizens turning away from liquid but low-yielding assets. As savers demand higher returns but instant access to funds, risk is mounting.

An employee counts Chinese banknotes at a bank in Hefei. The internationalisation of the renminbi in 2010 has given rise to a rapidly growing offshore market for renminbi bonds.

Tencent launched a new version of its WeChat mobile messaging app on Aug. 14 with a feature that allows users to make money transfers to one another by generating a unique QR code – a kind of pixel-based barcode.

China’s central bank banned the practice of payment via code scanning in March. At the time, the People’s Bank of China said it was supportive of innovation, but that proper risk controls to protect customers must be in place.

Currency in circulation made up 4.8 percent of China’s total M2, a broad measure of the money supply, in July. It has fallen steadily from 11.2 percent at the beginning of 2000. While M2 increased 13.5 percent in July, year on year, the currency stock increased just 5.4 percent.