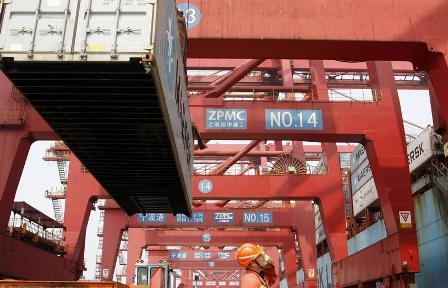 China’s trade figures have joined the country’s growing list of suspicious statistics. Exports to Hong Kong jumped 93 percent year-on-year in March, according to IHS Global Insight, even as shipments to the rest of the world fell. Explanations range from benign to troubling. But however the aberration is resolved, it provides another reason to mistrust China’s official data.

In an otherwise innocuous data release, the Hong Kong figures stuck out. Exports to the region from China in March were $48.37 billion, almost double the amount for the same period of last year, and accounted for 26.5 percent of China’s total exports in the month.

What’s going on? One possibility is that exporters are suddenly routing more goods destined for the rest of the world through Hong Kong’s trading hub. But such a switch is unlikely, especially as direct exports to the United States and Europe were subdued.

An alternative explanation is an increase in the “re-export” trade which sends components and nearly-finished goods to low-tax Hong Kong before shipping them back to the mainland. But that doesn’t fit with the reported $1.8 billion of Chinese imports from Hong Kong in March – a fraction of the trade flowing in the other direction.

A more compelling theory is that companies are inflating exports to circumvent China’s strict capital controls. The country restricts cash from flowing across borders unless it is being used to pay for trade. Economists have long suspected that companies pad out invoices to get around those rules.

This explanation is supported by a growing discrepancy between Chinese and Hong Kong trade data. In theory, China’s exports to Hong Kong should be the same as Hong Kong’s measure of imports from China. In recent years, however, the two figures have diverged.

Even if Chinese producers are exaggerating exports in order to move money back into the country, it’s still not clear why. One possibility is increased investment opportunities, or a desire to beat restrictions on property purchases. Alternatively, companies may be having trouble getting credit.

Whatever the reason, however, it’s another reminder to treat Chinese data with a healthy dose of scepticism.

China saw a mild trade deficit of $884 million in March as a forecast-busting 14.1 percent year-on-year surge in imports eclipsed export growth of 10 percent.
Customs Administration data on April 10 showed import growth far in excess of the 5.2 percent expected, while exports fell just short of the 10.5 percent rise forecast in the benchmark Reuters poll.
However, China’s exports to Hong Kong in the month of March were $48.37 billion, a 93 percent jump on the same month a year earlier.
Analysts at IHS Global Insight said the increase raised questions about the reliability of China’s export data.
“The upshot is that the 10 percent headline (export) growth number masks an uncomfortable reality - either the trade data is unreliable, or if it is reliable, then what are being booked as exports are not actually exports. Either way, this is not an optimistic data release,” IHS analyst Alistair Thornton said.
The Customs Administration said it had begun an investigation into the data, Market News International reported.
“We hope we can find out all the reasons behind abnormal trade growth with Hong Kong and take necessary administrative measures when needed,” Zheng Yuesheng, a customs spokesman and head of its statistics department, told reporters.
(Research by Robyn Mak)