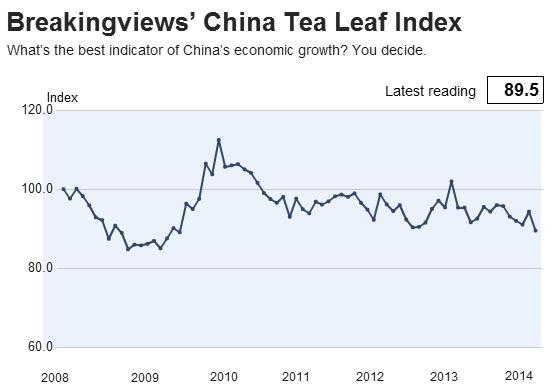 Smog in China is losing its silver lining. Bad emissions were once associated with economic growth, since they meant power plants and factories were active. Citizens broadly accepted the trade-off. But the relationship may be changing. Breakingviews’ latest Tea Leaf Index reading shows growth prospects are the worst since July 2009 – even though the sub-index for pollution is at its second highest average level monthly in six years.

The past month aside, Beijing is no smoggier than in 2009, according to U.S. Department of State data. But the human costs are ramping up. The World Health Organisation estimates one in eight global deaths is caused by air pollution. New-found wealth is no substitute for poor health.

More significantly, awareness has grown because politicians now talk openly about environmental degradation. At March’s parliament meeting, Premier Li Keqiang promised to “declare war” on pollution. Locals have facemasks at the ready when they venture out, and some insurance policies specialise in smog-related illnesses. Nearly half of respondents were prepared to admit that pollution is a “very big problem” in a recent Pew Research survey.

Actions are slowly emerging from the fog. Official air quality readings for harmful PM 2.5 particles have been published since early last year. Loans to heavy polluters have been restricted in industrial hubs such as Hebei, and some particularly filthy factories have been shuttered. Coal plants are moving away from residential areas. Seven carbon trading markets are opening.

Some of these changes may just shift pollution from rich cities to poor ones. But things are moving in the right direction. As government policies make pollution an official public enemy, air quality can become a useful yardstick for cleaner growth. Former securities regulator Guo Shuqing, now a provincial governor, recently vowed to use air quality to evaluate cadres’ performance.

Perhaps China should shift its focus from gross domestic product to a new kind of GDP: gross domestic pollution. Real progress requires systematically tying air quality targets to local leaders’ goals and compensation. Until then, it’s hard to abandon the blind faith in growth that allowed the miasma to fester for far too long.

Air quality data for Beijing shows the average level of small particulates has stayed within a range of 90 to 105 micrograms per cubic meter between 2009 and 2013, according to figures from the U.S. Department of State.

The data on so-called PM2.5 air pollutants measures the quantity of particles smaller than 2.5 micrometers in diameter per cubic meter of air. The full figures for the years 2008 to 2013 were published in March, and Breakingviews’ Tea Leaf Index has been updated to include the historical data.

China’s Premier Li Keqiang said the government would “declare war” on pollution in a major policy address on March 5.