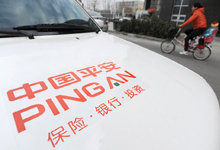 A woman rides a bicycle carrying her child past a car bearing the company logo of Ping An Insurance, in Hefei

The net profit of 54.2 billion yuan ($8.3 billion) for the year to Dec. 31  was the company’s strongest profit growth  since 2003 and was broadly in line with analysts’ expectations for 55 billion yuan, according to Thomson Reuters data.