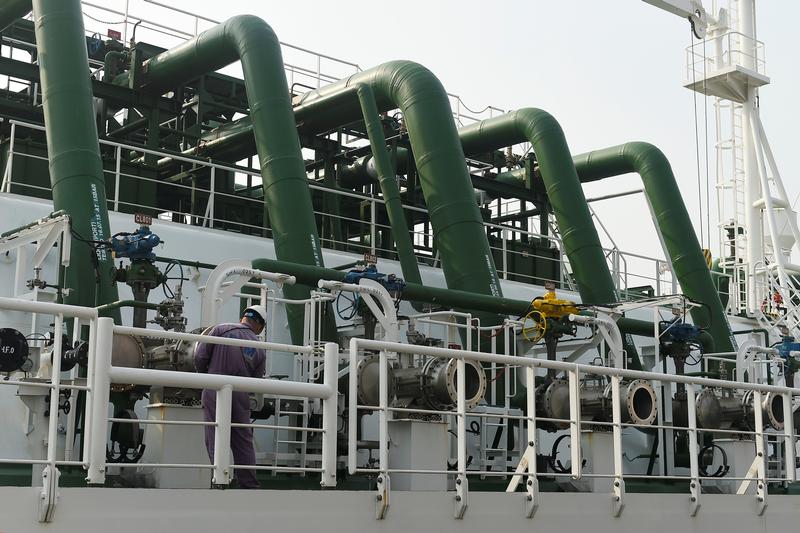 A yuan crude futures contract could finally launch in Shanghai early this year, as the world’s largest importer tries to shake up a market dominated by London and New York. A new benchmark is within reach, but clear-cut success will require the unthinkable: embracing the dollar.

A worker works on a liquefied natural gas (LNG) tanker at a port of the China National Offshore Oil Co (CNOOC) in Tianjin, China November 6, 2017. Picture taken November 6, 2017. REUTERS/Stringer ATTENTION EDITORS - THIS IMAGE WAS PROVIDED BY A THIRD PARTY. CHINA OUT. - RC1E424AAC80

Local media have reported that China could launch a crude oil futures contract priced in yuan as early as Jan. 18, although analysts and industry executives who spoke to Breakingviews believe a later start is more likely. The contract, to be run by the Shanghai International Energy Exchange (INE), has been expected for years, having been first approved in 2014.

The new market will compete with global dollar-denominated benchmarks. Most oil trades are currently priced off two crude derivatives, London’s Brent and U.S. West Texas Intermediate (WTI), traded respectively on the Intercontinental Exchange and the New York Mercantile Exchange (NYMEX) owned by CME Group. The only liquid crude futures in the Asian region is the Oman contract on the Dubai Mercantile Exchange.

State-owned oil firms PetroChina and Sinopec are expected to provide the bulk of trading liquidity, along with independent refiners, hedge funds and some retail investors. Trade will be open to foreign companies.