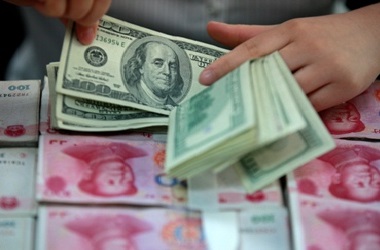 For the second time in less than six months, market turmoil in China is rattling the rest of the world. As in August last year, the trigger is a sudden slide in the value of the yuan, which in turn has dragged down domestic stocks. Though the cause of the selloff is uncertain, the implications for the rest of the world are ominous.

The Chinese currency is down 1.5 percent against the U.S. dollar in fewer than four full days. That’s only slightly less than the supposedly one-off depreciation that surprised global investors last summer. The latest slide has triggered a sell-off in Chinese stocks, twice activating new “circuit-breakers” which suspend trading when the benchmark CSI 300 index moves more than 7 percent. On the morning of Jan. 7, the market closed within half an hour of the opening bell.

Broadly, there are two theories for what is going on. The first is that the Chinese authorities have concluded a hefty devaluation is the least bad solution to the country’s economic predicament. Renewed fears of a currency war have prompted investors to flee major trading partners like Australia and South Korea, while also putting pressure on commodity prices. A barrel of Brent crude oil now sells for little more than $33.

Chinese authorities counter that the yuan is only weak when compared with the U.S. dollar. Measured against a broader basket of currencies, the renminbi was more or less flat last year. Besides, China is still running a healthy trade surplus, which lessens its incentive to seek a competitive advantage by devaluing.

Yet if China really has no grand plan, that gives weight to the second theory: that planners are losing their grip on the world’s second-largest economy. Last year’s bungled stock market intervention and mini-devaluation punctured the myth of Chinese bureaucratic infallibility. The latest ructions reinforce the belief that officials are struggling to reconcile contradictory demands: promoting market forces while preserving stability; and rebalancing the economy while continuing to meet increasingly unrealistic growth targets.

Whether China’s latest market upheaval is by design or default, it’s little surprise that investors are increasingly assuming the worst.

A bank clerk counts US dollar banknotes on bundles of 100 Chinese yuan banknotes at a branch of a bank in Huaibei, Anhui province, April 26 2012. REUTERS/Stringer

China accelerated the devaluation of the yuan on Jan. 7, sending currencies across the region reeling and domestic stock markets tumbling.

The People’s Bank of China surprised markets by setting the official midpoint rate on the yuan at 6.5646 against the U.S. dollar, the lowest since March 2011.

That was 0.5 percent weaker than the day before and the biggest daily drop since last August, when an abrupt near-2 percent devaluation also roiled markets. By 0300 GMT, the yuan was trading at 6.5924, down 0.56 percent on the day.

However, the offshore yuan traded in Hong Kong strengthened slightly to 6.6914.

Shanghai stocks slid 7 percent within half an hour of the open, triggering circuit-breaking mechanisms that suspended trading for the rest of the day.

The Australian dollar, often used as a proxy for China-related trades, fell to a two-month low of $0.7025. Shares across Asia also tumbled.

Fears of a Chinese devaluation hit commodity prices, with the price of a barrel of Brent Crude oil falling more than 2 percent to $33.50.

The China Foreign Exchange Trade System said there was “no basis” for the yuan’s continuous depreciation, and reiterated that the currency was stable in 2015 when measured against a basket of other currencies.