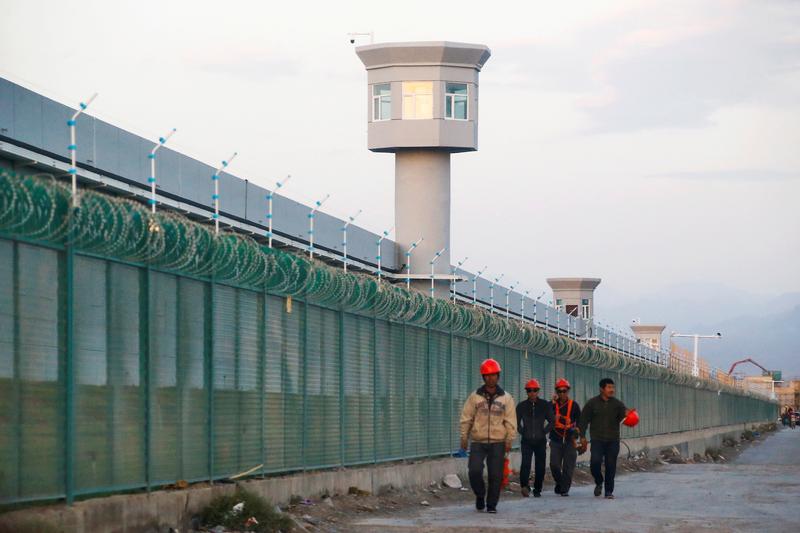 The U.S. stance on Uighur minorities has dimmed trade-talk hopes. But White House hopeful Elizabeth Warren is tougher on human rights and outsourcing than President Donald Trump. His preference for flash over substance should give Beijing more leeway to seal a deal.

FILE PHOTO: Workers walk by the perimeter fence of what is officially known as a vocational skills education centre in Dabancheng in Xinjiang Uighur Autonomous Region, China September 4, 2018. This centre, situated between regional capital Urumqi and tourist spot Turpan, is among the largest known ones, and was still undergoing extensive construction and expansion at the time the photo was taken. Picture taken September 4, 2018. REUTERS/Thomas Peter/File Photo - RC112C876810

The U.S. State Department announced on Oct. 8 that it has imposed visa restrictions on unnamed Chinese government and Communist Party officials it believes responsible for the detention of Muslim minorities in Xinjiang province.

The move comes a day after the U.S. Commerce Department added 28 Chinese entities to its entities list, which restricts U.S. companies from exporting goods to them. The agency cited their role in the Chinese government’s repression of Muslim minorities known as Uighurs.

Separately, Liu He, China’s top trade envoy, is scheduled to meet with U.S. officials in Washington on Oct. 10.