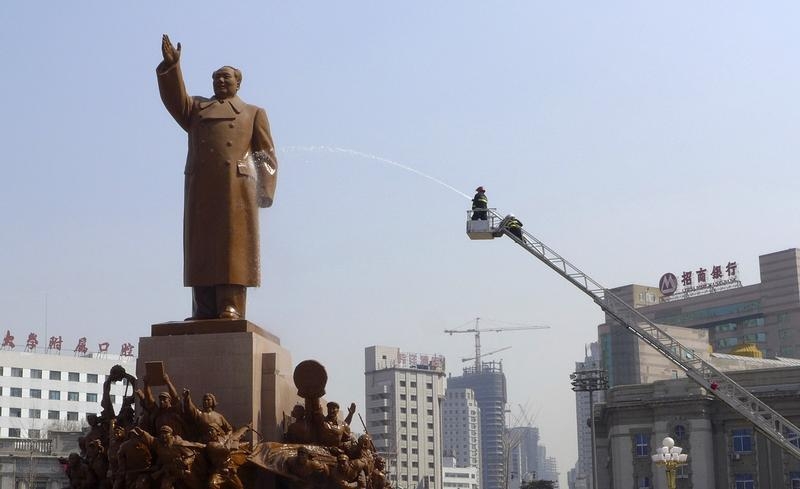 China is in need of history’s biggest spring clean. Two years of reforms have probably stopped the flow of undesirable conduct from increasing. To make behaviour really change, it’s just as important to deal with the stock too: specifically a huge backlog of bad debts, empty houses and dirty secrets.

Start with debt. Lenders are in denial about loans to companies that are unlikely to pay back. According to figures from the Chinese bank regulator, just 1.1 percent of their lending had gone bad by the end of September. Yet that low number doesn’t gel with the two-year low in industrial profit growth, or GDP for 2015 growing perhaps at its slowest rate since 1990.

Understandably, no bank wants to go first. If bad debts were revealed to be 5 percent, lenders would need around $500 billion to restore their balance sheets to their current state of apparent health. The government, as major shareholder, would need to supply much of that. Yet it would be worth it. The mass of covered-over bad debt takes up precious lending capacity – and freed from it, banks would have less reason to fear transparent accounting.

Cleaning up the housing market must come next. China has 49 million units of empty dwellings, according to the wide-ranging but unofficial China Household Finance Survey. Yet homeownership passed 90 percent at the end of September. Most terrifyingly, almost 12 percent of household assets are tied up in empty homes. Prices are sliding, but not enough to attract new buyers. The market is stuck, and huge amounts of wealth are trapped.

To get things moving again, China could do worse than set up a fund to buy back properties that are no longer wanted or can’t be sold otherwise. Those 49 million houses, at roughly 60 square metres each, might be valued today at $1,700 per square metre based on the national average price. Say, the new fund buys at 80 percent of that valuation and resells at 50 percent, primarily to lower-income families living in sub-standard accommodation. It would add $1.5 trillion, or 15 percentage points of GDP, to the government’s debt. No Western country would meddle so openly, but a supposedly Socialist country could do so with ideological impunity.

Finally, there’s corruption. The arrest of Zhou Yongkang, former security czar, showed that the ruling Communist Party is getting tough on high-level graft. Chinese citizens are hearing with increasing regularity about egregious cases like that of General Gu Junshan, who gave out Mercedes cars loaded with gold bars, according to a recent Hong Kong magazine report.

Yet not much has changed in everyday life. People are reluctant to call corruption when they see it, partly because low-level bad behaviour is engrained for them too. Advertisements tout fake documents that allow citizens to buy houses they shouldn’t. Flouting the complex sales tax system is commonplace. Many officials are just lying low until the storm passes, confident that the government can’t get rid of them all.

There’s one way around that stalemate: declare an amnesty for financial misdeeds. China could demand that ill-gotten gains above, say, 1 million yuan ($161,000) be returned over time, with stiff penalties for those who fail to declare and are found out later. It would be deeply controversial, and would have to apply to petty officials as well as powerful honchos.

China tried such an amnesty briefly in the late 1980s with little lasting success. But the climate is different now. Collecting a few top-level scalps as a warning could convince people to buy in. A little creative thinking might go a long way. Perhaps corrupt officials could be made to swap their hauls for zero-coupon bonds issued by the bad-homes bank, redeemable in thirty years or so. Their funds could even be used to recapitalise the banks.

Imagine China goes through with its enormous clean-up. What then? There would be big challenges ahead, not just eradicating bad behaviour but incentivising good. That will only happen when finance, politics and markets are seen widely to be fair and efficient. It’s a task of decades, not just a year. But that ultimate goal can’t even be considered until the slate has been wiped clean – and there’s no time like the present.