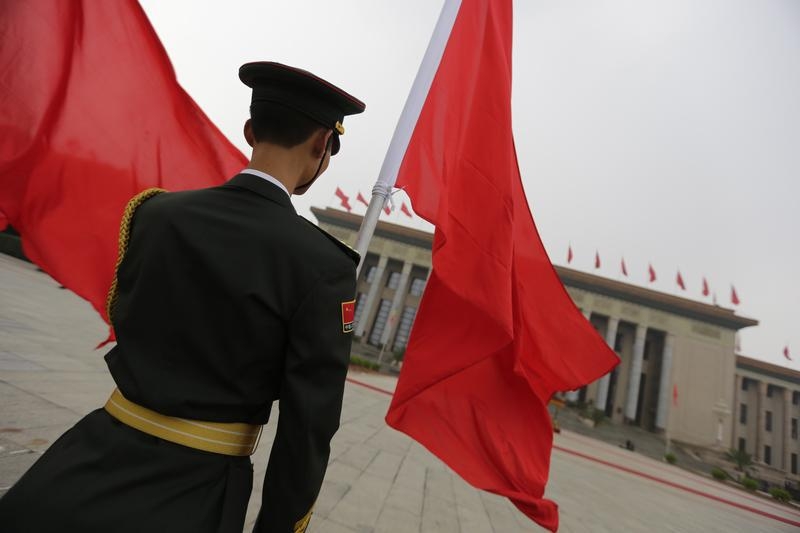 It’s hard to think of a better embodiment of China’s soaring stock market than Shenwan Hongyuan. Shares in the brokerage – newly formed from the merger of China’s tenth and sixteenth biggest trading houses – reached a valuation of $47 billion on its first day of trading. That made it bigger than U.S. brokerage Charles Schwab, and a fitting emblem of political investment mania.

China’s securities houses are surfing a wave of investor exuberance. The listed ones trade at a median 49 times this year’s expected earnings, according to Eikon, more than triple the global peer group. The excitement is mostly confined to the mainland. Haitong Securities’ Shanghai-listed shares cost 49 percent more than the equivalent in Hong Kong. Back in October they were worth roughly the same.

Brokerages benefit when stock markets rise. But the growth of margin trading, where investors leverage bets by borrowing against their shares, has created something of an Indian rope trick. Brokers charge fees of around 8.5 percent on the amount they lend – creating a much more attractive spread than banks get on their loans. Margin credit is around 3 percent of the Shanghai market’s value – more than the New York Stock Exchange. Even regulatory curbs haven’t turned the tide.

There is a genuine case for ebullience. Money effectively trapped in the People’s Republic by capital controls has to go somewhere. Even after the recent spurt, the annualised gain in the Shanghai Composite Index since 2010 is just 2 percent – far behind China’s economic growth over that period. Shanghai stocks trade at an average multiple of 14.5 times historical earnings – hardly stretched by international standards.

Underpinning the boom, though, is a dangerous belief: that the rally can be sustained by political will. As growth slows and industrial profits slide, a roaring market looks increasingly incongruous. It’s true that if stocks were to collapse, many middle-class individuals would feel distinctly less content – an outcome that politicians would like to avoid. But frequent attempts to reverse a bear market didn’t work in the past. There’s no reason to think they would now.

A member of the honour guard holds a Chinese flag outside of the Great Hall of the People, in Beijing.

Shares in Shenwan Hongyuan, a Chinese broker formed from the merger of two securities houses, rose 32 percent on its market debut on Jan. 26 to hit a market capitalisation of $47 billion. That made it the country’s second biggest broker by market value. By the morning of Jan. 28 the shares had fallen to 17.19 yuan ($2.75), valuing the company at almost $41 billion.

Shenyin Wanguo was China’s tenth biggest broker by assets in 2013, according to data from the Securities Association of China, while Hongyuan was the sixteenth. Their combined total assets of 92 billion yuan compared with 192 billion yuan at top brokerage Citic, and 129 billion yuan at Haitong Securities.

The Shanghai stock market reported 779 billion yuan of margin finance balances as of Jan. 26, compared with 266 billion yuan at the end of June. That represented roughly 3 percent of the market’s total capitalisation. The equivalent figure for the New York Stock Exchange at the end of November was 2.3 percent, based on data from the exchange and the World Federation of Exchanges.