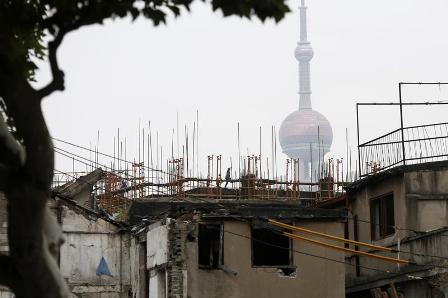 House prices rose at their fastest pace in almost three years in August. Investors like KKR and Blackstone believe they can sift good property from bad. Almost everyone believes the government will never allow the market crash. Neither assumption looks solid.

Construction workers work on the scaffolding of a new building in front of the Oriental Pearl TV Tower in an area where old residential buildings are being demolished to make room for new skyscrapers in Shanghai September 9, 2013. REUTERS//Aly Song

China’s property prices rose 7.5 percent in August from a year earlier, according to official data sampling 70 cities. The increase was the fastest since December 2010.
Prices increased in 69 of the cities, with increases of above 15 percent for Beijing, Shanghai and Shenzhen.
Two plots of land in Beijing and Shanghai sold for record prices in the first week of September, with a residential plot in the capital selling for 73,000 yuan ($11,926) per square metre, at a total of 2.1 billion yuan.
KKR is keen on property deals in China, Joseph Bae, the private equity firm’s managing partner in Asia, was quoted as saying on Sept. 17. “Real estate in China is by nature a very local business, so I think you really need to have very targeted bets: in which city, what [type] of real estate – residential, commercial or retail,” he told the South China Morning Post.
Blackstone, the U.S. private equity group, made an offer of HK$2.5 billion ($322 million) in August for a Chinese property developer, Tysan Holdings, which focuses mostly on residential real estate.