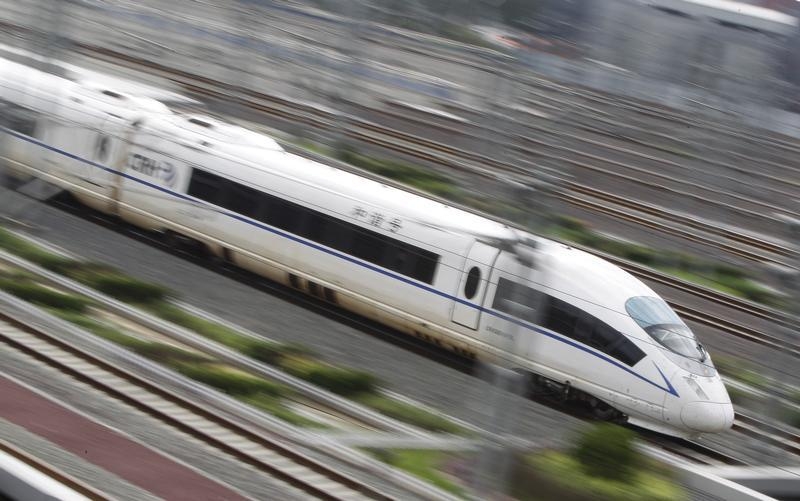 China is re-creating a domestic rail monopoly to improve its competitiveness abroad. Combining the country’s two largest train makers looks at odds with President Xi Jinping’s promise that market forces will play a more decisive role in The People’s Republic. But the new giant should be able to ratchet up pressure on foreign rivals.

Under the terms of the long-awaited deal, state-backed CSR will exchange 1.1 of its own shares for each share in China CNR, valuing the slightly smaller but more profitable train maker at $14.4 billion. The structure of the deal, which still needs various approvals, means that around 16 percent of the enlarged company’s shares will continue to trade in the former British colony.

The potential for substantial synergies helps explain why investors greeted the deal, first mooted in September, with such enthusiasm: the Hong Kong-listed shares of both companies rose by more than 30 percent. The train makers haven’t put a value on the benefits of getting together. But before the deal was announced, Barclays predicted that reduced price competition and a lower bill for research and development would lift the enlarged group’s earnings by 14 percent.

China will now have one bidder vying for foreign contracts instead of two trying to undercut each other. That brings the country in line with developed markets where there typically is only one railway equipment maker. If the enlarged group becomes more efficient it will also pose greater competition for Alstom of France, Siemens of Germany and Bombardier of Canada amidst a resurgence of railroad spending in continental Europe and North America. It also complements China’s efforts to move more goods to Europe by train.

The decision to rebuild the train maker just 14 years after the splitting up the two companies reveals the strength of China’s ambition to export its high speed rail technology overseas. Even if it takes a long time to realize the synergies as in past mergers of Chinese state-owned entities, foreign rivals will feel the heat coming down the tracks.

China’s two largest train builders CSR Corp and China CNR Corp announced on Dec. 30 that they would join forces in an all-share merger.

CSR will issue 1.1 new shares for each share of CNR listed in Hong Kong and on the mainland, valuing its target at $14.4 billion.

Following the deal, around 16 percent of the enlarged company shares will be listed in Hong Kong – similar to the current relative ratio for both companies.

The deal requires the approval of shareholders and various domestic and foreign regulators in order to proceed.

The enlarged company will be called CRRC Corp and have combined assets worth 291.2 billion yuan ($37.5 billion).

Shares in the two state-backed companies were suspended from trading on Oct. 24.

Hong Kong-listed shares of CSR and CNR rose 31 percent and 43 percent, respectively, following the announcement of the deal. The shares listed in the mainland rose 10 percent - the maximum daily trading limit.