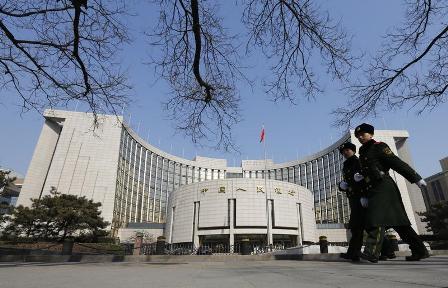 China is getting tough on shadow banks, but not on the causes of shadow banking. New rules will force mainstream lenders to cap their exposure to some of the riskier off-balance sheet products they have sold to customers – in particular, those that are effectively repackaged corporate debt. That limits a big source of risk for banks, but creates a new one for the Chinese economy.

The new regulations target wealth management products: short-term investments generally distributed by banks but that mostly don’t sit on their balance sheets. At the end of 2012, there were 7.1 trillion yuan ($1.1 trillion) of these products outstanding. Of these, 80 percent didn’t appear on banks’ balance sheets, and 80 percent of those were invested in corporate credit such as loans, according to Standard & Poor’s. That’s equivalent to around 4 percent of Chinese banks’ assets – bang on the new limit prescribed by the China Banking Regulatory Commission.

Capping credit-backed products is good for the banking system. Even though most wealth management products aren’t explicitly guaranteed, many investors expect the bank to return their cash. So the new rules limit banks’ exposure if loans go bad. True, this will be painful for smaller lenders which have used the products to circumvent loan quotas and generate fees. China Minsheng, whose shares fell 8 percent on March 28, made 8 percent of its operating income from such products in the first half of 2012.

Yet even if banks are protected, the causes of China’s shadow banking boom persist. The cap on official deposit rates pushes savers towards products that promise a higher yield. Loan quotas mean some private borrowers can’t borrow from banks or the bond market, forcing them to seek alternative sources of funding.

Cutting down on off-balance sheet lending will just create new problems. Companies may be forced to turn to even more shadowy sources of finance, like loan sharks and ill-regulated private lenders. Alternatively, they will go bust, impacting economic growth. For as long as China’s financial system fails to price deposits and allocate loans properly, chasing shadows will be a fruitless pursuit.

China’s bank regulator on March 27 called on banks to monitor wealth management business distributed through their branches, keep clear accounting documentation and limit the credit exposure of certain kinds of product to 4 percent of the bank’s total assets.
The China Banking Regulatory Commission warned that some banks had been issuing products to avoid loan controls. Products affected by the 4 percent cap include those which are invested in “non-standard debt” – including credit assets, trust loans, letters of credit or accounts receivable.
Bank shares dropped sharply on March 28, with medium-sized lenders suffering most severely. Mingsheng tumbled 5.8 percent in Hong Kong, while Merchants Bank slide 4.2 percent in Hong Kong and 4.6 percent in Shanghai.
Banks have been active distributors of short-term wealth management products, the outstanding balance of which totalled 6.1 trillion yuan ($978 billion) at the end of 2012, according to Standard & Poor’s. Only those where the principal is guaranteed are recognized on banks’ balance sheets.
Wealth management products are commonly invested in loans, interbank assets or corporate bonds. Of the 5.6 trillion yuan not on banks’ balance sheets, S&P estimated that 4.5 trillion yuan  represented credit exposure.