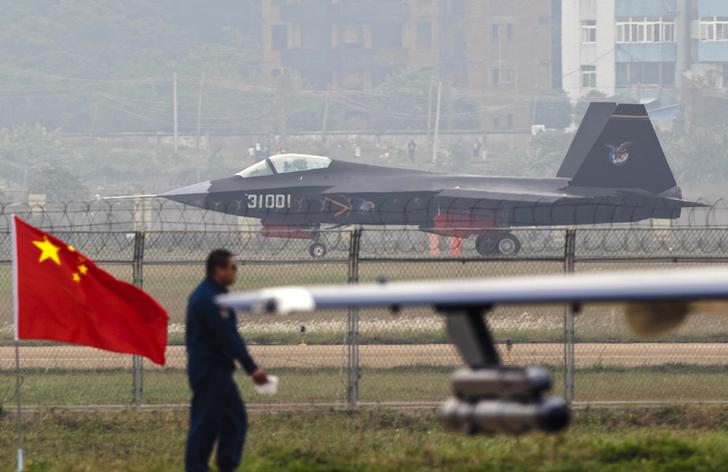 China’s defense outlays may match those of the United States in 15 years. Meanwhile, America’s relative austerity paired with Russian aggression could force European military spending higher. Western makers of aircraft and other weaponry will face new global competition from Chinese companies, though revenue prospects may improve. Governments, meanwhile, may have to choose between just rearming and an all-out arms race.

Accurate data on Chinese military spending is tough to find, but the Stockholm International Peace Research Institute keeps an approximate tally by country. Adjusted for inflation, the PRC’s outlay was still dwarfed by the United States in 2013, accounting for less than one-third of the American total of $640 billion.

But the trends are moving in opposite directions. Over the past three years, spending cuts have been the norm in Washington, with the inflation-adjusted defense budget averaging a 5 percent annual decline. Over the same period, China has upped its investment by 8 percent annually. Assuming the United States follows the trajectory mapped out by the Congressional Budget Office through 2023 and keeps up with inflation thereafter while Beijing keeps boosting its spending at 8 percent a year, China will have the biggest military purse on the planet by 2029.

It’s unlikely to pan out quite like that. China’s economic growth could slow enough to hold back its military ambitions. And Uncle Sam isn’t likely to stand by if a new Asian superpower does vie for armed supremacy. But adjusting for such possibilities changes the timing, not the likely end result.

And whatever the timing, Europe is likely to be forced into a buildup of resources. The American reluctance to spend, together with a less engaged foreign policy than in recent decades, makes it less likely the region will be able to rely as much as it has on U.S. might. The aggressive Russian stance in Ukraine sends a more direct message about the need for heightened self-defense.

Add the effect China’s own military buildup has had on U.S. allies in Asia, and big Western defense contractors could be in clover. South Korea ordered 40 of Lockheed Martin’s F-35 fighter jets last fall. In recent years, Thailand, Vietnam, Cambodia and Indonesia have beefed up their military technology.

That said, Indonesia’s approach hints at the downside for Lockheed, United Technologies and their peers. The Jakarta government was one of the first in the region to begin buying gear from Chinese defense firms. The PRC’s state-owned aviation industry giant showcased its J-31 fighter at a November air show, coinciding with a trip by President Barack Obama to the country. The Chinese jet is intended to compete with Lockheed’s F-35.

It’s probably not up to that task quite yet. But as Chinese defense firms, just like those in other industries, learn to produce better products, they will compete against Western firms for at least some customers. That could make growth a tougher challenge for Lockheed, which sees 20 percent of its sales coming from outside the United States within a few years, and United Technologies, which collected over 60 percent of its net sales from non-U.S. customers last year.

Looking ahead, there may be plenty of business to go around for contractors, even if China becomes a major supplier of aeronautical and other military technology. What’s lost to competitive pressures in markets where governments are willing to buy Chinese hardware could be regained through increased defense spending in Europe and parts of Asia. The biggest challenge may be for those very governments as they try to balance their real and perceived security needs against prudence. One consequence seems clear: the shifting global landscape will put an end to any remaining post-Cold War peace dividend.

China showcased a new stealth fighter at an air show on Nov. 11 in Zhuhai. The J-31, developed by Aviation Industry Corp of China, will attempt to compete with Lockheed’s new F-35 and other high-tech fighters. The exhibition coincided with President Barack Obama’s trip to the region to attend an Asia-Pacific summit.

China showcased a new stealth fighter at an air show on Nov. 11 in Zhuhai. The J-31, developed by Aviation Industry Corp of China, will attempt to compete with Lockheed’s new F-35 and other high-tech fighters. The exhibition coincided with President Barack Obama’s trip to the region to attend an Asia-Pacific summit.