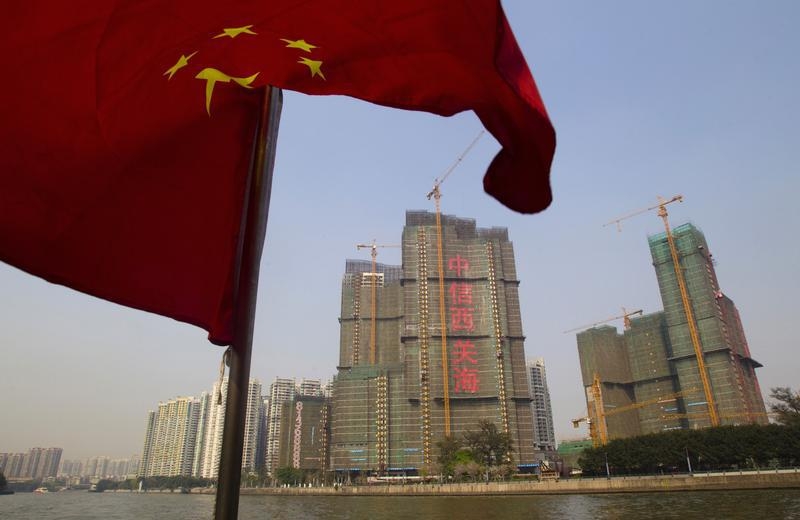 Though it hasn’t been slower since 2009, the pace of expansion in the world’s second-biggest economy is still rapid enough to avert the need for a humiliating stimulus. The big exception is real estate, where some kind of meddling to ease a funding crunch looks unavoidable.

A Chinese national flag flutters on the Pearl River near a construction site in Guangzhou, Guangdong province, March 27, 2014.

China’s GDP increased by 7.4 percent from a year earlier in the three months that ended in March 2014, according to the National Bureau of Statistics. That was higher than the consensus estimates of 7.3 percent. The last time growth was below that level was the first three months of 2009.

Retail sales increased 12.2 percent year on year in March, faster than the 11.8 percent growth for the first two months, but slower than the whole of 2013. Electricity output rose 6.2 percent, compared with a 5.5 annual increase for January and February.

The money supply grew by 12 percent in March, year on year, the lowest in over a decade. That partly came from a decline in new domestic loans, which contracted 9 percent from a year earlier during the first quarter.

Cumulative real estate investment grew 16.8 percent in the first three months of 2014, compared with the same period last year. That’s the slowest pace of expansion since 2012. Meanwhile, the floor space under new housing starts fell 27 percent in the first quarter from a year earlier.

The country’s foreign exchange reserves rose to $3.95 trillion at the end of March, the central bank said on April 15. That marked a $129 billion increase from December.