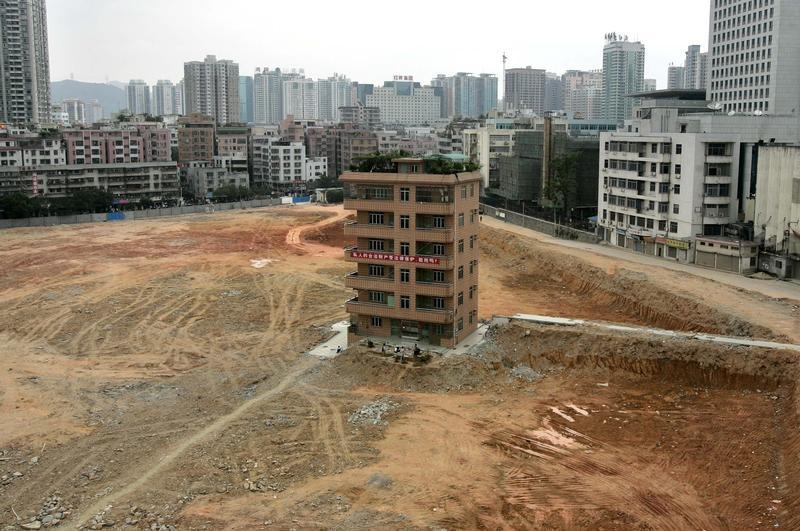 Agile Property is crumbling. The Chinese real estate developer needs urgent financial assistance after the authorities detained its chairman and it had to cancel a $360 million rights issue. The shares fell by as much as 30 percent on Oct. 13. Yet in China’s property sector, it is just the worst of the best.

Chinese developers’ most vital asset isn’t land but cash. They tend to sell projects up-front, and then use the proceeds to pay for construction. But most borrow to buy new plots. Agile’s land bank for future projects has expanded by 20 percent over two years. Its borrowings, including a $475 million loan due to HSBC and Standard Chartered by the end of this year, have increased by 53 percent over the same period. As a result, Agile’s EBITDA in the twelve months to June was just 2.7 times its interest payments, according to Moody’s, compared with 3.5 times in 2013.

When the market is weak, developers can only keep cash flow up by cutting prices. That’s now happening nationally. Agile’s average sales price per square metre between January and September was 20 percent lower than a year earlier. To avoid spooking existing homeowners, developers across China are dangling deals that deliver lower real prices without changing the headline per-square metre price. Buy a flat and get a free balcony!

Even for those developers with cash, problems can develop rapidly. Agile has net debt of around 37 billion yuan ($6.1 billion), just under four times its projected ebitda for 2014, according to Eikon estimates. It has the same amount again earmarked for tax payments, land purchases and building costs on its projects. A detained chairman might not bother homebuyers, but could deter banks and investors from offering more without very favourable terms.

Bad as Agile’s predicament is, the real danger lies beneath ground level. China has thousands of developers, most of whom have no access to bank lending or international capital markets. Added together, the top ten players account for just 10 percent of the floor space sold per year. If smaller developers exacerbate the pressure on their bigger peers by slashing prices, it won’t just be Agile that feels fragile.

A six-floor villa is viewed on the construction site in the central business district of Shenzhen April 17, 2007 REUTERS/Paul Yeung

Agile Property, a Hong Kong-listed Chinese developer, said its chairman had been detained by the authorities, and cancelled a HK$2.8 billion ($360 million) rights issue on Oct. 10. The company’s shares fell as much as 30 percent to HK$3.34 when they resumed trading on Oct. 13.

Chen Zhuo Lin is being held by investigators in the city of Kunming, his wife informed Agile’s board on Oct. 1. The stock was suspended on Oct. 3, the next trading day. The company said it had no information about the cause of Chen’s detention, but that there was no evidence of missing company funds or assets.

Chen’s role will be temporarily filled by his wife Luk Sin Fong, and Chan Cheuk Yin, both of whom were already on the company’s board. Chan was previously vice chairman.

Agile took out a $475 million short-term loan from HSBC, Standard Chartered and Hang Seng in April 2014, due for repayment in December.