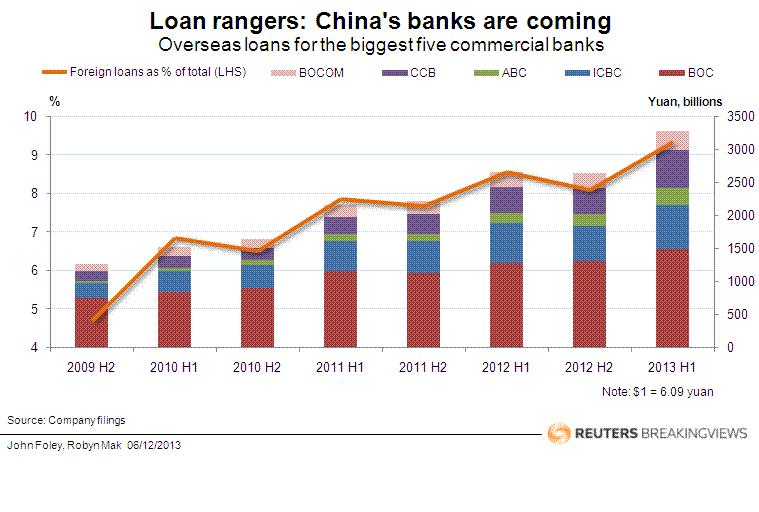 China’s banks are racking up foreign assets, driven by trade flows, and the country’s corporate diaspora. Even at the current slow pace, what today looks like “following the client” could soon become “following everyone’s clients”.

In 2013, China’s lenders abroad mostly stuck with what they knew – servicing Chinese companies. But there were firsts. Agricultural Bank of China started clearing yuan trades in the United Kingdom, and Industrial and Commercial Bank of China issued a yuan-denominated UK bond. Those niche markets can still grow fast: the yuan is now the second most-used trade currency after the U.S. dollar.

Takeovers are the logical next step. A dream pairing of ICBC and UK-based emerging market lender Standard Chartered may be too complex, despite the latter’s sliding valuation. But majority stakes in markets where Chinese companies trade and invest make more immediate sense. China Construction Bank set the tone by buying a stake in Brazil’s BicBanco in November. Africa and Eastern Europe may see similar deals. Even oil-rich Iran could be a target in a future sanctions-free world.

The challenge is not to make the same mistakes as Japan in the 1980s. Fuelled by an appreciating currency and a restrictive home regulator, Japanese banks started expanding abroad. By 1988, six of the world’s 10 biggest banks were Japanese, according to The Banker. When bad debts rose at home the lenders retreated, leaving a credit crunch in their wake.

China’s saving grace may be its banks’ inexperience and government micromanagement. CCB’s BicBanco deal was two years in the making; ICBC has been haggling over Standard Bank’s UK commodities desk for over a year. That limits the scope for impulsive and foolish deals. Capital controls also mean China’s banks can’t easily switch their onshore yuan into dollars or euros, limiting their ability to lend abroad.

Still, China is a land of big numbers. The top five banks’ overseas loans totalled $538 billion by the end of June, double the level of 2010 and close to the size of Ireland’s entire domestic loan book. Even if global banks aren’t yet losing business to China’s mega-lenders, 2014 should see them start to take the prospect seriously.

Agricultural Bank of China announced on Dec. 2 it will offer clearing services for financial institutions in London trading in the Chinese yuan. The clearing scheme, the first of its type in the United Kingdom, will be offered in tandem with Standard Chartered.

China Construction Bank bought a 73 percent stake in Banco Industrial e Comercial on Nov. 1 from the Brazilian lender’s controlling shareholder family, valuing the whole company at $1 billion. The transaction took around two years to come to fruition, according to people familiar with the situation.

Industrial and Commercial Bank of China, the country’s biggest bank by assets, sold 2 billion yuan ($329 million) of yuan-denominated bonds in London in November, making it the second bank to do so after CCB. The offering was four times oversubscribed.

ICBC has also been in talks for over a year to buy the UK-based commodities trading desk of Standard Bank, the South African lender in which it bought a 20 percent stake in 2008.

The five biggest listed Chinese banks had 9.3 percent of their total loan book overseas at the end of June, according to a Breakingviews calculation based on public filings. That compared with 6.5 percent at the end of 2010.