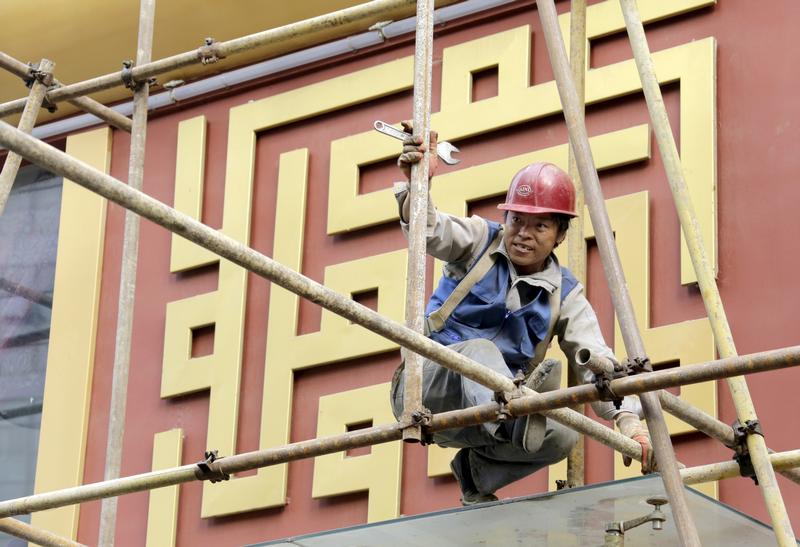 China has posted another quarter of on-target GDP. A recent scandal involving inflated fiscal revenues in northeastern Liaoning shows how easily officials overstate performance. But the mountain of debt propping up growth and funding white-elephant projects is all too real.

A laborer works on scaffolding at a construction side in central Beijing, China, October 16, 2015. China's economic growth eased to 6.9 percent in the third quarter from a year earlier, beating expectations but still the slowest since the global financial crisis, putting pressure on policymakers to roll out more support measures as fears of a sharper slowdown spook investors. Picture taken October 16, 2015. REUTERS/Jason Lee - RTS50TT

China's 2016 fourth-quarter GDP came in at 6.8 percent, the National Bureau of Statistics said Jan. 20. The figure was narrowly ahead of expectations with a Reuters poll of analysts predicting 6.7 percent growth, but well within the target range.

The People's Republic will lower its 2017 economic growth target to around 6.5 percent from last year's 6.5 percent to 6.7 percent range, Reuters reported Jan. 16 quoting policy sources. However, analysts say that growth above 6 percent is not possible without ever larger injections of credit.

China's banks extended a record 12.6 trillion yuan ($1.8 trillion) of loans in 2016 as the government encouraged more credit-fueled stimulus to meet its economic growth target, despite worries about the risks of an explosive jump in debt.

While China's overall debt level is comparable to other developed economies at around 250 percent of GDP, its corporate debt levels are unusually high at 169 percent. The growth rate of debt has also been extremely fast since the global financial crisis in 2008, worrying some economists.