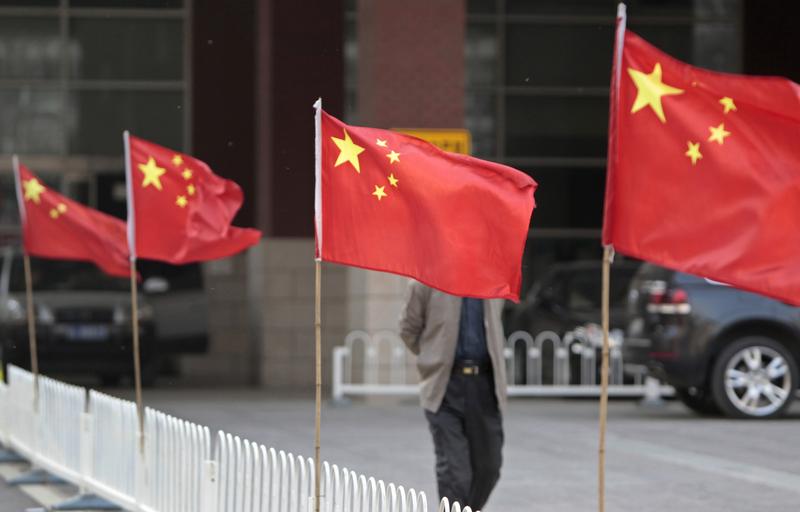 A man walks past Chinese national flags tied to iron fences at Chaoyang Hospital, where blind activist Chen Guangcheng was reported to be staying at, in Beijing May 2, 2012. Chinese dissident Chen left the U.S. Embassy in Beijing on Wednesday "of his own volition" after six days, the Foreign Ministry said, and a senior U.S. official said he planned to stay put in China. The self-taught lawyer left the embassy by car with U.S. Ambassador Gary Locke, who took him to hospital, The Washington Post said. A Post correspondent spoke briefly to Chen on the phone and said he was fine. REUTERS/Jason Lee (CHINA - Tags: POLITICS MILITARY HEALTH) - GM1E8521KKD01

China aims to expand its economy by around 6.5 percent this year, the same as in 2017, Premier Li Keqiang said in remarks prepared for delivery at the opening of the annual meeting of parliament on March 5. Li said China cut its budget-deficit target to 2.6 percent of GDP from 3 percent in 2017.

China's key measures of credit and money supply will grow at a similar pace to 2017, the National Development and Reform Commission said in a so-called work report at the opening of the annual meeting of parliament.

Total social financing, a home-grown measure covering most forms of credit creation and equity issuance in China, grew 12 percent last year, in line with the target. Growth in M2, a broad measure of money supply, slowed to 8.2 percent, below the 12 percent goal.

Each year China hosts two meetings: the annual plenary session of the parliament, known as the National People's Congress and the Chinese People's Political Consultative Conference, an advisory board. During the meetings, government officials present economic targets for the upcoming year for formal ratification.