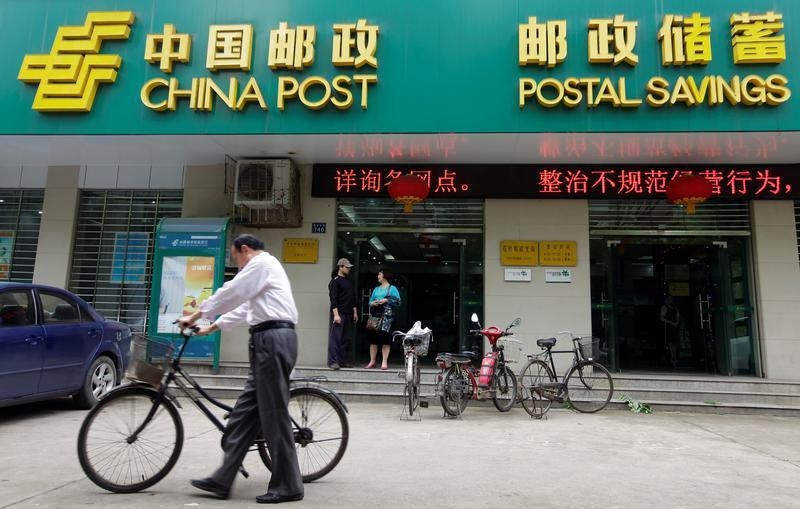 Postal Savings Bank of China began life as part of the country’s postal network. But for prospective investors in the lender’s impending Hong Kong offering, it’s not as safe as such staid origins might imply.

The bank’s broad reach is one of the things that sets it apart from other big Chinese lenders. More than one in three citizens has an account at one of PSBC’s 40,000 branches scattered throughout the People’s Republic. In many rural areas it is the only bank in town, which makes its deposit base fairly sticky – though the growth of internet finance poses a threat to that market position.

PSBC has also made fewer loans to bloated state firms than rivals, which means it has avoided racking up as many bad debts. Non-performing loans accounted for just 0.81 percent of the total at the end of March – less than half the official industry average. With a loan book equivalent to just 40 percent of its deposit base, PSBC has plenty of scope to extend credit to consumers and small businesses.

Yet its sleepy profile masks several risks. For one, profitability is low. PSBC’s return on assets was an anaemic 0.67 percent in March, up from 0.57 percent in December 2013 but still well below the industry average of 1.1 percent. Its core Tier One capital ratio is a skimpy 8.35 percent of risk-weighted assets – though the IPO proceeds will help strengthen this.

The lender has also strayed into riskier assets in an attempt to boost its profitability. At the end of March, instruments such as wealth management products, funds and investment products issued by other financial institutions accounted for 12.4 percent of its $1.2 trillion balance sheet – up from just 2.7 percent at the end of 2013.

PSBC may look safer than many of China’s overextended state lenders. But that doesn’t make it risk-free.

A man pushes his bicycle past a branch of China Post's Postal Savings Bank of China in Wuhan, Hubei province May 4, 2012. REUTERS/Stringer/File Photo CHINA OUT. NO COMMERCIAL OR EDITORIAL SALES IN CHINA - RTX2JQYW

The IPO, which aims to raise between $7 and $10 billion could happen as early as September, IFR reported.
- The state-owned bank has the country's biggest branch network and has 505 million customers – over a third of the country's population.

Its ratio of non-performing loans (NPLs) to the total loan book at the end of March 2016 was just 0.81 percent. That's well below the official sector average of about 2 percent.

PSBC's investments in high-return assets such as wealth management products (WMP), trust investment plans, asset management plans and securities investment funds have risen to 12.4 percent of total assets at the end of March from just 2.7 percent in 2013.

In the second half of 2015, the bank also spent 778 billion yuan ($116 billion) buying bonds issued by China Development Bank and Agricultural Development Bank of China with a duration of between five and 20 years. The bank said it may invest in other long-dated bonds in the future which would negatively affect its liquidity position.