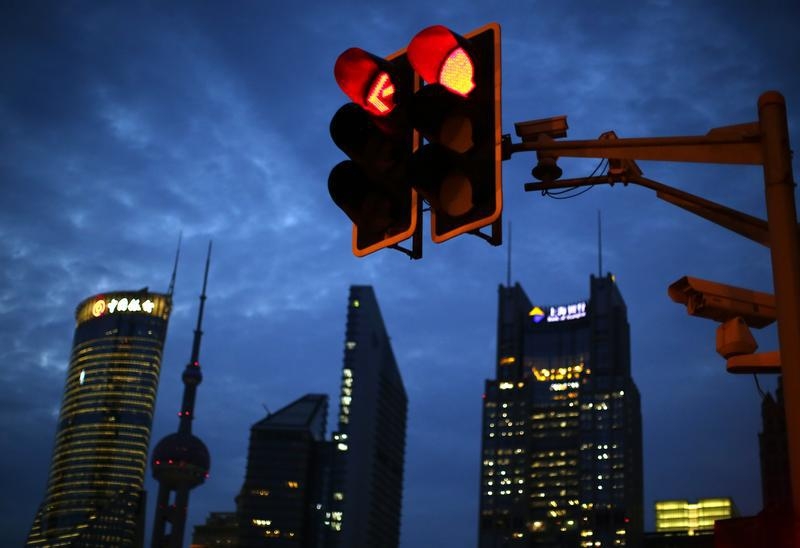 Conglomerate HNA Group has delayed a shareholder vote on its $6 bln bid for U.S. electronics distributor Ingram Micro after the Shanghai Stock Exchange belatedly raised questions about the deal. It’s another unforeseen headache for foreign groups dealing with Chinese buyers.

Traffic lights are seen at the Pudong financial district in Shanghai August 11, 2014. China's fiscal expenditure grew 9.6 percent in July from a year earlier to 1.03 trillion yuan (99.7 billion pounds), the finance ministry said on Monday, indicating the government is slowing budget spending as the economy shows signs of stabilising. The spending growth cooled from a rise of 26.1 percent in June. REUTERS/Carlos Barria (CHINA - Tags: BUSINESS) - RTR41ZWK

Tianjin Tianhai delayed a shareholder meeting to approve its $6 billion acquisition of electronics distributor Ingram Micro after the Shanghai Stock Exchange asked for more information about how it is funding the deal, the Chinese company said in a press release.

Tianjin Tianhai, a subsidiary of Chinese conglomerate HNA Group, rescheduled its shareholder meeting from July 22 to July 29 after the Shanghai Stock Exchange requested additional details on the size, duration and interest payment on the loan the company is using to fund the purchase.

The exchange asked for details on how the additional debt would affect Tianjin Tianhai's asset-to-liability ratio, and requested more information about how the listed company planned to repay the loan.

The exchange also wants more information about any post-deal exit plan for a Chinese co-investor and other risks from the transaction, as well as whether the company expected any issues involving regulatory approval.

A spokesman for Tianjin Tianhai said the company would make "a concerted effort to answer all of the questions raised by the exchange within the time limit."

The Shanghai Stock Exchange letter asked for all of their questions to be answered by July 19, and requested supporting "opinions" from independent financial advisers and lawyers in addition to information provided by the company itself. Ingram Micro could not be reached for comment.

Tianjin Tianhai agreed in February to buy Ingram Micro in an all-cash deal worth $38.90 a share, including a $400 million break fee. The U.S. company can walk away with the cash if Tianjin Tianhai does not obtain Shanghai Stock Exchange clearance for the acquisition by Aug. 15, according to regulatory filings.

Ingram Micro shares closed at $35.08 on July 20. Tianjin Tianhai's shares have been suspended from trading since February 5.