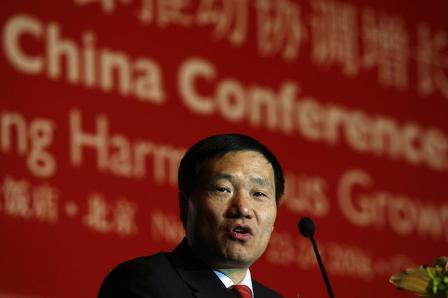 As head of China’s new market watchdog, Xiao Gang has a tough mission: to bite the hand that fed him. While head of Bank of China, he oversaw an unprecedented lending spree that helped get China’s economy out of a hole. His next mission, as boss of the China Securities Regulatory Commission, will be to beef up the country’s capital markets – weakening the big banks’ stranglehold.

China urgently needs to fix its equity markets. Nearly 900 companies are waiting to go public, but low valuations make opening the floodgates a non-starter. Outgoing CSRC head Guo Shuqing tried to clean up the over-pricing of initial public offerings and lure foreign investors, but was reassigned after just 17 months in the job. Weak governance and strong insider culture have kept investors at bay: Shanghai’s trailing price to earnings ratio languishes at 11.5, less than half its ten-year average.

Equally important is to create an advanced debt market. Bank lending still accounts for over half of new financing, while companies and infrastructure projects can’t easily sell bonds to insurance companies, pension funds and investors. Wealth management and trust products have proliferated, but they may leave banks who sold them on the hook when things go wrong.

The CSRC deserves little credit for what growth there has been in the bond markets so far. Most corporate issuance happens in the commercial paper market, which is overseen by an agency of the central bank. Long-term corporate bonds, which the CSRC supervises, account for less than a tenth of annual bond issuance, and are still fraught with red tape. Complicating things further, borrowers tend to be bailed out before they default, so investors have little incentive to price corporate debt properly.

Xiao’s experience of the banking sector puts him in a good position to help break the big lenders’ chokehold. But those expecting revolution may be disappointed. At Bank of China, Xiao’s most notable achievement was to more than double the bank’s loan book in less than four years, faster than his biggest rivals. It’s likely his promotion owes much to doing as he is told – which may not be what China’s markets need.

Xiao Gang stepped down as chairman of Bank of China on March 17, in a move that paves the way for his appointment as head of the China Securities Regulatory Commission. The move took place amid a wider reshuffling of ministerial and other agency positions as China’s annual parliament, the National People’s Congress.
Guo Shuqing, the outgoing head of the CSRC, is expected to be named governor of Shandong province, after only 17 months as head of the securities regulator, Reuters reported on March 14. Under Guo, the CSRC has introduced new rules to crack down on inflated prices for new stock offerings, and increased the opportunities for foreign investment to enter China’s equity markets.
Xiao warned of the dangers posed by off-balance sheet lending in an editorial for China Daily in October, describing the way financial institutions handled certain wealth management products as being “fundamentally a Ponzi scheme”. He also called for enhanced supervision of the “shadow banking” sector.