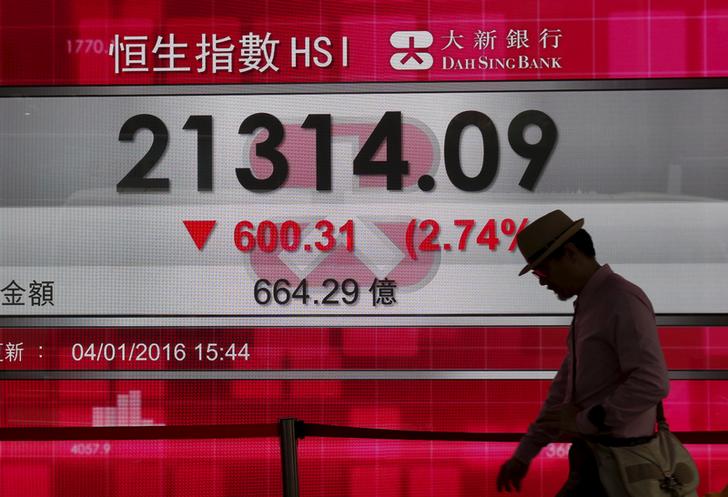 Falling shares triggered new “circuit breakers” on their first day of operation. The yuan is at its weakest since April 2011. Growing signs of an economic slowdown are feeding the jitters. But the turmoil is also a delayed reaction to previous flawed efforts to prop up markets.

A man walks past a panel displaying the benchmark Hang Seng index during afternoon trading in Hong Kong, China January 4, 2016.

Chinese stock markets tumbled 7 percent in their opening session of 2016 as weak factory activity surveys and falls in the yuan added to concerns about the struggling economy, forcing exchanges to suspend trade for the first time.

Early losses quickly snowballed in the afternoon, with trading suspended around 0530 GMT, about 90 minutes before the regular close.

Selling intensified after a brief 15-minute trading halt early in the afternoon when the main indexes had shed 5 percent. Activity in Shanghai and Shenzhen was halted for the day soon after.

It was the first day that so-called “circuit breakers”, intended to curb volatility, took effect.

The yuan fell to its lowest level against the U.S. dollar since April 2011 after China’s central bank fixed the official exchange rate at 6.5032 per dollar, 0.15 percent weaker than the previous fix.

The offshore yuan weakened to 6.6125 per dollar, close to a five-year low it touched last week.

A new index of the yuan’s value measured by China’s main trading relationships ended the year at 100.94, implying a near-1 percent appreciation during 2015, China Foreign Exchange Trade System (CFETS), a unit of the People’s Bank of China, said on Jan. 4.